Political labour exchange: What Lithuanian MPs do after the end of their tenure 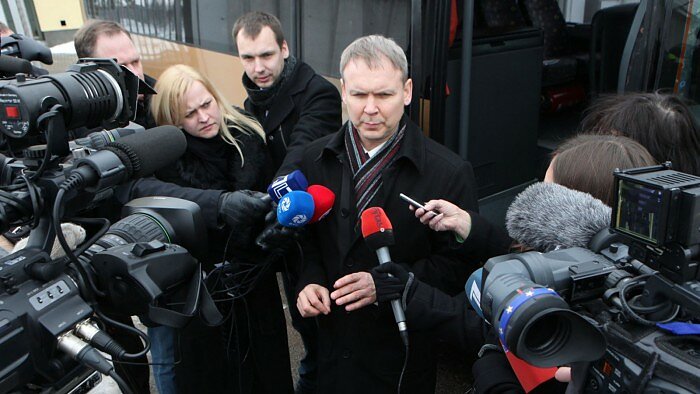 An entry “Member of the Seimas” in one's CV does not necessarily guarantee a successful career. Very few former MPs have made it in business or other areas unrelated to politics. Some politicians even end up at the labour exchange. In most cases, however, former MPs can rely on the support of fellow party members. More influential friends can secure one a post in some public institution or diplomatic service, but more oftern just an assistant desk in the office of a luckier party colleague.

An entry “Member of the Seimas” in one's CV does not necessarily guarantee a successful career. Very few former MPs have made it in business or other areas unrelated to politics.

Some politicians even end up at the labour exchange. In most cases, however, former MPs can rely on the support of fellow party members. More influential friends can secure one a post in some public institution or diplomatic service, but more oftern just an assistant desk in the office of a luckier party colleague.

Relief after the end of term

About sixty MPs had to vacate their offices after October's general elections – they either failed to secure re-election or decided not to run for another term. Česlovas Juršėnas, a Social Democratic veteran of Lithuanian politics, will not be a member of the Seimas for the first time since 1990. The politician is now appointed to sit on the board of the Lithuanian National Radio and Television.

The 2008 elections brought many novices to parliament, most of them led by master entertainer and TV producer Arūnas Valinskas. For many of them, the 2008-2012 term was their first and last.

One of them, singer and TV personality Donalda Meiželytė, admitted to the media that her last day in the Seimas made her extremely happy. “I am not a public person any more. I do not have to explain myself – it is great happiness and freedom. I will now go from one TV project to another, I will be very visible,” Meiželytė was jubilant about retiring from politics and returning to entertainment business.

Arūnas Valinskas – who led a party of entertainers to parliament – also returns to television and showbiz. Meanwhile his former colleague Antanas Nedzinskas – a singer known for his somewhat oddball persona – continues to go to the Seimas every morning, as if to a job, listening to the new MPs from the visitors' balcony. Nedzinskas says he still hopes to return by winning a ballot in either Zarasai-Visaginas single-member constituency or Biržai-Kupiškis. He has not decided yet which of the two constituencies – they will have to repeat ballots within six months due to election violations – he will choose.

From MP to adviser to an MP

Singer Ligitas Kernagis, who was even appointed to head the Counter-Corruption Committee in the last Seimas, failed miserably during his bid for re-election. Nor, however, does he want to go back to stage.

Aurelija Stancikienė, MP with the Path of Courage Party, extended a helping hand to former fellow parliamentarian. She offered him a job of her assistant-adviser.

Kernagis says his duties will include advising on “the main strategic issues” – nothing to do with party politics, but rather public events and communication with voters. “I will not be drafting documents,” the former MP insists. “But I will sing instead.”

“Will I run in the following elections? We will see. If there is support, why not?” Kernagis says.

Many of those who came to politics straight from the entertainment business have had enough of it. Why? “Many do not wish to return. Job in the Seimas is not an easy one, it involves the burden of publicity. Everyone loves you before the election, but they hate you afterwards,” Kernagis speculates.

“He was driving a cart yesterday, while today he is the smartest person of them all,” Vytautas Kvietkauskas, journalist and member of the Supreme Council-Reconstituent Seimas in the early 1990s, is unforgiving to politicians whom only official posts inspire for great deeds. “People like that don't go back to where they were before the Seimas tenure – they find it too tasking.”

Kvietkauskas was elected to parliament in 2000, but did not last until the end of the term. In July 2004, he resigned amidst suspicions of taking a bribe.

Between 2005 and 2008 Kvietkauskas worked as director of the Association of Municipalities of Lithuania, then spent a year running Balto Media, a company owned by Achema group. And now he is back where he started – Kvietkauskas hosts two radio shows and voluntarily chairs the Lithuanian Paralympic Committee.

“If you have a profession, you won't have trouble finding a job after parliament. But should you loose your skills and professionalism, it will get tough. Life is moving at a fast pace nowadays and when you work in the Seimas, there's not much time left for renewing your skills. It makes perfect sense that parties take care of their people. It is easier for me, a journalist, I essentially do the same thing I did before. After all, both politicians and journalist make a living by talking.”

Kvietkauskas says keeping one's skills up to date is tricky to entertainers as well as people of other trades – the public may forget or loose all interest in some of them during their “political entr'acte.” Afterwards, people keep pointing fingers: That's the Seimas member who got into all that mess. They usually do.

The cart-driver complex – when a former MP would not go for anything less than a high ministerial or ambassadorial post – has not afflicted Aleksandras Abišala, a former MP and once even a prime minister of Lithuania.

“I've asked people several times: Introduce me as a top consultant, not a former prime minister,” laughs Abišala, who was minister at large between 1991 and 1992 and even the acting prime minister for four months in 1992. “One cannot erase history, I am not ashamed, rather proud of what I've done, but it somewhat disturbs me.”

Abišala admits that after leaving parliament, it was difficult at first to return to his former job as a physical scientist. “Two and a half years in the Seimas, a year and a half before that in the Sąjūdis movement, got me so drawn in that I hardly had any time to pursue my professional interests. I spent too much time in politics to be able to successfully transition back to academic work. But it wasn't difficult psychologically, as I had made the decision to quit politics some time before,” he says.

Political experience, though, came in handy for Abišala and eased his career as a business consultant. He started working as one after giving up his parliament seat in late 1992. Abišala has been consulting ever since and has no ambitions of returning to politics. The last time anyone suggested he should run for parliament was in 1996.

Some politicians, following unsuccessful elections, find a place in party structures – a post in their party secretariat, municipal government. Unelected politicians sometimes become assistants or advisers to their colleagues or, if they are lucky, might even land a post as vice-ministers or diplomats. As if ordinary jobs were beyond their reach.

There are quite many examples of that.

Abišala says he does not judge former elected officials who cling to politics at all costs. “Many of them acquire good skills of statesmanship. Being in big politics gives you much experience. It would be a waste to give all that experience up, it would not make any sense economically. These people can bring use to their parties, state institutions, or the diplomatic service. True, in some cases, it is merely to do with finding a cosy place for one's friend. But it is too Lithuanian an interpretation.”

Abišala would like to see less rotation in the Seimas. It would leave fewer people wondering what to do after each election – and would help nurture a class of professional politicians.

After this year's general election, over half of all MPs retained their seats. In Abišala's view, it would be optimal to replace about one fourth of the Seimas every four years, giving a good balance between experience and youthful innovation.

Another former prime minister, Gediminas Vagnorius, worked in the Seimas from 1990 to 2004 without interruption. He is not, however, very eager to return to a high political post.

He ran for parliament again in 2008, albeit unsuccessfully. Vagnorius now lives off his signatory pension – thanks to his putting a signature under Lithuania's declaration of independence in 1990 – which is about 3.5 thousand litas (a thousand euros), before taxes. What fills his days? The former prime minister leads the Christian Party, which did not get into parliament this time, and writes commentaries every week.

“I have plenty of work. The only difference is that I am a free man now. I wasn't free for many years,” Vagnorius tells 15min. “It did not make me any richer, but I'm glad I could contribute to reforming the economy and establishing Independence. My only regret is that I neglected academic work during my political career.”

He says that after he failed at re-election, he did not even think of looking for a job. Leading a party leaves no spare time for much else. “In the West, it is usual that politicians refrain from going into business after quitting high public offices – for fear of conflicting interests. I did not want to create a questionable situation like that. There wouldn't be a conflict any more now, but I have an interesting and meaningful job that I do.”

Artūras Paulauskas, former parliamentary speaker and leader of a once formidable political party, lost elections in 2008. He tried at first to revive his devastated party, the New Union, but eventually gave up and merged with the Labour Party, while making a living practising law. This year Paulauskas returns to parliament as a Labour MP.

Meanwhile Saulius Pečeliūnas, a signatory of the 1990 Independence Act, might have to turn to labour exchange for the second time. He failed to get re-elected in 2000, following ten years in politics, and had to find a job. He signed up with labour exchange, but it wasn't until almost two years later that Pečeliūnas got a place in the Customs Department. In 2004, the conservative was elected to parliament again and spent two terms as an MP. This year, however, proved less successful. Should 56-year-old Pečeliūnas fail to find a well-paid job, he will be eligible to receive a Signatory pension.

Another independence act signatory Gintaras Ramonas ended his life tragically. After spending two and a half years in the Seimas, he was forced to turn to labour exchange. He unsuccessfully tried to make a career in theatre and finally ended up selling records in an open-air market. People's taunting and deprivation broke the young man and he took his own life in 1997, at 34.