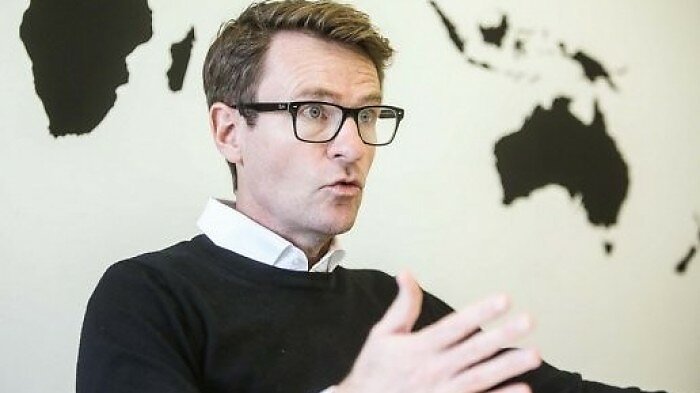 Mats Persson marvels at the changes Vilnius has undergone since his first visit to Lithuania just three years ago. The Swedish head of Adform, a Denmark-based specialist in multi-screen brand advertising, comes to the firms' Vilnius office several times per month, and is impressed by the pace at which the Lithuanian capital is developing.

Mats Persson marvels at the changes Vilnius has undergone since his first visit to Lithuania just three years ago. The Swedish head of Adform, a Denmark-based specialist in multi-screen brand advertising, comes to the firms' Vilnius office several times per month, and is impressed by the pace at which the Lithuanian capital is developing.

“It is exciting to observe such rapid changes. For instance, taxi services have changed quite a lot. Previously, a taxi ride was akin to suicide, whereas now drivers have new cars, speak English, are polite, and you can even get a cash receipt”, says the executive director.

Founded in Denmark twelve years ago, Adform currently has 12 offices in Europe (Sweden, Denmark, Norway, Finland, Germany, Italy, Spain, Lithuania, Czech Republic, the Netherlands, Belgium and Great Britain). At the start of its operations in Lithuania, Adform employed about 50 specialists. That number has now grown to almost 300, and Mr Persson promises further increases in the next two years, which will bring the total to 500.

I live in Sweden and work in Denmark. When I go out for dinner in the evening with my friends, they are surprised: “Oh, you work in Denmark. That should be difficult. The Danes are different after all”. The only thing I can say is that people like to compartmentalise. Generally speaking, I see no differences between the Swedes and the Danes. And there are no big differences between the Scandinavians and the residents of the Baltic States either. Naturally, Europeans and, let us say, the residents of India and China differ, but this is a matter of great cultural difference.

So, there are no big differences between us, only those we ascribe to others ourselves. Certainly, individual groups of people, for example, rural and urban residents, are different.

To what extent was the decision to open an office in Vilnius influenced by lower labour costs?

That is a fact – in Lithuania, labour force is less expensive. Salaries are lower, but don’t forget the additional taxes paid by the employer to the state.

Although overall costs comprise perhaps a half of what we would pay in western countries, we always say that costs are just the icing on the cake.

When Adform made the decision to open an office in Lithuania, lower salaries were not the main reason but rather a lateral outcome. We established an office here because we had a very professional Lithuanian working for us in Denmark. Smart people often know a lot of other smart people. This Lithuanian did too, only his acquaintances happened to live in Lithuania. That was how the cooperation started.

You mentioned that in Lithuania competition for skilled employees is intense. What makes your company attractive?

Certainly, it goes without saying that remuneration is important, but this is important for people both in Lithuania and in Scandinavia. It is just that in India, for example, poverty is always around the corner. There, an additional 100 dollars per month is important to the extent that people are willing to change jobs even for a small difference in salary. Here, this does not work.

Attention should be paid to the culture of the company. We do not believe in the type of company structure created during the industrial revolution, when a factory needed a manager, a leader. We hire professionals and we expect them to perform as such – make decisions, initiate processes. And this is attractive for employees.

I believe informality, too, is important at work. If you come to our office and see a group of people talking in the hall, you would not be able to tell a programmer from a manager.

What additional incentives do you offer your staff?

It is very important for employees to feel that their work is appreciated and recognised. For some of them, this is the key factor. We do not believe in the effect of monetary premiums. What counts is when we hear that a person needs an iPad and they get it for good performance.

We use a Kudos reward system, where employees might get a box of sushi or some nice coffee for an achievement at work. This reward system is important.

When you’re having dinner with friends, you might boast that you got an iPad, rather than saying: “I completed a project well yet again and got a 9% premium; but I am concerned as to why I got 9 instead of 10. I always used to get 10%.

Some economists believe that traditional capitalism is running out of steam and experiencing a crisis. Do changes in the economy affect the structure of a traditional company as well?

I believe that 80% of a company’s success depends on the organisational culture and only 20% on the structure. Organisational structure alone does not determine success; it is determined by people and their attitudes.

It could be said that it is people who change. Everything is happening so fast that the business environment is becoming complicated. It also changes how quickly you can create value, achieve success and establish a company. Organisations with hierarchical structures are being replaced by dynamic cooperation.

Lithuanian entrepreneurs are often criticised for allegedly being unwilling to share profits with their employees, whereas Scandinavian business culture is often presented as an example of the opposite approach.

In Scandinavia there are also many hierarchical companies that do not share their profits. It is just a difference between the histories of the countries. We cannot ignore the fact that Lithuania has been establishing itself in terms of business for slightly more than two decades, whereas in Sweden there has not been a war for several hundred years. For all that time, the culture of companies and the legislative basis for the business environment have been developing.

Naturally, in Sweden there are some new companies, such as Spotify, which are growing rapidly and becoming a role model for Scandinavian company management. Perhaps there are more examples like these in Scandinavia, but some five years from now we will no longer be unique. It is possible that we are among the first in Lithuania, but in the future we will not be the only ones.

By the way, some time ago I attended a Scandinavian companies’ event. Company representatives shared their own experiences of working in Lithuania and I realised that substantial differences exists. One entrepreneur said he was working in forestry. He flew in to Vilnius and then went straight to work in the regions. The people he met were quite different from those I meet when working in Vilnius. I realised that his experience of working in Lithuania was quite different from mine.

In 2013, one in five Lithuanians was earning a minimum salary of EUR 290. What incentives can be offered by employers paying these salaries?

What was the minimum salary?

In October it was about EUR 290 per month.

EUR 290? We do not have salaries like this in our company.

Is it possible that an employer paying this amount can be attractive to potential employees?

No. I do not believe that would be possible. Like I said, I do not believe in monetary premiums and I do not think that money attracts people to work in certain companies, but a decent salary should still be on the table. An employee should earn enough so that they are not constantly thinking about their salary.

If employees have to constantly think and worry about their salary, it means that this issue is not resolved. It means the person is paid too little. However, when the issue is finally resolved, then we can talk about other motivations to improve the employee’s performance.

I believe the majority of those earning the minimum salary can’t be happy with that. I do not believe any one of them go to work thinking that all is well and that they are appreciated for their work.

Certainly, a minimum salary can be tolerated as a starting salary, but then an employee should be promised career opportunities and an interesting job. This should be included in the story.