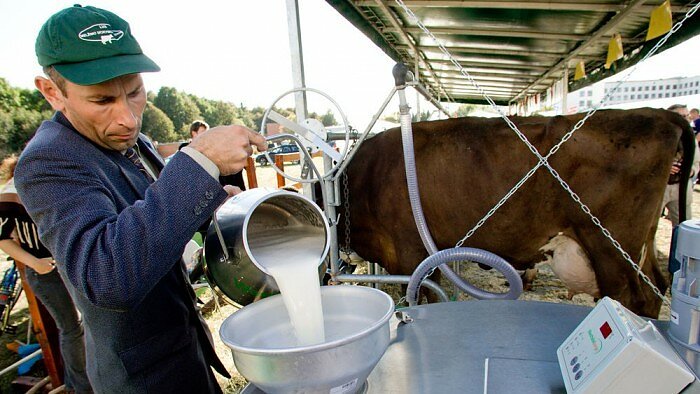 They are doubtlessly the strongest dairy plants in the Baltics, since their competitors in Latvia and Estonia are incomparably smaller and the two dairy markets are more divided. In the somewhat smaller Estonian market, for instance, there are 9 “majors” with far less production capacity than their Lithuanian colleagues. In Latvia, there are ten major players. The biggest of them, Rigas piena kombinats, has a turnover which is merely half as big as the one of the Lithuanian “big five.”

The Lithuanian dairy market leaders publicly insist that their main goal is to offer as much quality production as possible and to increase their competitiveness. Market researchers, on the other hand, say that the true goal of Lithuania's largest dairy plants is, or should be, to get even bigger in order to be able to compete in the global market.

According to Lilija Tepelienė, head of the Meat and Dairy Department at the Ministry of Agriculture, the dairy sector is growing in importance in the overall economy, since analysts predict that consumption of milk and dairy products in the world is on the rise.

Lithuania exports over 50 percent of its total dairy production. Last year, exports totaled 1.6 billion litas (464 million euros). The bulk of it went to Russia – 85 percent of all the exports to the third countries. In the dairy industry, unlike energy, Lithuanians can work with Russians splendidly, the latter rewarding cooperation and quality products with long-term contracts.

However, Russia never neglects to mention that it holds all imported production to particularly high quality standards and whoever fails to meet them gets shut out. Lithuanian entrepreneurs have had opportunities to learn that Russians mean business and therefore work particularly hard to make sure their production is admitted into the luscious Russian market.

Soon, however, Lithuanian dairies might face some serious obstacles – Russian entrepreneur Andrei Beskhmelnitsky acquired a controlling stake in Rigas piena kombinats. The Russian's name is associated with Danone-Unimilk, so the transaction instantly set off rumors that the new investor, who has considerable experience in the dairy products industry, can make it tougher for Lithuanians to both sell their production and buy raw milk in Latvia and Estonia.

“We have not had a chance to meet Mr Beskhmelnitsky, but Lithuania is a good place to develop dairy industry – due to its favorable climate, fertile soil. So there is plenty of space for a new player,” board chairman of Rokiškio sūris, Dalius Trumpa, shows no fear of additional competition.

He admits that Lithuanian dairy plants are very small compared to some of those in other EU countries. However, Rokiškio sūris, which controls about 20 to 25 percent of the Lithuanian market, does not envisage any easy way to expand in the domestic market: “The Competition Council and the society at large are inclined very much against further concentration in the sector. The process is complicated as it is, and if we have to face additional obstacles, nothing will come out of it.”

Therefore the company directs all its efforts towards expanding as buyer of raw milk. Rokiškio sūris has bought two companies in Latvia and is closely cooperating with partners in Estonia. Starting this year, it will start buying milk in Poland, too.

“Poland is a big country with massive resources of milk and only a small distance away from us – so it makes sense importing raw milk from there,” Trumpa sums up the business idea. There were other tasks in his business plan for 2012 as well – like automatizing manual labour in its Lithuanian plants and making products of higher added value.

Žemaitijos pienas, too, has purchased a company in Latvia. In its 2011 financial report, the dairy processor states that one of its goals is to become a strong, well technically equipped, reliable, and attractive company.

Algirdas Pažemeckas, the biggest shareholder in Žemaitijos pienas, has recently handed over the running of the company to Tadas Vizgirda, a man with little experience in the dairy industry. The choice raised many eyebrows, considering the relative closeness of the company.

Some compared Vizgirda's quest into Žemaitijos pienas to Don Quixote's fight with windmills. Others, more familiar with the dairy industry and head hunting, were also surprised – two members had prematurely left the company's board, Alvydas Žabolis of Žabolis ir partneriai, a private capital investment group, and Arūnas Šikšta, the head of TEO.

Their mission was to increase the value of the company, too.

Vizgirda told 15min that his task was to expand Žemaitijos pienas' exports and modernize the company. “The production side at Žemaitijos pienas is already modern enough, so I will try to introduce western management principles in order to ease the team's work in export markets; I will also try to make certain processes more efficient.”

Vizgirda has only been with Žemaitijos pienas for a few months, but he says he has already made contact with potential buyers in the US and is waiting for the first round of big contracts.

“I have close relations in the US whom I visit often, so one could say I am also a consumer in that market. The goal of Žemaitijos pienas is not only to be present in emigrant communities but also to enter the shelves of majors grocery chains and sell under its own brand,” Vizgirda says.

Recent rumors in Latvia had it that Beskhmelnitsky was going to concentrate the dairy industry in his hands by acquiring Estonia's Tere – a company that ranks number four right behind the Lithuanian “big three” – and Lithuania's Žemaitijos pienas.

After the talks spread, market players began wondering whether Vizgirda was not hired specifically to prepare the company for sale. Asked whether Beskhmelnitsky could in fact be eyeing Žemaitijos pienas, he merely commented that matters of this sort were decided by shareholders.

Nor do seasoned dairy business veterans rush to conclusions – according to them, a new leader might be invited in order to bring fresh air to the rather stuffy industry.

To support their doubts they quote the recent departure of Žabolis, who is thought to be the best mergers and acquisitions consultant in the dairy industry, while Pažemeckas himself, owner of Žemaitijos pienas, is notorious for making decisions and then doing the exact opposite the next day.

Pieno žvaigždės once courted Latvia's Valmieras Piens, but the company was later acquired by Latvia's former prime minister Andris Škelė. So now Pieno žvaigždės continues to invest into processing in Lithuania, while buying up raw milk from Latvian and Estonian farmers.

The company's three branches are located in the north of Lithuania, so this kind of cooperation is convenient geographically. Pieno žvaigždės imports almost one fourth of its raw milk from farmers' cooperatives in the neighboring countries.

“It is an old truism that the victors are those countries that import raw materials and export finished production. Processing creates jobs, people are paid salaries, state coffers get filled with tax revenues,” says Algimantas Paspirgėlis, purchase director at Pieno žvaigždės.

The company buys over 60 percent of raw milk from farms that sell over 500 kilograms of milk daily. Pieno žvaigždės offers over 500 different products to domestic and foreign markets.

Paspirgėlis is happy about the fact that as dairy farms grow in size, the seasonal nature of the industry diminishes in importance. Extremely large farms have achieved near stability in milk output throughout the year. There are farms that produce even more milk in winter.

Over the first nine months of 2012, the buying up of milk in Lithuania grew 5 percent compared to the same period last year. The Ministry of Agriculture estimates further growth in both output and buying up of milk.

However, the Ministry has one more piece of news – starting in 2015, industry players will have a new competitor, a cooperative processor that is to produce new-generation dairy products and powdered milk.

The cooperative company, Pienas LT, is planning to build a plant in Kaunas Free Economic Zone.

“With additional competition, the market players will be forced to optimize their production. Experience shows that the bigger the number of market players, the more competition there is in the market and the bigger benefit it brings to the consumer,” Tepelienė of the Ministry of Agriculture assures. She adds that a more competitive raw milk market can lead to growth in milk production in Lithuania and the two other Baltic states.

The major processors, however, protest against this project supported by the Ministry, resenting that the future company, to be run by farmers themselves, keeps getting exceptional treatment that no other player is entitled to. Moreover, they doubt if the new company will be able to compete in the market, joking that, should the project fail, the Government will have to buy up its production.

Despite controversial views, the project is moving forward after a period of relative stillness. Pienas LT has already chose the equipment supplier.

According to plans, the new plant should be finished by the end of 2014. It is projected to process over 235 thousand tons of milk annually – or 650 tons per day.