President of ECB in Lithuania 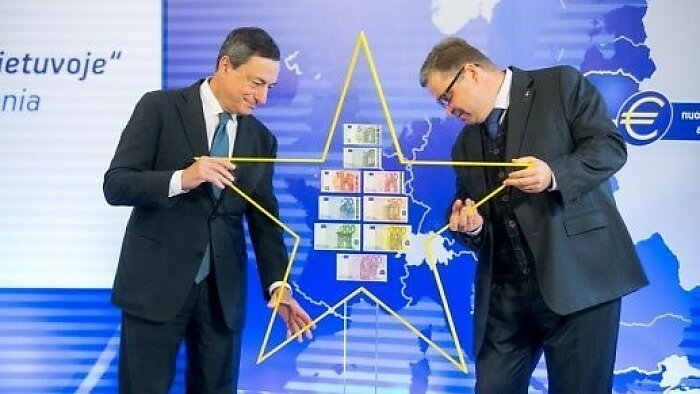 President of the European Central Bank Mario Draghi handed a symbolic Euro Star to Governor of Bank of Lithuania, on the occasion of Lithuania's joining the Euro zone, in January 2015.

Euro Star is a symbol confirming that the National Bank of Lithuania has been accepted into the Euro family. It is traditionally presented to the countries adopting the European single currency.

The results of the poll published on Wednesday showed a near-tie between Euro supporters and opponents in Lithuania, with 47 percent in favour and 49 percent against.

Shots from the International conference of Lithuania's path to Euro zone

Draghi arrives at the presser

MARIO DRAGHI, President of the European Central Bank:
As far as I would say, you mentioned the geopolitical risk, I am not in the sense the best equipped person to comment on these issues, but surely to be part of the same Euro family, it should be, it should make people feel safer.

VITAS VASILIAUSKAS, Governor of the Bank of Lithuania:
My opinion as a chief of the central bank is that stability is a virtue. I think that with the shared currency we eliminate one of the biggest risks, to name it, the risk of currency exchange rate. This gives stability. Stability and deeper integration are two main factors, which mean welfare and perspectives for such small and open economy as Lithuania.

MARIO DRAGHI, President of the European Central Bank:
I can restate what the governing council's unanimous commitment is: to use also other unconventional instruments within its mandate, if it were to assets worsening in the medium term outlook for inflation.

MARIO DRAGHI, President of the European Central Bank:
The experience of the Baltic countries shows two, three things. It’s the capacity to run fiscal consolidation in a growth friendly way, both as far as composition of consolidation and timing of consolidation and basically mastering public support behind these efforts, precisely because these efforts were growth friendly. I mean this is, I wouldn't call it a lesson, I don't like to give lessons to anybody, but it is a powerful message.