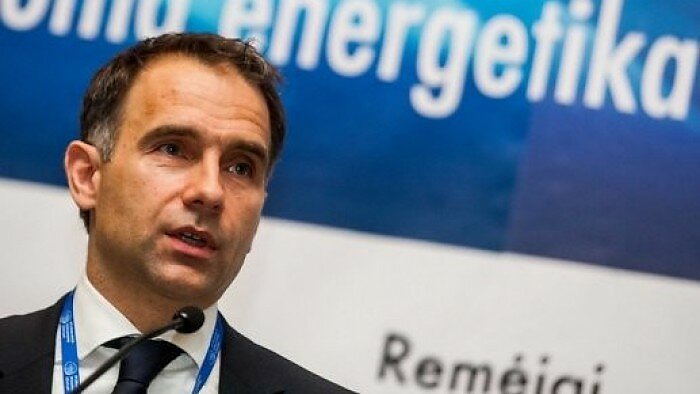 As the head of state-owned oil company Klaipėdos Nafta, Masiulis was already at the helm of a crucial project in Lithuania's energy policy - Klaipėda liquefied natural gas (LNG) terminal. The floating LNG storage unit, pointedly named Independence, should anchor in Klaipėda within months, providing an alternative to - and therefore greater independence from - the Russian gas monopoly.

Are you confident now that Independence will start operations as planned?

There will be some stress until the very last day, just like in any other big construction project. We are now concluding final arrangements, testing equipment. Let's hold our fingers crossed until the end and hope nothing unexpected happens.

You are planning to look after this child of yours until it stands firmly on both feet?

I'll look after it as much as I can [laughs].

The offer to be minister was unexpected and rather quickly processed?

It was unexpected indeed. It came from [leader of the Labour Party Loreta] Graužinienė.

What are your relations with the political elite?

I am not a politician, nor a party member, never been in any party. I know Ms Graužinienė from before - we used to work together at the Audit House. Our paths would occasionally cross after that, so Loreta knows me quite well.

Did you meet with the president and the prime minister about your appointment?

No, I haven't had the chance. Loreta took care of everything.

You must have already have contact with the leadership of the Labour Party, where one person is the official leader [Seimas Speaker Loreta Graužinienė], while the one pulling the strings [former leader, MEP Viktor Uspaskich] is in Brussels? Have you spoken to both Ms Graužinienė and Mr Uspakich?

Yes, I have spoken to both and their positions are identical: that the energy sector must be managed transparently, that the party has no vested interests, that it wants things to be done most transparently, clearly and to the benefit of Lithuania.

Your predecessor Jaroslav Neverovič was forced out because his own party's leader exerted unjustified pressure on him to act unwisely. Aren't you afraid of something similar happening to you?

I haven't thought about such things - if one knew where one would fall, one would put a pillow. In life, you must go forward assuming everything will be all right, as long as you do your job.

As minister, where will you focus your attention first?

First, I'd like to ensure a smooth handover of the helm of Klaipėdos Nafta, so I'm reassured that it continues successfully without me. Another step - to study all the other projects. I will look through what has already been done by the ministry: what are its positions and achievements. And then I'll make my own mind up.

You are credited with introducing a great deal of transparency into the running of Klaipėdos Nafta, which exposed you to scorn of those who preferred those waters muddy. Your appointment shows that Lithuania does have enough political will for transparency in the entire energy sector. Do you feel the weight of expectations?

I try not to think of that too much, but rather to concentrate on duties day-by-day, even though transparency is indeed one of my priorities. This is what I did in Klaipėdos Nafta, this is what I'd like to continue in the entire energy sector.

Besides solving day-to-day problems, a minister must have a vision.

Certainly. I will form a vision once I look at all the projects.

For example, the nuclear power plant project has been in a limbo and in desperate need of decisive actions. Are you ready to take responsibility for moving this issue out of its current deadlock?

It's a huge and highly complex issue. At first I'd like to study it and form an opinion, consider all the pros and cons, to see how it fits into the government programme. It's too huge a question for me to engage in superficial speculation.

Can we expect you to publicly state your position once you're more familiar with the issue?

You have put together an efficient team at Klaipėdos Nafta. Are you bringing some of your people to the ministry?

[Laughs] I do not plan to yet. A well-tuned team works in the ministry, too, so I need to use the opportunities already in place.

What about personal life? You had you first-born in August. Will the minister need to commute between Vilnius and Klaipėda?

My wife and I are moving to Vilnius. So I will commute to see my son only across the city.

Did your wife agree to you accepting such a huge responsibility?

My wife has always backed me. She is my strongest supporter. We both discussed the issue closely and comprehensively. And agreed that this was a post of great responsibility and one where I can do some good for our country. Therefore I had to take it.