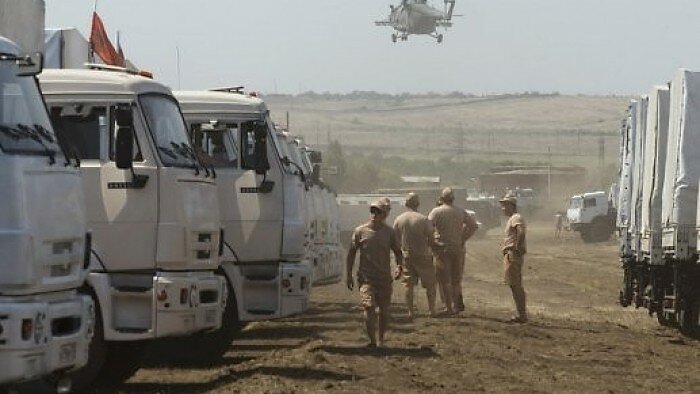 On the night between 11 and 12 August, a convoy of 280 Kamaz trucks set out from Moscow to East Ukraine, loaded, according to the Moscow Oblast authorities, with humanitarian aid for civilian residents in the war zone. Even though the Russians immediately marked the convoy with the International Red Cross flags, the organization itself had no knowledge of it. It was not until 16 August that the Red Cross received the manifest of the shipment.

On the night between 11 and 12 August, a convoy of 280 Kamaz trucks set out from Moscow to East Ukraine, loaded, according to the Moscow Oblast authorities, with humanitarian aid for civilian residents in the war zone. Even though the Russians immediately marked the convoy with the International Red Cross flags, the organization itself had no knowledge of it. It was not until 16 August that the Red Cross received the manifest of the shipment.

Over the four intervening days one thing became very clear: no one in the world believes anything that the Russians say any more. And losing trust is much easier than gaining it back. Even this apparently noble humanitarian mission served only to increase suspicions.

On 6 August, Russia suggested at the UN Security Council to send a shipment of humanitarian aid under the flag of the Red Cross. The Security Council voted down the proposal. As the British representative aptly put it, Russia cannot rescue the nation it itself pushed into the conflict. However, the convoy plan was silently moving forward.

Innocent-looking on the outside

On 14 August, a convoy of 262 Kamaz trucks appears somewhere east of Belgorod and arrives in Kamensk-Shakhtyorsk. Members of the press in Kamensk-Shakhtyorsk are offered to open any of the sealed trucks, interview the drivers and take photos. It is hot. The drivers, stripped to the waist, show off their untrained bodies. The reporters rule out the version that they might be disguised members of the Russian special forces, although one of the drivers does sport a paratrooper tattoo on his shoulder. There are two drivers per truck. If each were given a gun, that would make 520 armed men to reinforce the separatist ranks in Luhansk. Their age is suitable for military service.

The trucks indeed contained drinking water and grain. What's surprising, though, is that the trucks are half-empty. Several explanations are offered: the vehicles are too new and cannot carry the full load; in an alternative explanation, if one truck breaks down, its cargo can be loaded to another one.

The more observant reporters note that the trucks, no licence plates on them, are painted white only on the outside, while the inside is of the shades more becoming to military equipment. Why, they wonder, doesn't Russia use the assets of the Ministry of Emergency Situations which has experience of work under similar circumstances and, in fact, owns equipment just for such purposes.

It turns out that the drivers are not even professionals in long-distance deliveries, but rather a group assembled from different places. All have licences to drive trucks, though. There is no data about their military training. In all, they appear a rather taciturn bunch and when they do speak, some inconsistencies come up. One says he is a volunteer, while another blurts he's been generously paid. A third one says he responded to an ad two months ago. Therefore the operation must have been in preparation for some time now.

Why, then, does the mission not include the Ministry of Emergency Situations? And why did it not have proper papers necessary to pass the customs, something that the senders of the aid must have definitely known. Spokespeople of the Ministry claim that, when they receive a humanitarian aid proposal, they carry out a detailed research and, within a week, draft a list of items the recipients are in most urgent need of. In this case, it is unclear who put together the shipment and how adequate it is to meet those needs.

While everyone's wondering what this odd humanitarian mission is all about, a reporter from The Guardian spots a convoy of 23 armoured military vehicles illegally crossing the Ukrainian border from Russia. Anton Gerashchenko, adviser to the Ukrainian minister of the interior, says the humanitarian convoy is just a "PR game" meant to cover up a dispatch of military assistance to the terrorists.

Even if Ukrainian officials did not have special equipment to properly screen the convoy, smugglers could share their tricks of the trade: how much stuff could be hidden under double floorings and walls. Ammunition, automatic weapons and mine-throwers add considerable weight to the shipment, hence the half-loaded trucks.

However, I have another theory about why the trucks are empty. There are other ways to transport weapons, after all. In a press conference a few days ago, the new "prime minister" of the so-called Luhansk People's Republic Alexander Zakharchenko boasted about 1,200 fighters who had come after a four-month training camp in Russia, bringing along 150 units of equipment, including 30 tanks.

To my mind, the trucks were sent half-empty for the simple reason that there must be as many of them as possible. The goal of the operation is to take the white Red Cross-marked trucks, rather than what's inside them, into the terrorist-controlled territory of Ukraine.

On 16 August, Ukraine, having received the shipment manifest, officially recognized it as humanitarian aid from the Red Cross. After inspection, the white Kamaz trucks will also be recognized as part of a humanitarian mission. The situation in Donbas is complicated, therefore who knows when the trucks will make their way back to Russia. There can be million excuses for delays - and Russian soldiers are good at coming up with them.

In early summer 1968, joint military manoeuvres of five Warsaw Pact states took place in Czechoslovakia. When they concluded, soldiers of three of the countries left, while the USSR convoy unexpectedly broke down on the way between Prague and Bratislava. The soldiers set up a camp and started "repair works". These lasted well into August, when the crackdown of the Prague Spring began. The "broken down" Soviet column headed straight for Prague.

The trucks with the Red Cross aid can very easily break down in the terrorist-held territory, someone can mine them or even blow up the roads. Once they're stuck in Ukraine, god forbid someone should open fire at them - after all, they are sent by the Red Cross on a noble mission. Judging by reactions to Israel's actions in Gaza, the international community shows particular indignation when UN objects get hit. 262 trucks under the Red Cross flag are something even more impressive than a UN school in Gaza. The Ukrainian forces will not be able to fire a single shot.

So many white trucks can be dispersed across towns and villages, dispatched to wherever the Ukrainian forces are planning an offensive. To stir up the global indignation, one could even be blown up and the blame put on Kiev.

The vehicles could provide an indispensable shield for the terrorists. They could use the white Kamaz trucks to fire missiles or throw mines, to safely transport fighters. They could be used to encourage the terrorists, motivate them to go on with fighting, promising that, in case things go wrong, they will be safely taken to Russia whereupon they will be showered with generous honours and rewards. Militant islamists believe in virgins who await them after they die as martyrs, while the pro-Russians prefer to collect their dues in this life.

The terrorists in East Ukraine have employed the tactic of shielding themselves with civilian residents on a number of occasions. In Slovyansk, they would set up their firing points in residential buildings, their first rocket aimed at a civilian aircraft was launched from the roof of a student dormitory, while the Buk system that downed the MH17 flight was hidden in the middle of a village.

A plethora of suspicion surrounding the convoy somewhat distracts one's attention from its true goal, but they way events have developed gives one the impression that Russians are desperate to deliver their trucks to the territory. Hence the refusal to cooperate with the Ministry of Emergency Situations, since it could have provided alternative means of transport; hence the refusal to drive via Kharkiv and reload the shipment onto Ukrainian trucks; hence the attention-grabbing commotion over the military equipment accompanying the convoy, so that everyone misses the true goal of the operation, which is to hand over the white shield to the terrorists. Russians made everyone wonder what's inside the trucks and forget about the trucks themselves.

The distraction provided by changing routes, delaying the shipment manifest, and other seeming problems is a perfect cover for the true goal of the mission. On 12 August, Russia's Foreign Minister Sergei Lavrov personally announced that the Ukrainians had finally realized that reloading the shipment would only add to the cost of the mission and therefore had agreed not to do it.

If Ukraine agrees to let the trucks in, the shield they will provide - in addition to 2,000 tons of food, tents and sleeping bags - will allow the terrorists to go on until the parliamentary elections in autumn.

While the president was elected by the entire nation and therefore low turnout in Dombas made little impact on the legitimacy of the overall results, the elected MPs represent specific regions. Should the terrorists manage to hold on until autumn, they will be able to disrupt the elections and achieve that certain places in east Ukraine fail to elect representatives to national parliament. Unrepresented, therefore not entirely part of Ukraine. And that is very much in line with what the Kremlin wants - confusion and uncertainty in Donbas.