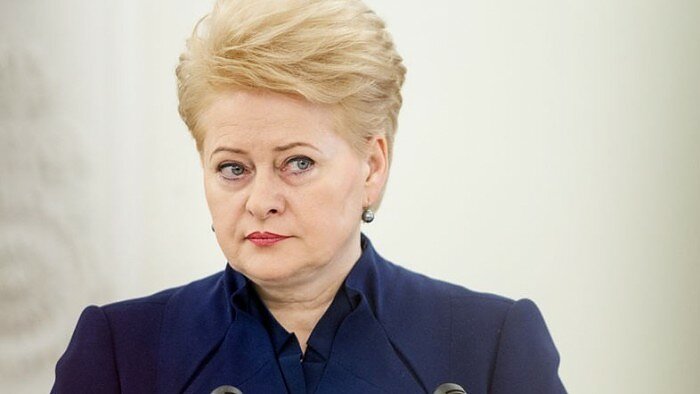 As her second term begins, President Dalia Grybauskaitė held a press conference on Monday, in which she indicated six key items for the next five years.

As her second term begins, President Dalia Grybauskaitė held a press conference on Monday, in which she indicated six key items for the next five years.

“I sometimes call my first term the crisis management and economic stabilization period. This new term will indeed be different, and I hope that we can all devote it to improving social wellbeing, quality of life, purging public service, strengthening economic ties with our neighbours, and strengthening the country’s defence,” said Grybauskaitė.

The first item on the agenda is the assurance of social security. Grybauskaitė spoke about adding additional funds for the lowest welfare section and reducing social exclusion. According to the president, the latter is best achieved by increasing the minimum wage. She has also paid attention to stimulating youth employment.

The second item on the agenda is related to national security and military defence. Grybauskaitė claimed that cooperation with NATO was an important guarantee of Lithuania's security.

"Our allies will help us, our defence plans will be accepted and adjusted by NATO summit in September, this fall. I will be attending this meeting and the documents are being prepared right now. The defence of the Baltic countries, the Baltic Sea, and Poland will be included as a priority in the new NATO strategy, as well as our own defence plans,” she added.

The third item is the assurance of energy security and Lithuania's energy independence. Specifically, it comes to the completion of the liquefied natural gas terminal, electric connections to Sweden and Poland, and construction of gas link to Poland.

"We have to continue thinking about price reduction (of energy) to prevent the recurrence of the price spurt of heating, and to ensure energy security, which means supply and diversity. It is necessary to invest more in alternative energy,” the president added.

The fourth item on her agenda is fight against corruption, which has already become Grybauskaitė’s signature cause. The president repeatedly emphasized the importance of this goal throughput the previous term too. This time, Grybauskaitė said the aim was to follow the example of the Nordic countries.

"Corruption is a problem that prevents the development of any nation, it robs the people and concentrates resources only in the hands of individual interest groups and, in this way, undermines national growth and citizens' wellbeing."

According to her, the problem is not only domestic, everyday corruption, but also the large-scale corruption, which includes the misuse of European Union funds, non-transparent public purchases, and the thrive of political nepotism.

The fifth item is the country's economic growth.

"This means continuing preparation for the adoption of the euro in order to prevent price increases, to ensure that there is no loss of earnings, and to prevent artificially high prices. It is also the task for the Government and I will pay close attention to it,” said the president. She also spoke about the need to reduce economic disparities between regions.

The sixth item is the security of information, as well as cyber security.

"Someone is investing into making Lithuanians cease to be proud of their country, become apolitical. So one of the tasks for myself is to make you believe that we have to enjoy living in our country, but also work in the manner which will enable us to be proud of it, and that no one can ever belittle us.”

Grybauskaitė provided several options when asked about the ways to tackle propaganda against Lithuania.

According to her, the national broadcaster, the Lithuanian Radio and Television (LRT), will no longer be dependent on commercial advertising and, instead, will be financed exclusively with public funds, so it will be given an opportunity and an obligation to educate the public.

"Surely, they will be able to really think about public interest and the country first. This means that there will be a much broader program, including all of our minorities, to make everyone less used to and affected by the propaganda of our neighbour (Russia), which is not always benevolent. Moreover, of course, our public institutions, our Ministry of Foreign Affairs, diplomatic services will have to invest more. Links with global Lithuania will be strengthened. So there will be a lot of channels,” the president added.

According to the president, the information-propaganda war in Lithuania's geopolitical region will go on for a while, so one cannot relax.

SSD must prepare for changes

In the context of information security, the State Security Department (SSD) was also mentioned. According to the president, it must have already started working by the new Intelligence Law adopted in 2013.

“As for now, the SSD is not fully operational, because it fails to prevent the threats; it only outlines them. It is a huge flaw of the current governing body. I think that this particular governing body is not able to fully carry out its functions and should make appropriate decisions about it. So far, I can only see an attempt to blame it on the lack of funds, which leads to inability to perform their functions dictated in the new law. This is a very poor excuse for any manager, to name lack of funds as the factor which prevents them from performing their functions,” said the country’s leader.

"I think that it is time for this managing body to end,” she added.

The president also promised to do everything to prevent the law enforcement body from abusing human rights and confidentiality of journalist’s sources.

The former spokeswoman of the president, Daiva Ulbinaitė, found herself in an awkward situation when she was accused of abusing her post and disclosing a state secret.

Ulbinaitė is suspected of leaking information provided in the Security Department’s report, which included information about the establishment of the new section in Russia's administration for the Baltic states and that one of its targets might be Grybauskaitė. However, prosecutors admit that no state secret was actually disclosed.

Currently, the head of the State Security Department is Gediminas Grina, but there is no doubt that it is prone to change.

When asked about looking for a new head of the State Security Department, Grybauskaitė said that there are always candidates for a post: “We will have one when there is a need.”

When commenting on the Attorney General’s office, Grybauskaitė said that the decision will be taken following court verdicts. As is known, Darius Raulušaitis serves as acting Attorney General, as the permanent Attorney General Darius Valys has been temporarily suspended, until the end of a police investigation into a traffic accident he caused.

What to do with vice-ministers?

When asked about how she intends to ensure that all the ministers in the Cabinet choose the right vice-ministers after their re-approval, Grybauskaitė said that she believed it will be ensured by the law enforcement agencies, because they “follow the new Intelligence Law directly and openly.”

"Every newly approved or re-approved minister will have to re-apply to the authorities and get their opinion on the (vice-ministerial) candidates. I hope that none of the ministers will dare to take personal responsibility after receiving controversial information about one or another person,” said the president.

After the Special Investigation Service had given a list of vice-ministers entangled in risky situations, the president set an ultimatum: either the ministers lay off the vice-ministers mentioned in "the black list", or she will not approve the ministers who disagree with her views. The ruling coalition decided to dismiss all vice-ministers indiscriminately and let the ministers form their teams from scratch.