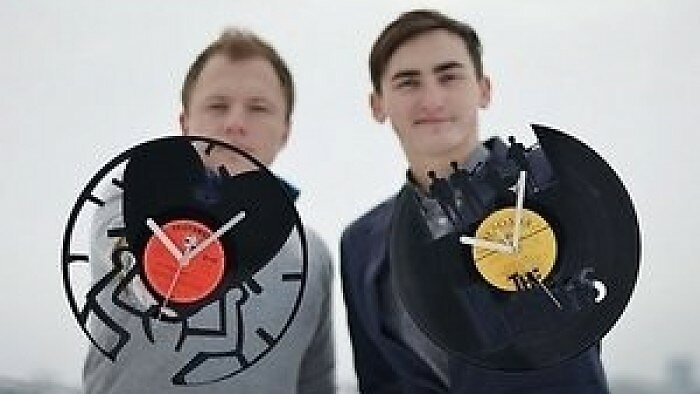 The Beatles vinyl records which are not used to play music anymore can be taught to tell the time – the idea two Lithuanian entrepreneurs, 27-year-old Laurynas Mazeliauskas and 22-year-old Žilvinas Kuprėnas, have proven business-viable. The founders of Crop Shop who are making original clocks from old vinyl records say that they are going to conquer the world as their ideas are becoming more and more attractive to customers not only in Lithuania but in foreign countries as well.

The Beatles vinyl records which are not used to play music anymore can be taught to tell the time – the idea two Lithuanian entrepreneurs, 27-year-old Laurynas Mazeliauskas and 22-year-old Žilvinas Kuprėnas, have proven business-viable. The founders of Crop Shop who are making original clocks from old vinyl records say that they are going to conquer the world as their ideas are becoming more and more attractive to customers not only in Lithuania but in foreign countries as well.

"I have never regretted that we started this business. It was a little stressful when the business was only gaining momentum and we received an order from one company which asked for more clocks than we had ever produced. We had to work at night; however, now such an order would not frighten us. We are producing more and more clocks every day and the sales have been growing on an even keel ever since we established the company," said Kuprėnas.

Business partner instead of job offer

Kuprėnas, who was born in Kaunas, met his future business partner in a job selection camp.

"Laurynas and I met under quite interesting circumstances. We were invited to a job interview at a selection camp. We spent a weekend together and while neither I nor Laurynas got the job, we started establishing relations little by little. He told me about his idea to make clocks from vinyl records. From the very beginning, we felt that we can do something together because we shared similar views on business and work," remembers Kuprėnas.

"The very first clock that I produced was for myself, I made a model. At that date, I was into Daft Punk and I though that it would be great to have such a clock on the wall. We made it, posted a photo on Facebook and received a lot of positive feedbacks. We decided that we have to try to work on this," said Kuprėnas speaking about Crop Shop's first steps.

How can the Beatles help business?

According to Kuprėnas, the business partners did not have to make significant investments in Crop Shop. At the very beginning, he and his partner had to put a little over several thousand litas into the venture.

"This was not a big investment. We decided that, if we did not succeed, it would be fun at least and we would learn something new. We made several clocks, one of them featuring the members of the legendary band the Beatles," revealed Kuprėnas.

At the beginning, the young businessmen were making serial clock dials, but one or several months later, a friend Kuprėnas asked whether Chop Shop could make a clock on his own design. This was the moment that the young entrepreneurs realized that making clock dials by individual requests had enormous potential, since they could serve as great personal gifts.

At first the two partners were making clocks from vinyl records found in the basements and atticks of their own houses. Later, they started buying vinyl records for symbolic prices and now people often come to them and offer to give vinyls away. "Now we have a special offer – people get a discount, if they give us vinyl records," said Kuprėnas.

Crop Shop has been in business for a little over six months; however, it has already drew attention from buyers abroad.

"We are currently working in the Lithuanian market, we do not have any promotion abroad; however, last month's foreign sales overtook sales in Lithuania. But we do want to expand beyond the borders of Lithuania. As a result, our online shop will be launched soon and we plan to introduce a unique function within a period of half a year. The function will allow people to make their own designs for a clock dial," said Kuprėnas.

Crop Shop has already produced more than thousand clocks, a third of them were individual orders.

At the moment, it is only Mazeliauskas and Kuprėnas who are working in Crop Shop; however, they do not rule out the possibility of hiring more people to work in their company in the future.

Crop Shop currently cooperates with a company which provides facilities needed cut vinyls; however, the young businessmen are planning to eventually buy the necessary facilities. "If we are planning to sell our products in the international market, we will not make it by buying the necessary services from the outside. And we will definitely conquer the world," Kuprėnas smiled confidently.

However, Crop Shop has not become the only source of income for the two. Kuprėnas works as marketing specialist in several companies, while Mazeliauskas has another business.

"But I consider this business as one of my main activities. It is possible to make one's living from this business while staying only in the Lithuanian market. We like to come together after work and finish all clock orders. This is a form of meditation, an activity full of good emotions. Especially since our customers are very cheerful, positive people," said Kuprėnas.

According to Kuprėnas, business conditions in Lithuania are very favourable. All one needs are good ideas and dedication.