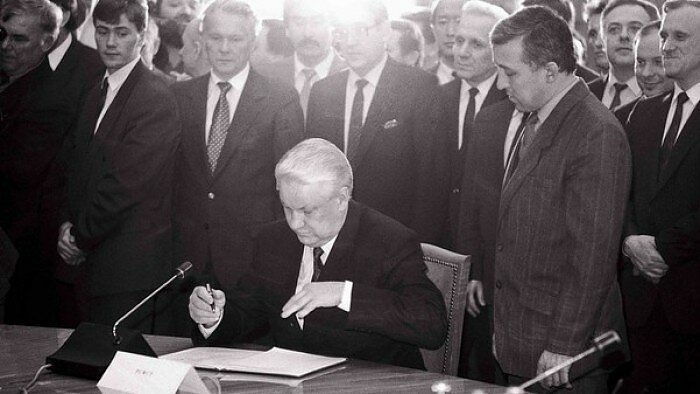 A Grand Cross of the Order of the Cross of Vytis was presented to the President's widow Naina Yeltsina, at a solemn ceremony.

Yeltsin fought for the changes in Soviet Union, supported democracy and independence of the Baltic States.

Under his leadership, the Russian Federation and the Republic of Lithuania signed the Treaty on the Foundations of Inter-State Relations, in 1991, which recognized Lithuania as a sovereign state.

Important treaties regarding the state border and the withdrawal of Soviet troops were also signed when Yeltsin held the presidency.

The Grand Cross of the Order of the Cross of Vytis is a state award granted to the heads of state and citizens for outstanding merits to Lithuania.

Relations that we will decide to maintain are to remain in the future. We have to understand what we want, and that the future rests on us. I think that at large Russians are benevolent; they come to Lithuania as tourists. As I can see Lithuanians attitude is also positive. So the future is in our hands and it will be bright, for sure

(About B. Yeltsin’s reaction to January 13, 1991 events) When she with her husband walked out of the theater, he received a call explaining what is happening in Lithuania. He immediately called Gorbachev asking why tanks have been deployed in Vilnius. When there was no reaction, he took the plain, flew to Tallinn and, as you know, United Nations received a document, which highlighted the aggression of January 13, 1991 in Vilnius.