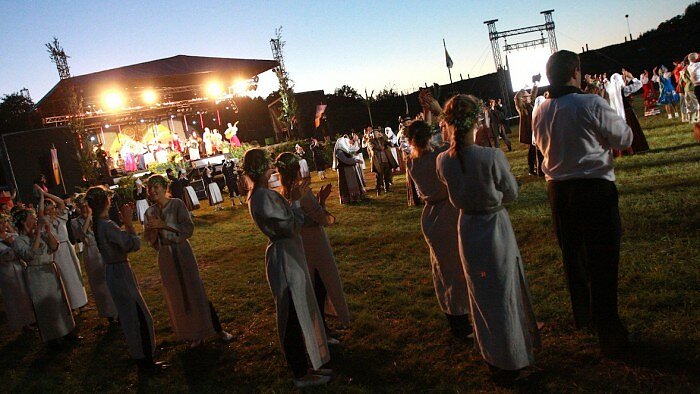 Repertoire of the Festival was focused on Lithuanian and other Baltic countries folk songs and dances. The festival consisted of three days and three parts: Day of Song, Day of Dance and the Evening of Ensembles. Performances took place at various venues of Vilnius, between 6th and 8th July.

The Festival is aimed at promoting pride of national culture, customs and traditions among the young generation and providing opportunities of participation in the creation of national culture. The Schoolchildren Songs Festivals in Lithuania have been held since the interwar period.

Thousands of schoolchildren were accommodated for the stay during the Festival in various school buildings. More security forces were attracted in the capital and schedules of the city transport were adjusted so that children could come back from concerts safely. Major museums of the Vilnius City provided free entrance for the participants.

The Festival was complemented by many other culture events held to celebrate the Statehood Day. It is an annual public holiday in Lithuania celebrated on 6 July to commemorate the coronation in 1253 of Mindaugas as the first and only King of Lithuania.

Although the exact place of coronation is questionable, it is not difficult to imagine, that the ceremony was accompanied by songs. Songs sounded in various periods of our country’s and its people life.

4. Soundbite (Lithuanian), participant of the Festival:

It is not my first time. I can’t tell you how many times I have been here. Could be eleven, in all. The biggest pleasure is to hear when all applaud you and support you.

5. Soundbite (Lithuanian), participant of the Festival:

Traditions are reborn here. So many various dances and songs... And the languages are different.

6. Dances in the streets