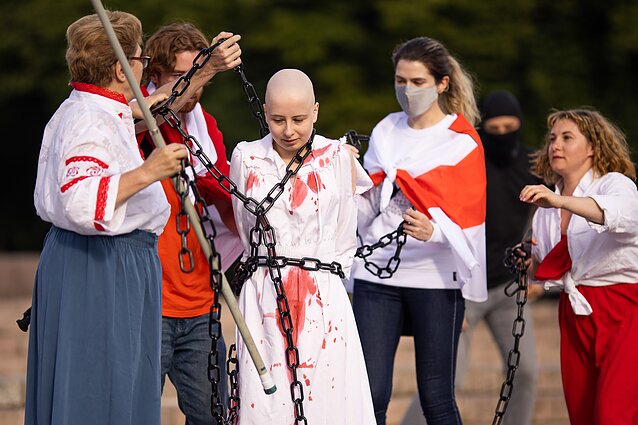 Several hundred representatives of the Belarusian opposition gathered in the Cathedral Square in central Vilnius on Tuesday to mark the second anniversary of the presidential election in their home country that sparked civic activism in Belarus.

Using blocks, participants formed a Belarusian national flag banned by the Alexander Lukashenko regime, held a church service to honour the regime’s victims and also volunteers who died in Ukraine, and chanted “No to War!”

People held white and red flags and wore clothes in these colours.

Belarusian opposition leader Svetlana Tikhanovskaya said that two years ago the Belarusians were full of hope and could not imagine the price they would have to pay for their choice.

“With no doubt, we all have a relative who has been arrested, beaten or is now in prison, just like my husband,” Tikhanovskaya said. 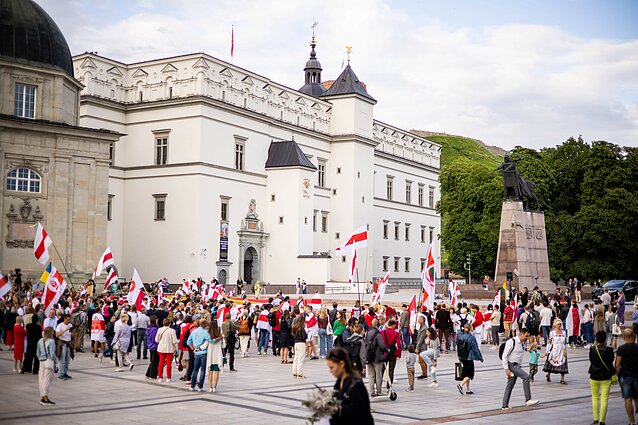 Two years ago, she said, the Belarusians could not have known “how much our police and courts had degraded”, and could not have imagined that “Russia would declare war on Ukraine, and Lukashenko would provide Belarusian territory as a training field, endangering the country’s sovereignty”.

The opposition leader said that August 9 was also a day of dignity for the Belarusians as a sense of national pride was awakened in people.

On Tuesday, Tikhanovskaya also announced the decision to establish a transitional Belarusian government, with Pavel Latushka, Alexander Azarov, Valery Kovalevsky and Valery Sakhashchik among its members.

On Tuesday, the Lithuanian tricolour was also unfurled alongside the Belarusian national flag in Cathedral Square. 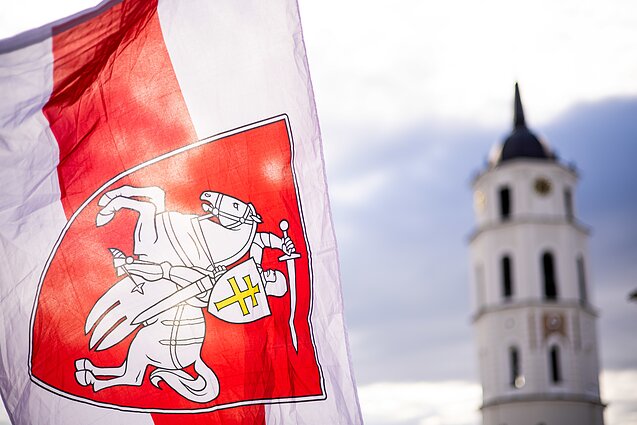 The Belarusians attending the rally said they had been forced to flee their country.

“Today is August 9, two years after the election, after the tragedy in Belarus, so to speak. You can see how many of us, Belarusians, are here, and we are here for a reason. We have no choice. We are forced to be here. Otherwise we would be in Okrestino [a detention centre in Minsk] or in another prison. Here we can breathe freely and express our position,” actor Sergey Tolstikov, who has been living in Lithuania since January, told BNS.

He said he came to Vilnius to shoot a film entitled Okrestino and never went back home.

“I did my part in the movie, and then videos and reports about the film emerged, and I found out from good people that it was better for me not to go back to Belarus because searches had already been carried out at home and summons to the Interrogation Committee had been received,” he said.

Olga Titova, a filmmaker and artist, came to Vilnius to live with her sister in February when Russia started its war in Ukraine.

“It was impossible to stay there when such terrible things are happening. We do not accept bombs flying from our territory into Ukraine,” she said.

The woman told BNS that she feared reprisals. 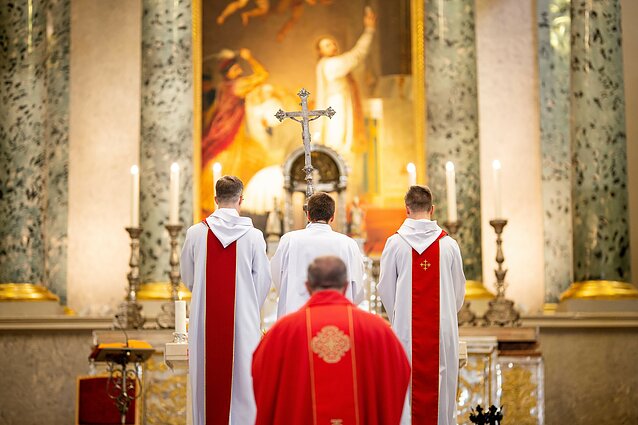 “What happens there is that they say: we go, we talk, and the person never comes back. It was like that in February, in April – all the time. It’s scary,” Titova said.

Her sister, Yulia Titova, has been living in Lithuania permanently for four years and lectures at the European Humanities University.

“We disagree with our state pursuing a criminal policy. They are murderers, they are illegitimate. We support Svetlana Tikhanovskaya, she won the election,” Titova told BNS.

Asked what solution she sees for the Belarusian people, Titova said: “We have one way out: to take up arms. Many people here think so, otherwise nothing will happen. We have not been able to shake off the Russian Empire’s yoke for the past 200-300 years.”

Also attending the Vilnius rally, Katsiaryna Snytsina, a basketball player and former captain of the Belarusian national team, said she left Belarus in August, 2020 to have the freedom of expressing her position.

“I left the team because I decided that I would not represent the regime on the international stage. I realized that if I returned to the country, I would most likely be detained. Now I live in Europe. I spend the summer in Lithuania where I work with my compatriots on changes in my country,” the athlete told BNS. 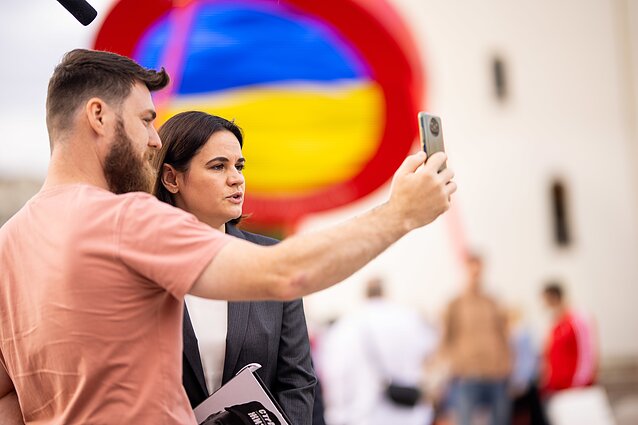 She says it is very hard to work for changes in the country when all those who want change have been forced to leave.

“That’s why the people who have left and who continue their activities abroad have a very big responsibility,” Snytsina said.

Belarus held a presidential election on August 9, 2020, and it was followed by mass protests after Lukashenko, the country’s authoritarian president since 1994, was declared the winner again.

The country’s opposition and Western countries refuse to recognise the election as free and fair.

The Belarusian government cracked down on opposition demonstrations as over 35,000 people were detained by the police in the aftermath, and thousands of protesters say they were subjected to violence by members of force structures. Key opposition figures have since been imprisoned or forced to leave the country, independent media outlets have been searched and their journalists have been arrested.

Having challenged Lukashenko in the presidential election, Tikhanovskaya now continues her political activity from Vilnius.

The human rights group Viasna states on its website that there are still 1,200 political prisoners in Belarus. 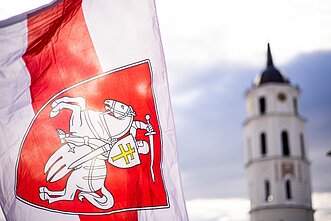 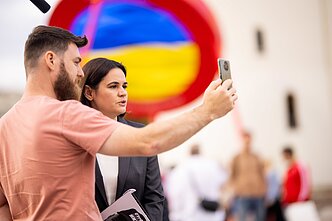 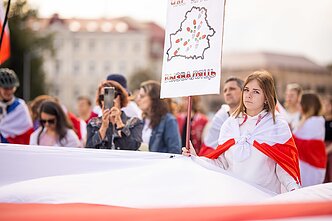 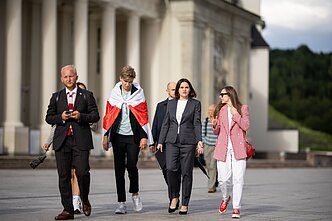 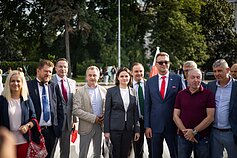 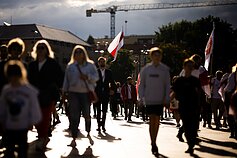 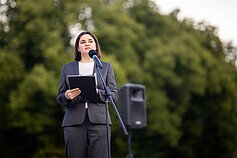