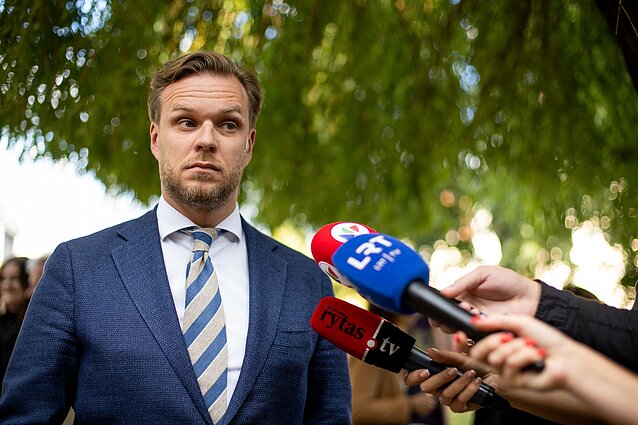 Is there another ‘Kaliningrad crisis’ brewing? Lithuania resumed, somewhat reluctantly, the transit of sanctioned Russian goods to and from Russia's exclave of Kaliningrad. Last week, however, Russia’s envoy delivered a note, protesting that the last bank still processing payments for the transit will stop doing it in a month.

“Not our problem,” was essentially Lithuanian officials’ response. We cannot force private banks to do things, they said, and if Russians need to pay for the services of Lithuanian Railways, it’s up to them to find a way. According to the Lithuanian foreign minister, Moscow is just fanning a crisis where there is none.

However, not everyone is so nonchalant. The opposition says the government is walking into another crisis and should take charge of the situation.

Meanwhile, authorities in Kaliningrad seem to be cracking down on Lithuanian cultural associations. A 10-year-old children’s choir was banned from the Russian Folk Festival, while an association of Lithuanian language teachers got closed down altogether. While the local authorities were never too well-disposed towards manifestations of Lithuanian culture, pressures mounted following this summer’s tensions over transit.

Lithuania’s foreign minister was quick to congratulate US House of Representative Speaker Nancy Pelosi after landing in Taipei. And, according to EUobserver, he was the only one in the European Union.

Pelosi’s controversial visit is in tune with Lithuania’s own recent policy of deepening ties with the island nation, against harsh reactions from Beijing. After this week, more may follow to walk through “the door” opened by Pelosi, Lithuania’s FM hopes.

Lithuania this week celebrated the centennial anniversary of starting diplomatic relations with the United States. “As long as the region remains as hot as it is, I think you can anticipate a very consistent American military presence here with other NATO allies,” US Ambassador Robert S Gilchrist said in an interview with LRT.

Lithuania confirmed its first case of monkeypox on Wednesday. The Health Ministry announced it was a man in his 40s who probably got the infection abroad. Two more cases were reported on Friday. Lithuania has ordered some 18,000 monkeypox vaccines, but the ministry said they would only be given to people after high-risk exposures and not be used for preventative vaccination.

The River Nevėžis spilled over its banks in Panevėžys after an old dam broke down. Water levels rose to a near-critical mark but did not flood any buildings as rescue services plugged the hole in time.

Built in the Soviet times to serve a screen factory – by now defunct – the dam has not been well maintained, and now local and national authorities are sparring over whose responsibility it was and who is going to pay for it.

STABBING IN THE UK

The country was shocked when a nine-year-old Lithuanian girl was stabbed to death in Lincolnshire, England. The suspect is also a Lithuanian. He has been arrested and is being tried at Lincoln Crown Court. “The whole of Great Britain is mourning, and the Lithuanian community in the UK is also shocked,” said LRT RADIO’s correspondent in the UK.

– Western-backed Ukraine should seek a ceasefire and negotiate a truce with Russia. This would not be an appeasement of Moscow, but a sensible move, since Kyiv’s negotiating position may be weaker in six months, says Charles A Kupchan, a professor at Georgetown University and a senior expert at the Council on Foreign Relations, in an interview with LRT.lt.

– Lithuania has eased the requirements for employers to hire foreign nationals. Asylum seekers and foreigners who have arrived in the country irregularly will now be able to become employed or self-employed 12 months after their registration with the Lithuanian Migration Department.

– The decision on whether Kaunas modernist architecture will be inscribed on UNESCO’s World Heritage list, which was expected this summer, has not been made and it is not clear when it will be. Russia’s chairmanship of the UNESCO World Heritage Committee is another thorny issue.

– In Vilnius, a giant image of a Ukrainian woman in a national costume has appeared on the Moscow House facade. This is a joint response by Lithuanian, Ukrainian, and Estonian artists to Russia’s war in Ukraine. The project “Do Peremogi” (“Until Victory”) was conceived by Lithuanian artist Lina Šlipavičiūtė.

– Every year, the Lithuanian state sells hundreds of properties whose owners have passed away without any heirs. These include prime real estate in central Vilnius as well as low-value homes in the provinces. Part of the reason is Lithuania’s deteriorating demographic situation, says a researcher.

– While basketball is generally accepted to be the national sport of Lithuania, the country should be celebrated for punching well above its weight in another sport – discus throw.

– Be advised: part of the motorway from Vilnius to Kaunas will be shut at nights until Saturday.

– With skyrocketing electricity and gas prices, businesses in Lithuania are looking for ways to save money. Business associations suggest that big firms could have their employees work on weekends, when electricity is cheaper. Meanwhile, trade unions say now is the time to talk about a four-day working week.

– A proposal to ban Lithuanians from doing any business with Russia may bring unintended secondary effects, warn industry reps. Few firms trade with Russia, they say, but many need to transit the country to bring their goods to Asia.