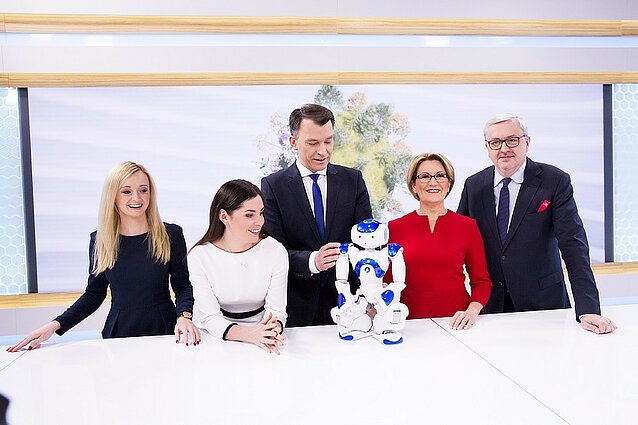 On 16th February, when Lithuania celebrated the 99th anniversary   of the restored independent state, Lithuanian national broadcaster greeted its viewers from most advanced news studio in the Baltics. From 9.00 a.m., LRT Television broadcast its morning infotainment programme “Good Morning, Lithuania”.

The newly equipped studio was launched on 15th February, on the eve of state festivities. During the event hosted by robot NAO the new graphic images were presented for the LRT Television’s major information programmes: “Good Morning, Lithuania”, “Good Afternoon, Lithuania”, “Today”, “Panorama” and “7 Days”. The cost for reverse of the news studio, along with new equipment, visualization, aeration systems, etc. amounted to about 1 million euro.

‘Fast development of TV technologies forces our hand to adopt a whole new level of innovations or else we would face the danger of becoming a yesterday’s television. I think, with this new studio we move with the time or even are one step ahead, but it doesn’t mean we can rest on laurels. New technologies emerge faster than we are able to catch on with them’, said Audrius Siaurusevičius, LRT Director General, during the presser of opening the studio. ‘Since we have launched broadcasting our content on high definition LRT HD channel, we have to invest in tool set, stage area virtual sets, etc. Otherwise we would have an incongruity here. I hope our viewers who can watch the HD transmissions will appreciate the changes.’

‘I do believe that modern technologies will make the LRT TV news even more visually attractive. From our news studio, like before its modernization, we’ll be airing all our TV news programmes – about 7 hours daily, on workdays’, pointed out Audrius Matonis, Head of LRT TV News.

Recent opinion poll showed that over 8 from 10 grown-up Lithuanians (83%) gave positive evaluation of the LRT activity as a public broadcaster. Of the seven media groups in the poll conducted by “Baltijos Tyrimai”, LRT came out the leader according to such criteria as fostering of culture, audience education, reliability, objectivity and promptness. However, speaking of modern image, LRT group had to acknowledge the advantage of the other two media groups, in the above poll.

More about the new studio, its possibilities, and photo gallery at:

Interesting facts about technical possibilities of the studio:

Studio type: hybrid. What does it mean? Along with the actual studio set and screens we use the augmented reality technology, which enables creating 3D graphic, adding virtual objects and inserting them in the studio set.

For example, in this studio you can draw a starlit sky or place a car in the centre.

Studio is equipped with most advanced technologies. It has two 6 and 3 metre long screens with 2.5 mm pitch.