Symbol of Vilnius under threat 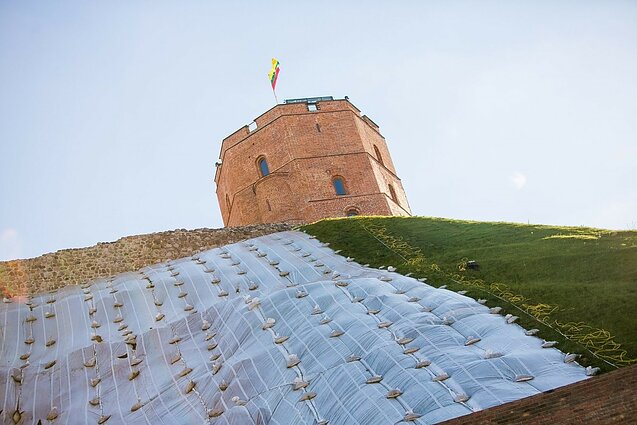 The historical Gediminas Castle Hill in Lithuanian capital Vilnius is rapidly disintegrating, and there will be no traditional on this New Year’s Eve around central Gediminas Castle. Parliamentary Committee of Culture held a special meeting yesterday to find solution for the problem.

Ramūnas Karbauskis, leader of the ruling Peasants and Greens party, which won the 2016 elections in October said that ‘one of the first works of the new government should be forming a working group that will decide who is to be responsible for repairing the Hill.’

The government has yet to decide, which institution should solve the issue of a worsening hill situation despite many warnings of experts regarding negative effects of the increased transportation around the Hill, funicular, noisy concerts around and even fireworks, as Gediminas Hill is the main flag point during various celebrations.

The Hill was particularly damaged when the construction of the historical Palace of the Grand Dukes of Lithuania nearby started and when a company that no longer exists tried to reinforce the Hill with concrete stripes called grillages, but the work was done poorly.

Now these grillages are under a massive pressure and the risk is it could lead to a serious disintegration of the Hill. There already have been several landslips on the Hill’s slope.

‘Grillage will be strengthened, because it is a necessity now’, promised Jonas Satkūnas, Head of the Lithuanian Geological Survey.

‘I really hope it will prevent the worst, which is disintegrating those stripes from the reinforced concrete’, said Birutė Kulnytė, Director of the Lithuanian National Museum located just at the base of the Hill.
The tower of the on Gediminas hill is the iconic symbol of Lithuanian capital Vilnius and very popular among the tourists. The castle built at the end of the XIII century was destroyed during the wars with Russia in XVII century, and it was restored after the WW2, and again after Lithuania regained independence.

RAMŪNAS KARBAUSKIS, Leader of the ruling Peasants and Greens party:

In the nearest future, after the new government ministers will swear, one of the first tasks is to be forming of a working group that will decide on who is responsible for repairs and fixing co-ordination between the institutions. We will not look for the guilty right now, as it takes a lot of time, we will look for the ways of solving the problem. Of course, later we will request the Audit Committee to conduct investigation.

JONAS SATKŪNAS, Head of the Lithuanian Geological Survey under the Ministry of Environment:

Grillage will be strengthened, because it is a necessity now. We’ll drill quite a deep borehole to do that and pile it. We’ll supervise the process and see that the work is done properly. (Reporter asks what the grillage is) Grillages are stripes of the reinforced concrete. You can see how it looks here. It is reinforced with piles, but you can see how soil presses these grillages here…