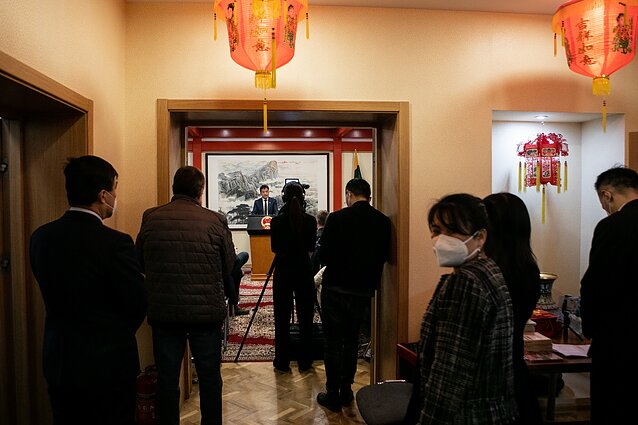 Lithuania’s rift with China went further on Sunday when Beijing downgraded its diplomatic ties with Vilnius. A strange (and rare) press conference at the Chinese embassy followed, where reporters were barred from recording and had to endure a tirade about Lithuania’s alleged wrongdoings. Crucially, however, Beijing’s rep indicated that all China is asking for is to rename the “Taiwanese” de facto embassy to bear the name of Taipei instead. No new measures against Vilnius were announced.

Meanwhile, a delegation of Baltic MPs are set to visit Taiwan, where they will also meet with President Tsai Ing-wen. And as the three countries build ties with Taipei, can Beijing do much to interfere? For Lithuania, the decrease in business with China will hit food exports the most, according to a trade association.

ANATOMY OF A RIOT

From Trumpism, to SS uniforms, pandemic populism, and anger at the Covid restrictions. The LRT Investigation Team has published their long-anticipated investigation into the main actors and organisations of the August 10 anti-vaxx rally that turned violent. It was the first riot the country had seen in more than a decade. Find all the details here – part one, and part two.

Lithuania is (again) mulling introducing mandatory vaccination for some workers. If the government proceeds, the measure will likely cover three sectors – social services, education, and healthcare. The pandemic situation in the country has so far improved, showing stabilising trends for the third week in a row. A hospital in Lithuania is also due to trial a Covid drug. Meanwhile, an anti-vaccination protest in Vilnius attracted over 1,000 people on Sunday.

The number of people crossing irregularly from Belarus has decreased, with up to 2,000 troops continuing to be deployed at the border to assist the guards. NATO Secretary General Jens Stoltenberg and European Commission President Ursula von der Leyen are to come to Lithuania this weekend. As before, find all the latest news here.

The wages showed an 11-percent increase this year. Next year, those earning the minimum will see their income rise from 400 to 466 euros. But more taxes are coming in the form of the pollution tax for cars, while the retirement age is also set to be raised. The property market boom is also a cause for concern, the central bank says.

It snowed for the first time this season. In case you missed it, we got you covered – find the pictures here. For some of the asylum seekers in the country, it was also their very first steps in snow.

– The Lithuanian population is contracting at a record rate. The Baltic country is one of four fastest ageing societies in Europe, while its 2020 birth rate hit a 20-year low.

– Poland’s Defence Ministry has published a video allegedly showing a visibly intoxicated Belarusian officer asking his Polish counterparts for cigarettes. “I give you Belarusian cigarettes Pall Mall and you give me Polish Pall Mall cigarettes,” the man says to the guards on the other side of the razor wire fence.

– A group of Lithuanian MPs have called for the country to boycott the upcoming winter Olympic Games in Beijing. The National Olympic Committee says, however, it would be unfair to athletes.

– Although Alexander Lukashenko has threatened to cut off gas supplies for the first time, Lithuania and Ukraine are no stranger to this form of blackmail. Only now, Russia’s dangling of its gas supply has also reached western Europe. Aliide Naylor, author of The Shadow in the East: Vladimir Putin and the New Baltic Front, examines the recent developments.

– Around 170 Afghan interpreters and their family members who have been evacuated to Lithuania live in a vocational school dormitory in the western Lithuanian town Raseiniai. “If the state cannot take care of us, they should let us go to other countries.”

– Juozas Jakavonis, nicknamed Tigras, a member of the anti-Soviet resistance and one of the winners of the Freedom Prize, passed away at the age of 96, his daughter Angelė Jakavonytė confirmed on Tuesday.

– Lithuania's Social Security and Labour Ministry has invited organisations in the country to illuminate their buildings in orange and people to wear orange in order to bring attention to violence against women.

– Rural life is a common subject in Lithuanian photography. The images of Rimaldas Vikšraitis, however, are exceptional. Have a look.

– And what are Lithuania’s cities promising for the festive season this year?