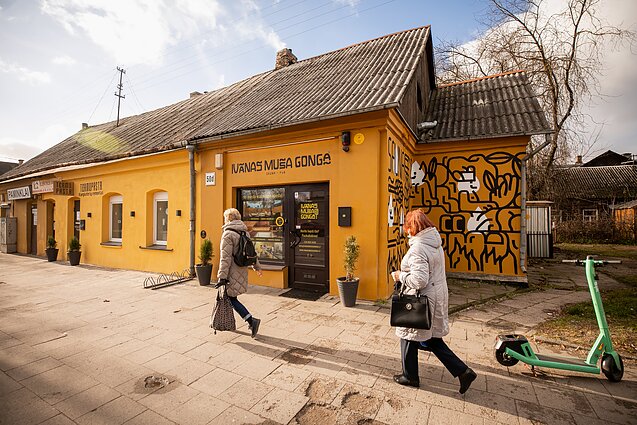 One evening, after a day of arduous work, two friends went to a sauna to relax – and then decided to buy it.

Arnas Repečka is not new to business. He has owned a firm in Tenerife, while also owning a café in Vilnius that was ran by a partner. The business in Tenerife did not quite pan out, so Arnas sold it and returned to Vilnius.

“When I came back, I realised that she [the partner] was doing very well, so I decided that it would be unfair to take the job away from her,” Arnas said. “Then, I started searching for myself. I started another import business, which was not going so well.”

Soon, the man decided to close this business, as well.

In the meantime, his friend Andrius Jurkšaitis was starting a new project. He had bought an old apartment on Kalvarijų Street in Vilnius and decided to renovate it. 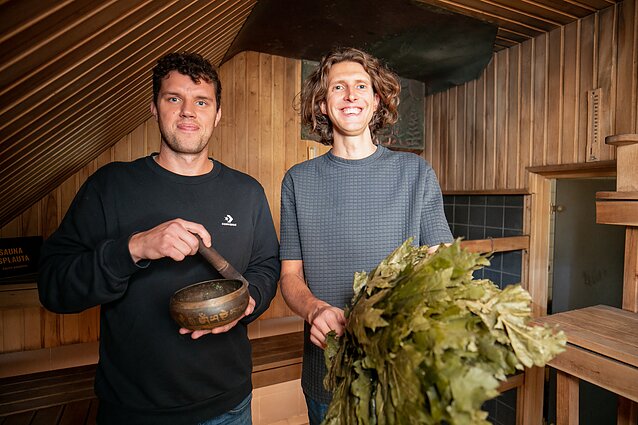 “Come and help. You’re not doing anything anyway,” he invited Arnas.

One evening after work, the sweaty friends decided to wash up in a nearby sauna. According to Andrius, going to the sauna is his habit. When he was a child, his father used to take him to the sauna all the time.

“I am used to going to the sauna every week. I still do it,” he said.

The sauna on Kalvarijų Street with a witty name – Ivan Beats the Gong (Ivanas Muša Gongą) – opened three years ago. Arnas and Andrius were visiting it two times a week and quickly became friends with its owner Kazimieras. 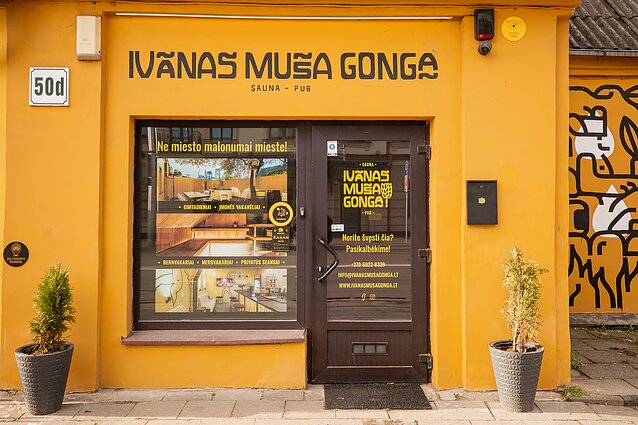 After some time, the friends noticed that Kazimieras stopped paying attention to the sauna, because he started a new business. But Arnas and Andrius had a vision for the place and decided to make an offer. Kazimieras agreed to sell.

The two friends became sauna owners on September 30 last year. They decided to rebrand the place and open it again on November 3.

They worked day and night and hired extra help to meet the deadline.

“We worked like a Swiss clock. We opened on November 3 and closed on November 7 because of the coronavirus lockdown,” Arnas said. 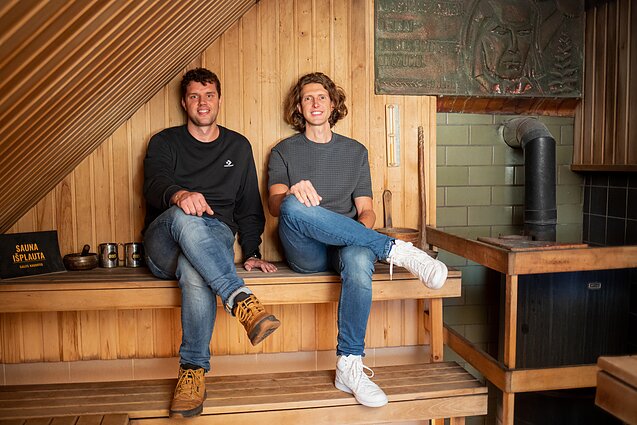 During the lockdown, they used the time to come up with a number of new ideas to implement at the sauna.

Once they reopened after the quarantine, a new routine was established. On Mondays, the hosts enjoy the sauna themselves, while Tuesdays are reserved for men and Wednesday evenings for women.

On Thursdays, the place hosts men's evenings with a sauna master, while weekends are dedicated to private parties. The sauna can accommodate up to 15 people at once.

The owners do not like their place to be called a public sauna and prefer to be referred to as a social club. Arnas and Andrius personally know most of their customers and are open to their suggestions. 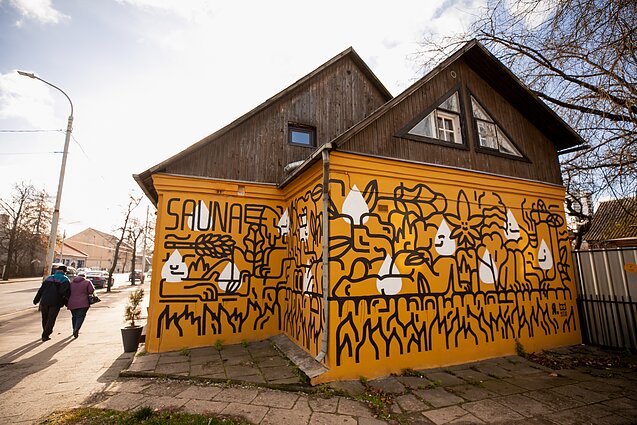 At Ivan Beats the Gong, visitors can try a variety of aromatic and health-boosting rituals, a bath broom massage, or a hot tub.

Owners joke that the atmosphere here is as tranquil as in the countryside, but the location right behind Vilnius skyscrapers offers a view like in Malaysia.

“We offer countryside pleasures in the city,” Andrius said. 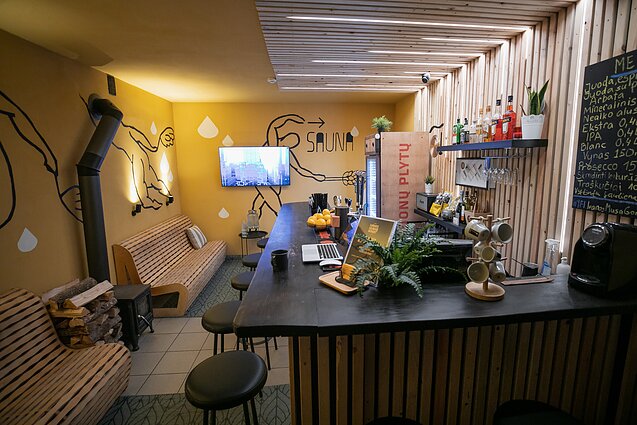 According to the friends, they also aim to challenge misconceptions that people often have about sauna procedures.

“Many people think that there should be a hundred degrees in a sauna so that when you come in, your nose and skin are burning. You sit there and suffer, and you only recover after the sauna,” Andrius said.

“We have turned this stereotype on its head and showed that 50-60 degrees and good steam are enough for a nice sauna,” he added. 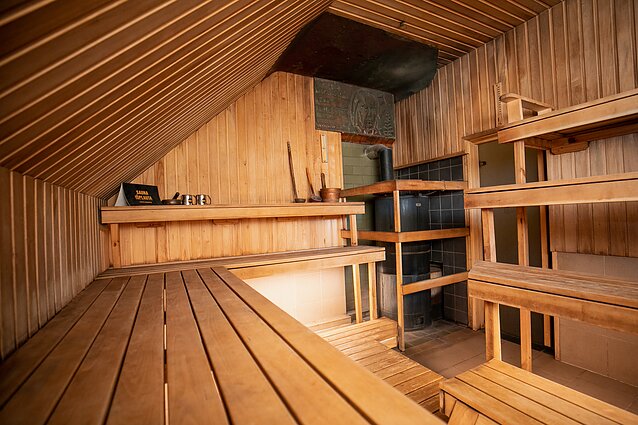 According to the owners, Ivan Beats the Gong is almost always full, as the sauna culture is becoming more popular in Vilnius. But they agree that “it’s not the kind of business that could build you a house”. Both men have other jobs, so the sauna is like their hobby, they say.

Asked about the funny name, Arnas and Andrius say that there has never been any Ivan.

“The founder of this place was a very creative person. […] It is possible that he came up with the name by accident. We liked it very much, so we trademarked it,” Arnas said. 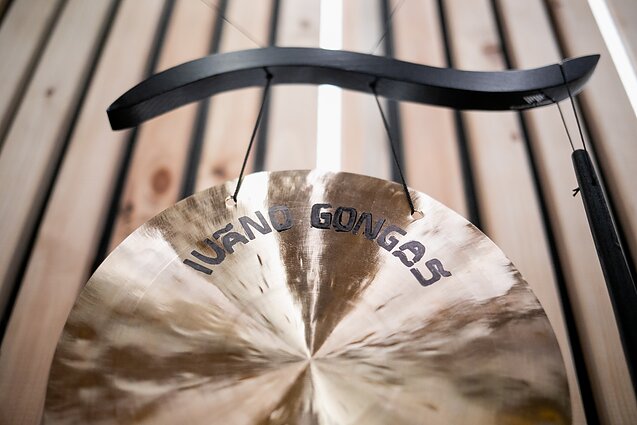 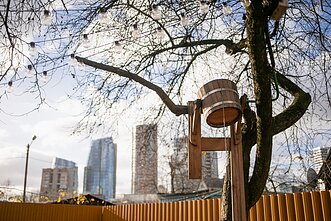 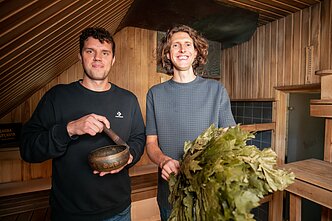 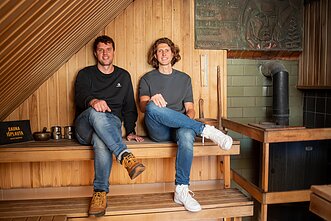 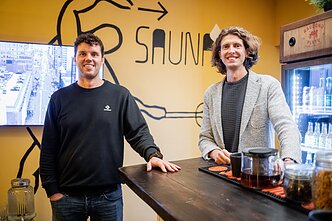 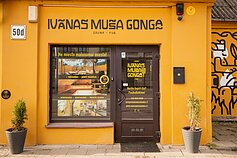 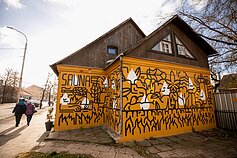 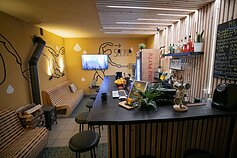