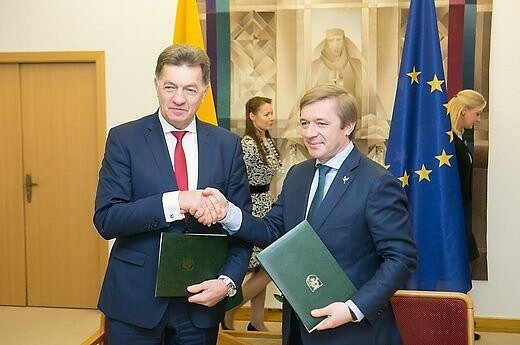 After years on the margins of Lithuanian politics, having only one member in the old Parliament, Peasants and Greens won a decisive victory with 54 out of 141 mandates and today signed a coalition deal with former governmental Social Democratic party, which lost the elections, but agreed to join the coalition with their 17 mandates leaving in opposition Conservatives and Liberals, who put up a solid performance in the elections.

Social Democrats are expected to control the justice, economy and foreign ministry in the new cabinet, while the rest of positions, including that of Prime Minister and Parliament Speaker are retained by the Peasants and Greens. A current Foreign Minister Linas Linkevičius will probably hang onto his office.

Peasants and Greens promised to change a controversial new Labour Code that makes it easier to hire and fire employees; also impose a state monopoly on alcohol sales, cut bureaucracy in order to boost economic growth and to halt mass emigration.

‘The recent growth of economy should be felt by the majority of people, they should feel that they live in a growing economy, so that they would feel better in the country, so that they would not look abroad seeking foreign labour markets. This is one of our main priorities. The other is to try to return majority of people who emigrated, or were forced to emigrate seeking for a better life,’ said Saulius Skvernelis who is going to be a new Prime Minister.

Peasants and Greens owe their success to the stellar popularity of Saulius Skvernelis, a corruption-fighting 46-year-old former national police chief who led party’s electoral list and now is a candidate for the position of Prime Minister. His squeaky-clean image turned him into hottest political commodity virtually overnight.

He promised to continue the pledge to reach 2 percent of GDP spending for defence and stressed the importance of this issue in order to counter the scepticism of the new US President Donald Trump who doubts if all NATO allies do contribute their share.

‘We will focus attention on our security and we do hope it will have a positive effect on our relations with the United States,’ said Skvernelis.

We will continue projects that are related to reforms in the energy sector. You probably know about international projects such as gas links integrated with Eastern and Central Europe gas links, also synchronizing of electricity infrastructure (with Western Europe), to study and to implement this project.

SAULIUS SKVERNELIS, a candidate for the position of new Prime Minister:

SAULIUS SKVERNELIS, a candidate for the position of new Prime Minister: