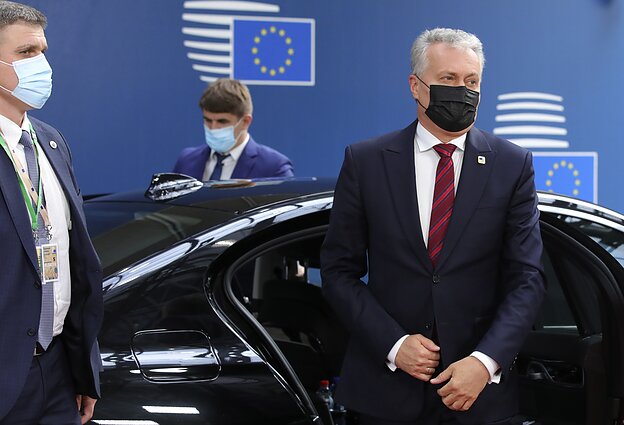 Lithuania will seek joint declaration of European leaders over the irregular migration crisis on the border with Belarus, Lithuanian President Gitanas Nausėda says.

“We want a very clear text on the migration issue, for the problem to be clearly identified, that it's not just plain migration, peaceful humanitarian migration, but it’s a piece of leverage in the hands of a dictator who is using it for a hybrid attack against EU states,” Nauseda told reporters in Brussels ahead of the European Council meeting.

“If we make such a conclusion, it means that we need to get prepared accordingly and draft changes to EU law to adapt it to the existing reality,” he said.

Lithuania wants the EU to amend its migration and asylum policy and provide for the construction of a border fence, according to Nausėda.

Almost 4,200 irregular migrants have crossed into Lithuania from Belarus so far this year. A similar number of people have been turned away since August 2, when Lithuania introduced a policy of pushing migrants back to Belarus.

EU institutions believe migrant pushbacks violate the European Convention on Human Rights. Lithuania, however, insists it offers sufficient opportunities to ask for asylum at border checkpoints and its embassy in Minsk.