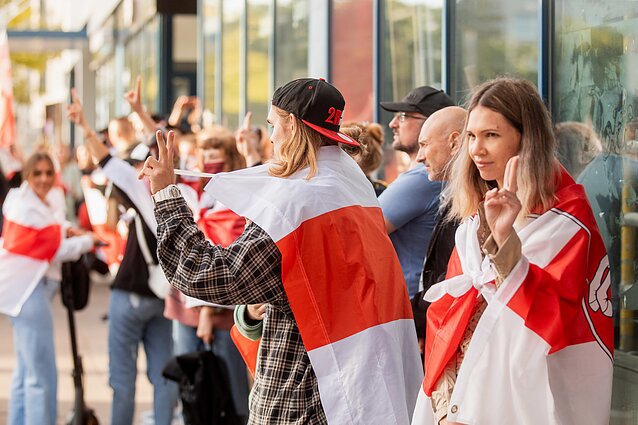 An opposition rally near the Belarusian embassy in Vilnius / D. Umbrasas/LRT

An international campaign #FreeViasna has been launched in Vilnius on Friday to express solidarity with imprisoned Belarusian human rights activists and to demand their release.

The Belarusian human rights centre Viasna is calling on the Western community to pool its effort to seek release of all political prisoners in Belarus.

“Everyone's input is very important and contributes to the release of our colleagues,” Natalia Satsunkevich, a Viasna representative, told a press conference at the Lithuanian parliament on Friday.

Seven Viasna leaders and members are still imprisoned a year after the first arrests in Belarus. They include Marfa Rabkova, the leader of the organisation's volunteer network, who was imprisoned exactly one year ago, as well as Valentin Stefanovich, a Viasna vice president, Leanid Sudalenka, head of Viasna's Gomel branch, Ales Bialiatski, a former vice president of the International Federation for Human Rights.

“They are accused of having funded protests as they used to help people to appeal Belarusian court rulings, provided legal consultations and documented cases of torture,” Satsunkevich said.

The organisation's leaders are also accused of failing to pay taxes on the services they provided, she added.

“Legally, these accusations are a weird invention, and, logically, it’s a classic example of politically-motivated persecution,” the human rights activist said. 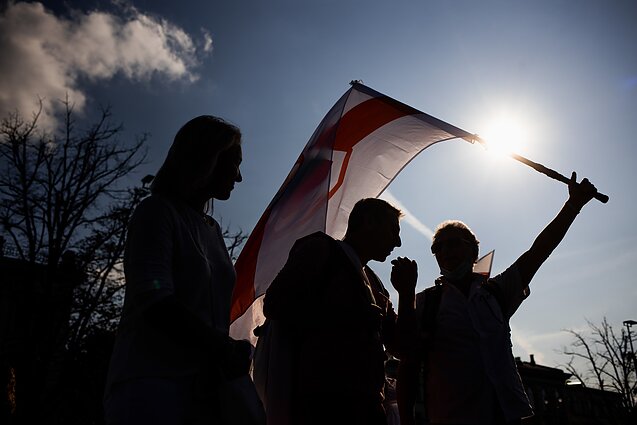 Stefanovich's wife Alina says it has become a usual thing in Belarus to press unclear and incomprehensible charges that are often changed. She said she had not seen her husband, who is now in a detention isolator, for two months and could only exchange letters.

Lithuanian MP Laima Andrikienė, member of the conservative Homeland Union–Lithuanian Christian Democrats party who assists Sudalenka, pointed out that the Viasna volunteer and his colleagues stand trial in secret during closed-door hearings.

Also attending the press conference, Viasna volunteer Pavel Sapelka said the general situation in Belarus was “tragic and horrible”. In his words, the Belarusian authorities responded with torture, attacks, violence and threats to the wish for democratic change, expressed by the people of Belarus following last year's presidential election.

“Afterwards the country started drifting into a gloomy Soviet reality. We now feel the same as our grandparents did when KGB machines would arrive and take people away. Now the only difference is in the car models and the fact that people who are put into jails are not shot dead but are kept in inhumane conditions and they get huge fines,” he said. 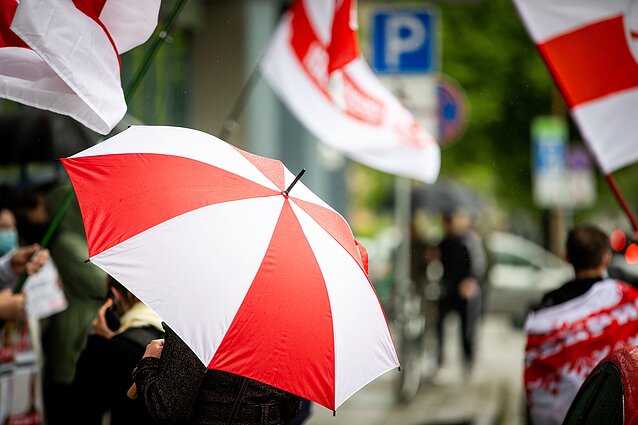 Red and white have become the symbol of the Belarusian opposition / E. Blaževič/LRT

The Lukashenko regime has not only banned all historic national Belarusian symbols but is also persecuting people wearing clothes in the symbolic colors of white and red, Sapelka said.

Over 4,600 have lodged complaints against government representatives for torture, but no cases have been heard so far.

“The Belarusian regime is very intentionally trying to make an impression on ordinary Belarusian citizens that they are on their own. Lawyers are losing licenses, human rights activists are being put in jail or forced to leave the country, and the same thing is happening with independent journalists,” Vytis Jurkonis of the Freedom House said. 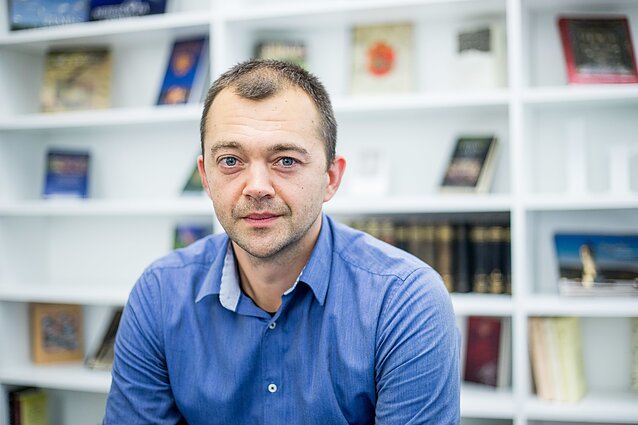 Jurkonis also expressed concern that the Belarusian authorities might start using political prisoners as bargaining chips to negotiate their release with the West in exchange for something beneficial in return.

“We should not get caught in this trap we did in 2015 when we pandered to the regime,” he said.

Mass protests erupted in Belarus following the August 9 presidential election last year when Alexander Lukashenko, who has ruled Belarus since 1994, declared himself the winner. A crackdown and repressions were launched against peaceful protesters and their trials still continue in Belarus.

Lithuania and other European countries consider the presidential election in Belarus rigged and do not recognise Lukashenko as the legitimate president. 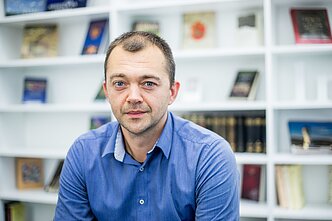 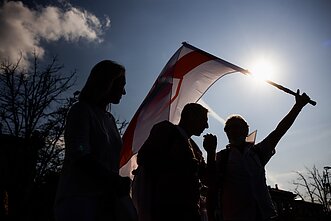 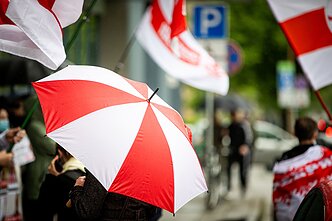 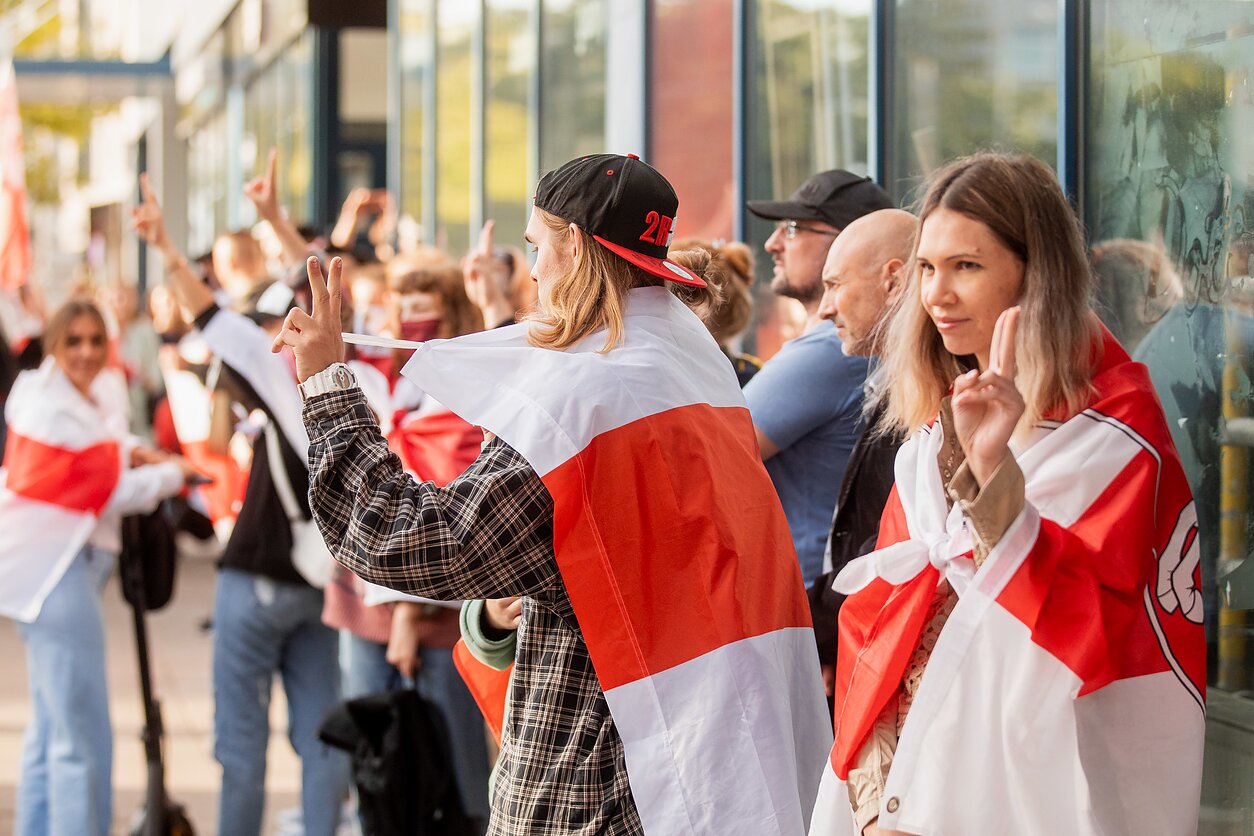 An opposition rally near the Belarusian embassy in Vilnius
1 / 4D. Umbrasas/LRT 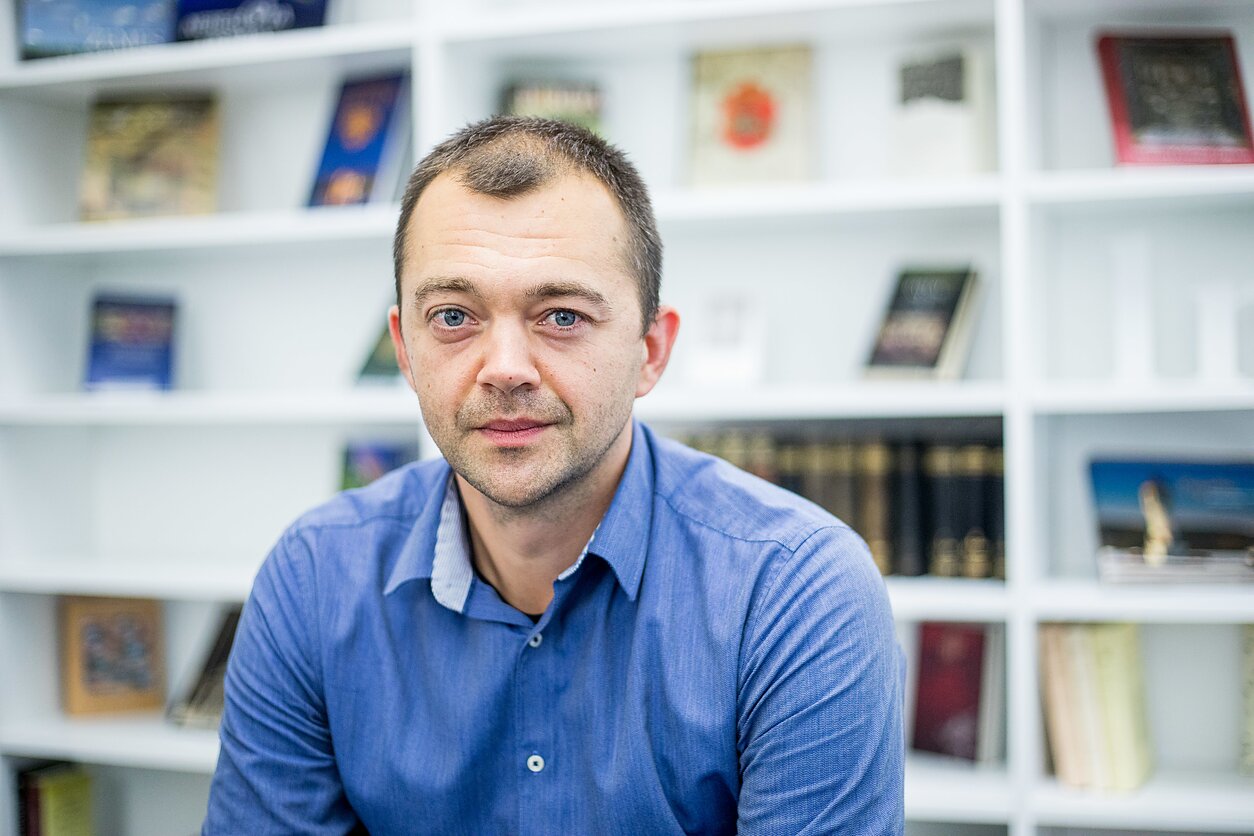 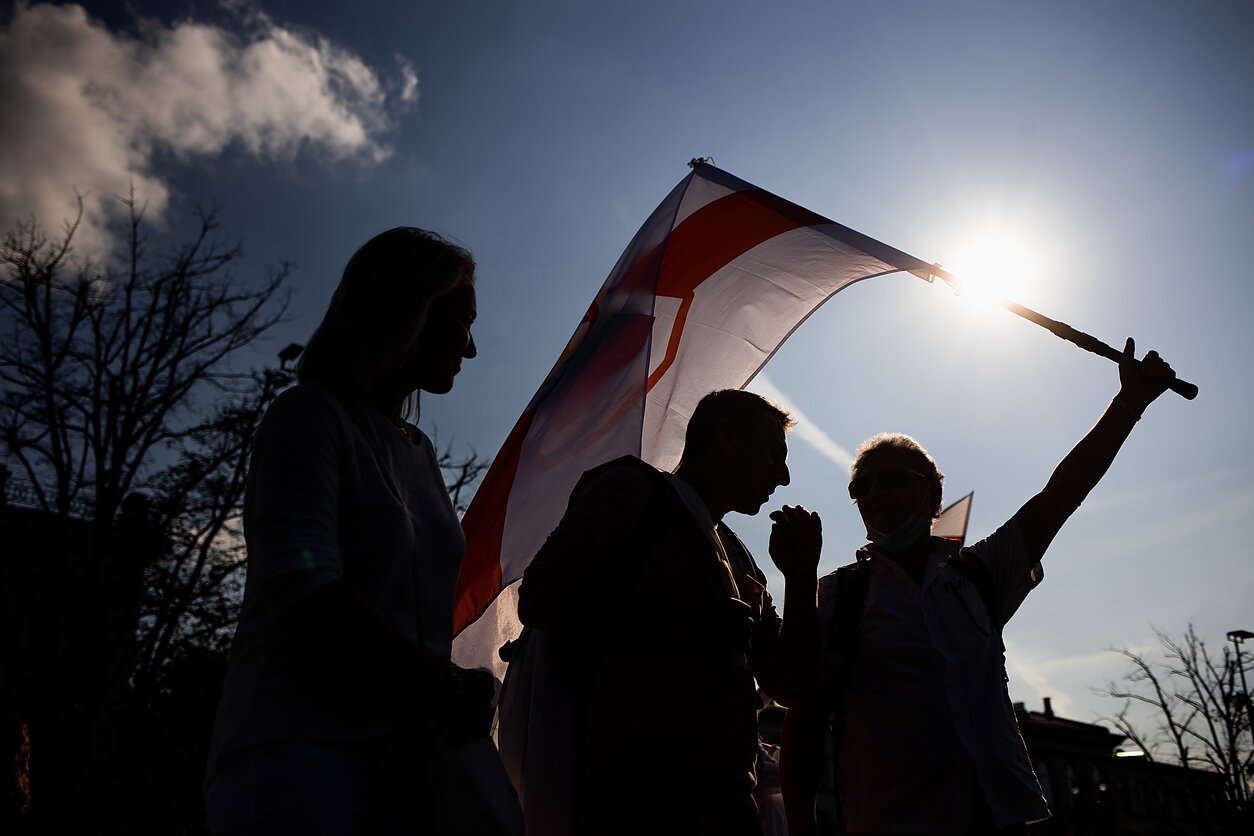 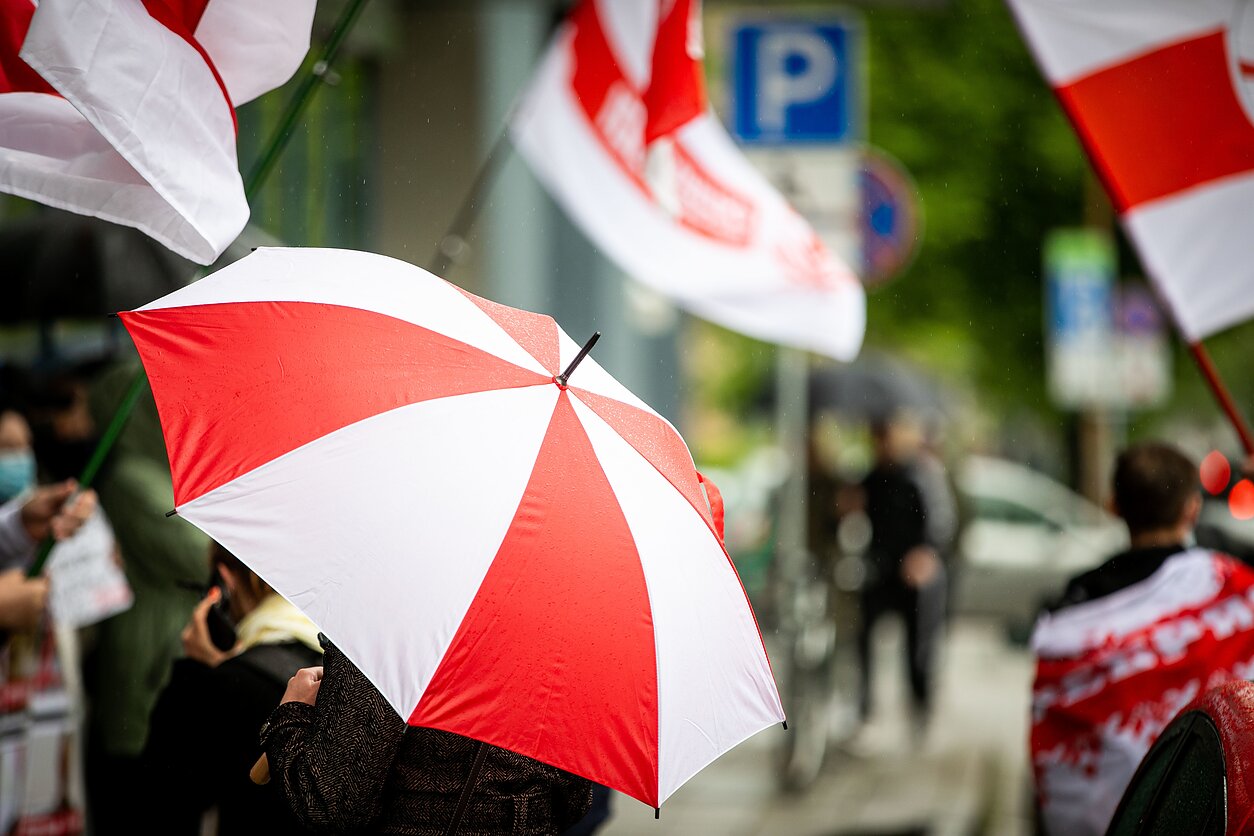 Red and white have become the symbol of the Belarusian opposition
4 / 4E. Blaževič/LRT