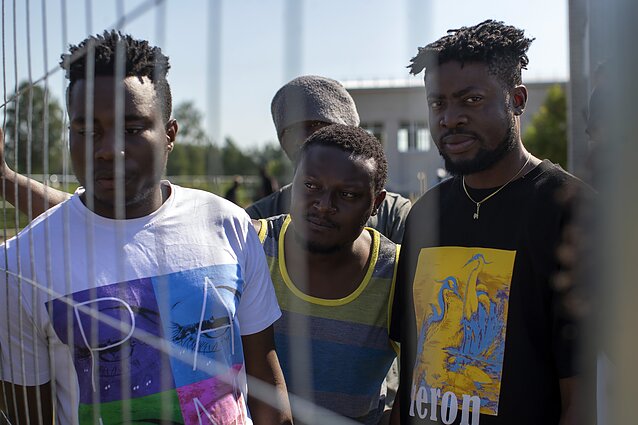 Thirty people sleep in classrooms-turned-bedrooms at Lithuania's Vydeniai migrant camp and they are not allowed to leave the compound. Having fled war and persecution in their home countries, they got caught in the middle of Lithuania's migrant crisis.

At 10:00, the disused Vydeniai School building in Varėna District is bustling with activity – the 140 migrants accommodated there gather for breakfast.

The majority of them are young adults from African countries. While some are less keen on being interviewed, they admit that journalists are a common sight.

Within a rather short time, the school building was transformed into an accommodation centre for migrants. It was equipped with additional bathrooms and beds.

The classrooms-turned-bedrooms are crowded, with as many as thirty people sharing a room at a time.

Migrants spend the day chatting with each other and local residents, playing board games or football. 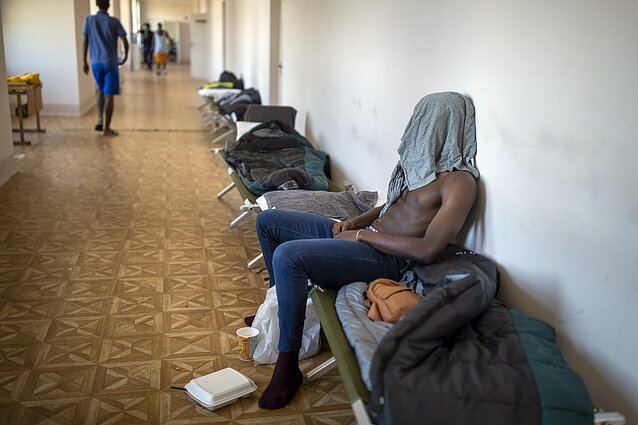 A pack of cigarettes, please

Aman Mehari, a 16-year-old boy from Eritrea, has been living in Vydeniai for two months. He came to Lithuania alone, his family stayed behind in the east African country.

“I haven’t heard anything about them, where they are and what they are doing, whether they are okay, or if they are in the war,“ said Aman. “I don’t know when I will see my family.”

Aman fled Eritrea when he was fifteen to avoid military conscription. He went to Ethiopia first, then travelled to Belarus and, finally, to Lithuania.

“I was working in Ethiopia, but Eritrean authorities entered Ethiopia later, began taking Eritrean citizens back and training them to become soldiers,” said Aman.

Aman spent three months in Belarus, but he felt in danger there as well, he said.

“Belarusians beat up one girl and sent her back to Africa. I don’t know why they did that. She just wanted to stay in the city,” Aman recalled. “Belarusians caught her, took her to a room and beat her up. When we saw that, we understood that we would not be safe in Belarus, just like in our country.”

They heard that the Belarus-Lithuania border was open and came here, Aman said.

“We want to settle here. If we were to return to our countries, we would get killed.”

When asked about his decision to go to Belarus, Aman admitted that “there was no other country that could have helped then”, and Belarus was giving out tourist visas.

In Vydeniai School, Aman shares a room with 33 other people.

“It’s hard to live with so many people, we are in a bad situation. Everyone hopes to leave this place, we don’t understand why we are still here,” he said.

“Documents say that we will be sent back to our countries, will spend two years in prison in Lithuania. I’ve no hope [...] I just pray that doesn’t happen.”

After the interview, the young man shyly asked the journalist for a favour – a pack of cigarettes.

“Everything is legal here, from one to fifteen [years old],” Aman responded when informed that smoking was not allowed for under-18-year-olds in Lithuania. 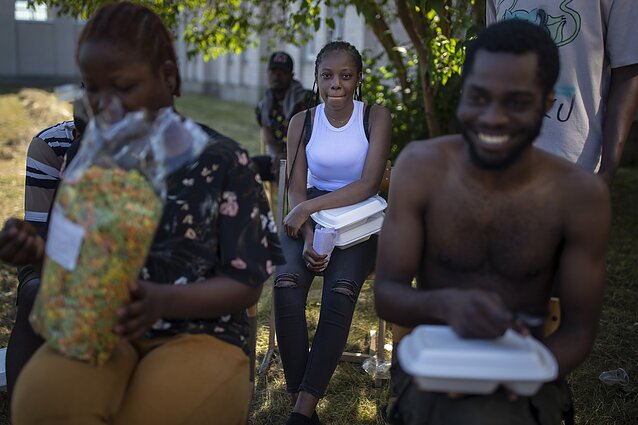 Returning home is a death sentence

Another migrant, who chose to remain anonymous, fled his home country because he risked his life for opposing the ruling party.

The current president has ruled the country for 40 years, and the young generation want change, the man explained.

“You cannot speak the truth in my country, they would just kill you.”

Despite poor living conditions in Lithuania, he said he was grateful to “Lithuanians and the government” for accommodating him here, since returning home would be a death sentence.

“We wake up in the morning, we sit inside or outside, talk, play football in the evenings, it’s how we try to find something to do,” the migrant said. 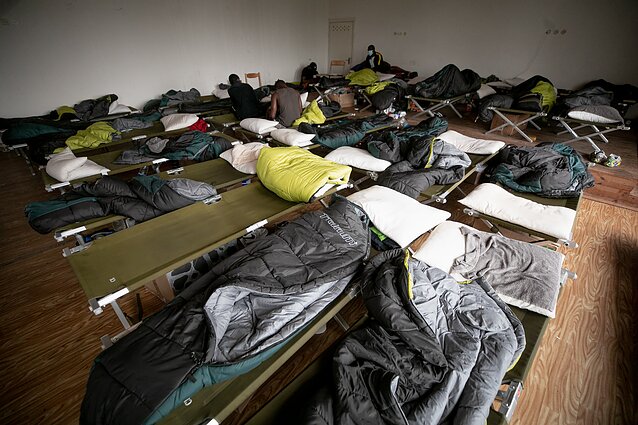 “I just pray that we can leave, it’s not easy to be in one place. [...] I just have to follow the rules. This is not like in my country, but I pray for a better future.”

Life in a cage

Among people accommodated at Vydeniai School was a journalist from Africa, who also wanted to remain anonymous. He fled the country when its president was re-elected for the seventh term.

“They began persecuting everyone who belonged to the opposition. They caught many of my friends, the majority of them are still in prison,” said the journalist. “That's why I decided to flee, I wasn’t safe there.”

The man planned to get to his friends living in Europe.

“I was told that there is a country whose border you can easily cross, and told to go to Belarus. Sadly, I faced discrimination and racism in Belarus,” he said. “I was told that students from other countries cannot work, while people from Kazakhstan or Tajikistan worked. Only we, [...] the black people, couldn’t work.”

If you do not have any money, Belarus is a prison, the migrant said.

He also pointed out that life in the migrant camp was emotionally draining. 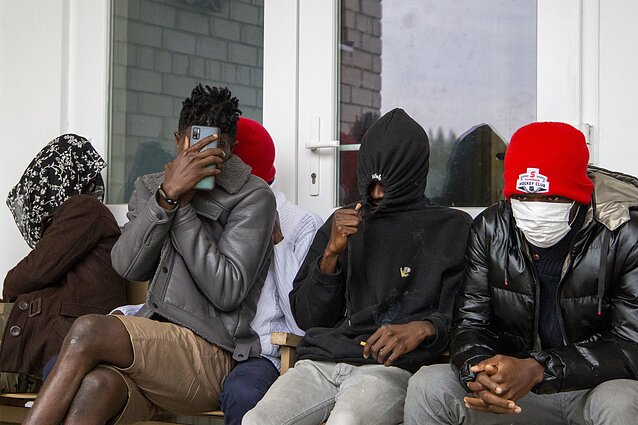 “We are in a closed territory, we spend all of our time here. I’ve already spent six weeks in the camp, every week is the same,” he said.

“You feel like a bird in a cage. We need freedom, to be allowed to move around. After all this time, it becomes a psychological struggle for many.”

Migrants are not terrorists, the journalist said, and they do not want to cause any troubles, they are just looking for a better life.

“It’s better here, it’s peaceful, no one can murder, imprison me here,” said Amin from Somalia. He fled the country due to the ongoing civil war.

“When we were in Belarus, we heard that you can cross the border. We didn’t hear anything about Latvia or Estonia. This person helped me, I don’t know how he did it, how he got me my documents,” said Amin. “A smuggler helped us, but we didn’t know him [...]. He only took a photo of me and gave me a passport.”

Amin's family helped jim pay for it, he said. 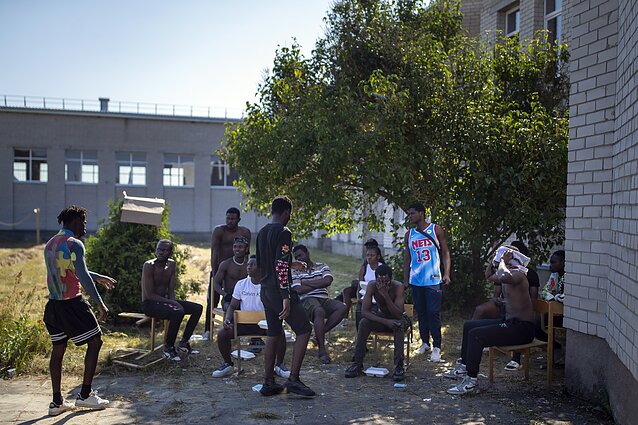 “There are no conflicts among them [migrants], there were some cases of emotional outbursts, but we talked, additional forces were called in, they understand and calm down,” Renatas Vitkauskas, head of Varėna District police, said about the Vydeniai migrant camp.

Initially people in the camp complained about having their mobile phones taken away and poor living conditions, Vitkauskas admitted.

“At first they wouldn’t even pay attention to their own hygiene, nor would they clean up their area,” he added.

There are also no complaints from local residents of the town regarding the migrant camp, according to Vitkauskas.

“The beginning wasn’t that great, the decision [to house migrants in Vydeniai] was made without consulting the community, but we had no other way, we were asked [to help],” said Alvydas Verbickas, head of administration at Varėna District Municipality.

Vydeniai residents now willingly stop by to talk to the migrants, bring them food or clothes, he said. 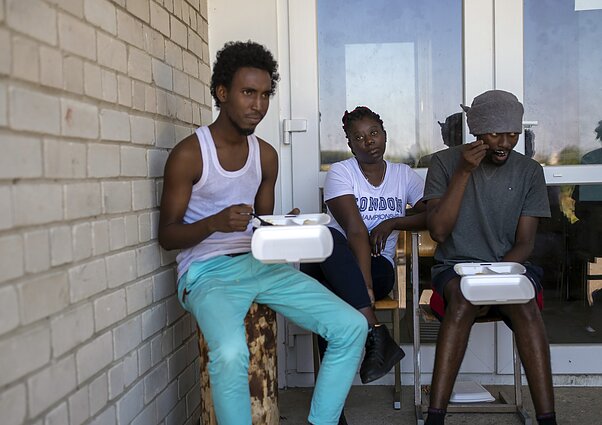 It was a challenge to turn the disused Vydeniai School building into a suitable accommodation centre in a day, to install additional bathrooms. However, the local community helped a lot, Verbickas admitted.

The demand for medical care has also grown considerably during the influx of irregular migrants, with ambulance services having received 200 calls from the three migrant camps in a month.

Over 4,000 irregular migrants crossed into Lithuania from Belarus in the past several months. Vilnius has accused the Belarusian government of facilitating migrant smuggling. To deal with the influx, Lithuania has declared a state-level emergency and has legislated that irregular migrants can be detained for up to six months while their asylum applications are processed.

The Interior Ministry has also instituted a policy of pushing back migrants who try to cross into the country outside border checkpoints. 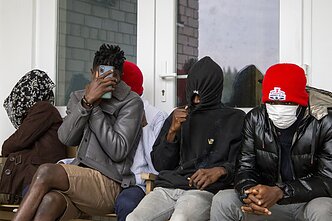 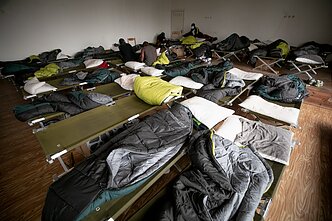 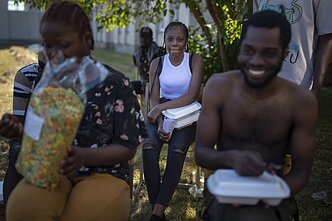 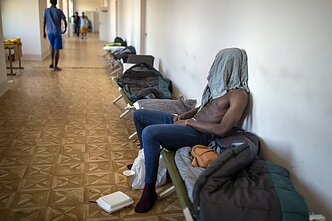 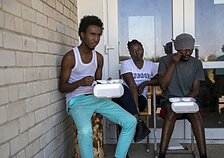 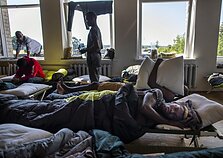 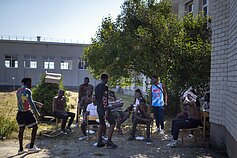