A Syrian refugee in Lithuania: His story, Syria's story 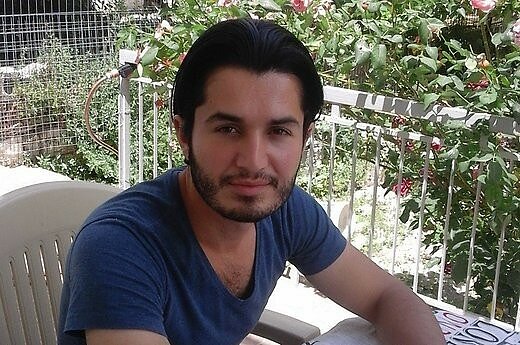 Redwan Eid, is a Syrian journalist and refugee who had to flee his war-torn homeland and is now one of the first refugees Lithuania has accepted into the country. Here is his story.

It’s a new beginning, and beginnings have always confused me, including every single beginning of all my writings...

How to start?? Which point to pick as an entrance? And many other questions jumping in my brain spring to mind whenever I write about such a critical station in my life. This one, is the most delicate, mild and solid platform in time upon which I have ever stood.

I am Redwan, a Syrian journalist, whose life has so far been full of incendiary situations, and some passing happiness, not more than that… and at this point, and before I proceed, I have a pressing desire to thank those who are taking the time now to read about an unknown person who all of a sudden appeared in their lives and started writing about himself. It is a chance for them in the same time to know what life is like for someone who survived a war, and what war is like on the ground away from the cinema as it usually embodies it?

I had always wished to write a book about my life at some future point… a book full of details about someone who has always felt that he wanted to get many things in this life and realized later that they are far-fetched! Since I wasn’t born with a silver spoon in my mouth as they say, but later, I could sense that I was born with a pen in my hand instead! Yes, a pen which registers the details life can bring.

But for now, I won’t be able to start that book. However am going to jump to the part where I had to leave my country in time of war. With many stops on the way I have come to this lovely country, Lithuania, which I have started to have fears of loving, and to look at as my home just as I have made other “homes” in Turkey and Greece, other than my home in Syria!!

Leaving my country Syria came as a result of being unable to shut my mouth about all the crimes the corrupt regime committed there against the country.

I am not talking about myself as a journalist supposed to stand by the right side and support those defeated people who got out to the streets to protest and claim their freedom from the one-party regime that ruled Syria for about five decades or even more, not at all. Journalism, the career that’s is always envisioned on TV shows as the “career of virtue”, was in Syria the career of the demon actually.

Very few journalists followed their own conscience and refused to be sold to the regime. I was one of them, and I have paid a high price, with the cost being to leave my home, land, memories, even sometimes I think my very being. I walked away, alive even though I sometimes feel like a dead body, trying to start again from the ashes.

I sometimes wonder what made us hang on our standards to that extent. Are those standards really worth what we have paid so far? And at what age, at what time, will I be able to go back home again?

As a human being, before even in my role as a journalist, I could never stand keeping silent. I was there, I should join the crowds in the streets and shout as loudly as my voice can reach: “Freedom! Freedom! Syrians want their freedom!”

What is one’s voice without freedom?

I did not leave Syria at the beginning, as powerless and powerful I felt at the time. I resisted, stayed inside, on the hope that the regime would be toppled soon, that “the group of Syria’s friends” would do something. But could a guy like me, who feels guilty if he steps on an ant by mistake, do?

Images besiege me, so many images. The walls of Syria have witnessed ways of torturing that would never occur even to the director of the Hollywood film The Saw.

The child who the army cut off his male organ and then tortured him till he died, then distorted his body and handed it to his family. He had been accused of raping the wives of the army officials. A teenage boy who had written on a wall of his school, “it’s your turn doctor,” meaning that Assad would soon face a revolution as had taken place in Tunisia and then Egypt.

The massacre the army committed in al-Houla area in Homs and later followed with another massacre committed in Al-Qubbair area around Hama. On both occasions the army came and slaughtered children and infants alive and burned them in front of their parents and families.

The child who begged one of those soldiers as he was coming to slay him, “Uncle please--please uncle--slay me without making me feel the pain--please uncle please--I beg you to do.” That soldier himself leaked the video to the social media websites to plant the horror and terror in the hearts of the others.

The woman dragged by the army along on the ground, another woman who the same army uncovered her veil on her head, which for a Muslim deeply-believing woman would be as if they had stripped her naked.

Detentions where people were tortured to death. Taking young men to the military service which in fact was the “killing and crime-learning service”.

Boiled oil and water poured on the detainees’ bodies to extract confessions for actions they hadn’t committed. Every imaginable sex crime committed against women and men alike.

Whatever dirtiness and filth could ever exist in this world would start from those basements, and you can never count the shouts and screams released from the detainees there who beg for their death. Death is a far-fetched wish and luxury in Syria.

All those images and sounds keep surrounding me day and night, stretching me from both my hands opposite-wards, till I am totally torn apart.

One night, I surrender and find a corner and squat there and lay my head on my knees, hugging my legs in my arms. I try to feel warm but I burst into tears. For I can’t change it, nor I can do anything to help on the ground and save some blood.

Later, I log in to Facebook to find myself faced with the most answerless question ever asked: “What’s on your mind?” What do you think is on my mind after all this, Mr. Zuckerberg? Nothing. Nothing but to unleash the weak side of myself and cry.

I wrote against the regime and revealed its suppression and ways of torture its men and mercenaries use against the detainees, with my real name and picture.

I am brave, OK, but I had to live in fear of getting arrested for that any moment.

I wrote directly against the regime, Bashar Al-Assad, and some of the people around me knew where I lived.

Would people come up the stairs of the building? Would our house door be knocked at? Were they some military or intelligence agency branch came to capture me and take me away to a destination where no one would know of?

I thought like that almost every night, until I surrendered to sleep, after I handed all my life to Allah and pray to him to not burn the hearts of the people who loved me as something bad happens to me.

And living in that state of fear for a while made me think of leaving the country, and in a miracle, I found out I could be smuggled to Turkey.

Next week – the next installment of Redwan’s story