International internship - a win win for companies and students 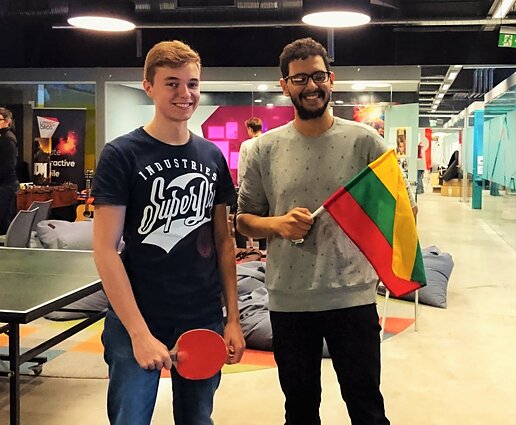 More and more Lithuanian businesses have plans to expand to international market, but most of the time they don’t know how. Foreign interns in Lithuanian companies are not a novelty, but still an unusual phenomenon. Students are always dreaming about international experience, but business does not always see the benefits to provide international internships. Business expansion is one of the biggest benefit.

Lithuanian IT cluster Blaster in cooperation with ClickOn company from Switzerland invited two french interns for an international 3 months internship. Daniel and Omar, students from France, came to Kaunas at the very beginning of spring to explore the international experience in IT field. A short interview with interns revealed the biggest benefits that companies get out of international internships.

Probably interns know a lot more about benefits that companies get from foreign interns than companies itself. When Daniel and Omar were asked about why companies need foreign interns they shortly responded that it is a great asset for Lithuanian employees to discover other cultures at the same time developing English skills. They also said that it is great learning how to adapt to people with different mentalities and it is good to know how people work in different countries.

Foreign interns of Blaster at the end of their internship named specific benefits they brought for companies in Blaster. And it was tangible benefits. Both interns created real products for companies, such as Facebook Apps, Google Chrome extensions and they have also completed numbers of tasks, needed for companies to implement IT projects. So if the are still some more doubts about inviting a foreign intern, the benefits for companies are listed below:

If companies gain so much benefits from foreign interns, another question is - do interns get so much benefits from international experience? And the answer is yes. Students from France where truly happy about their international experience in Blaster as they have named lots of benefits for themselves. The biggest asset for interns where not only the experience and knowledge, gained during the internship, but also Blaster felt like a family for them providing best working environment. IT skills, English skills, cultural and communication skills were also named as benefits, also as an opportunity to realise their future possibilities, plans and dreams.

Lithuania was a great start for french students as it also was a great experience for Blaster to have them. It is not a first Blaster is a community of companies and IT specialists, founded in Kaunas, Lithuania in 2015. Foreign interns worked with 3 Blaster companies: TeleSoftas, ADEO WEB and SneakyBox.