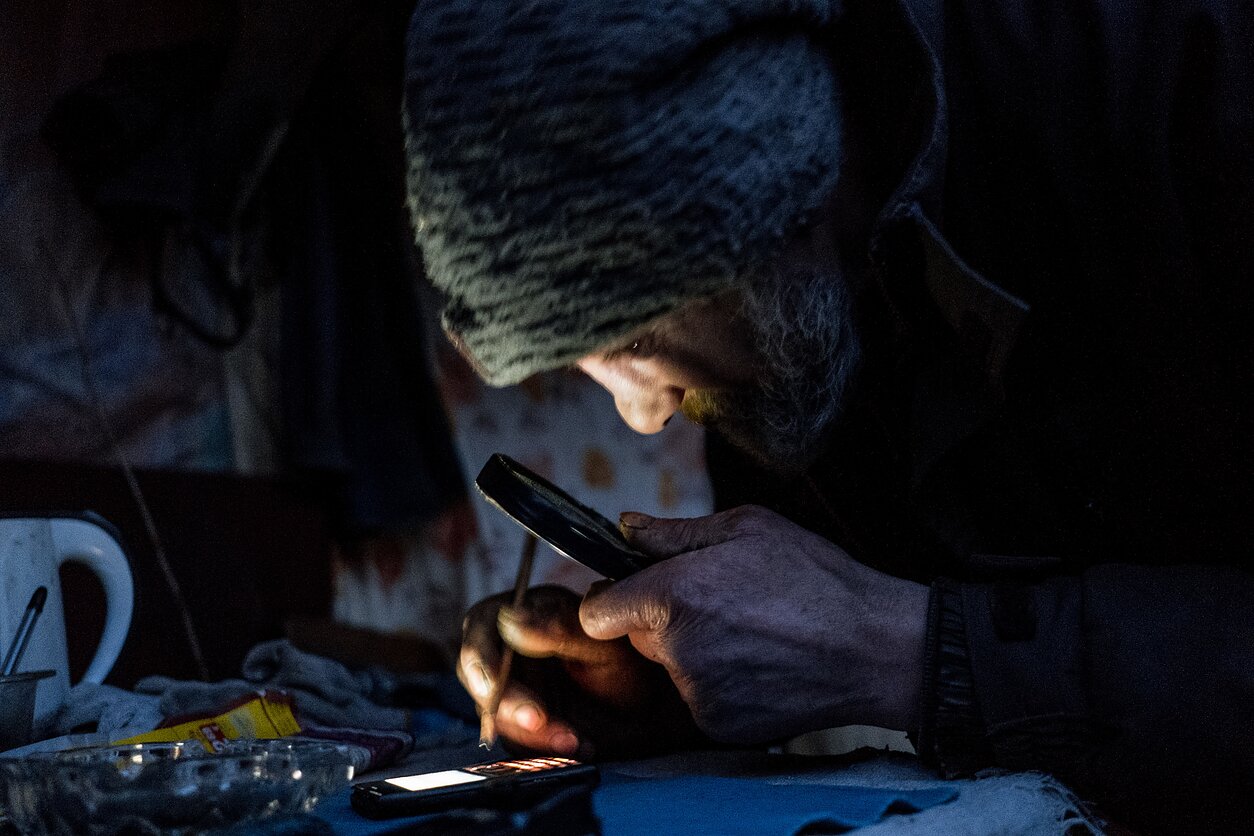 In his wooden home in the Nemunas Delta, Česlovas Rutė types out poem after poem on his old Nokia phone. As its memory clogs up, he sends out his verses to different recipients. Rutė then clicks delete, wiping what was left on his phone, and starts again. “What is the point in writing if no one will read it?“ he says.

On the table there is a list of names: here he marks which of his poems were sent to whom and when. Rutė‘s work is a reflection of everyday life at Uostadvaris village. The poet sees it as a “shelter from the pain of daily life“.

Much of his early writing, however, is lost, as some time ago his neighbour borrowed and then pawned his phone.

“Let’s drink some coffee first, get warm. How many tablespoons [of coffee] would you like?“ he asks upon welcoming me in his wooden house. “Sometimes fishermen I know come by to sit down and get warm,“ says Rutė, as we observe the surroundings. 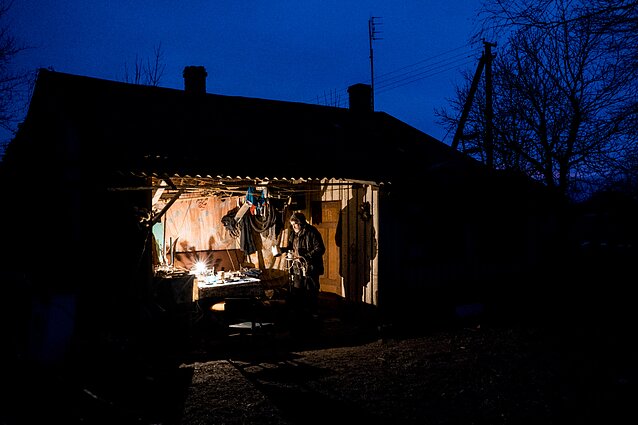 The Atmata river is some thirty metres away – we could hear the ice crack as it moved along the shoreline. The springtime flood had already reached its peak, with fields, roads and houses submerged in water.

Česlovas Rutė has lived alone ever since his wife died fifteen years ago. “I am much like Jerome Salinger, a loner. He, too, retreated from the public eye after finishing The Catcher in the Rye.“

His daughter lives away, working as a music teacher in Vilnius. Rutė’s dog Bugis, as well as his neighbours, keep him company.

“I was a year old when my father brought us here from Žemaitija in 1963. Mom used to say that they made it there during the springtime flood,“ the poet tells his story. “There were no bridges to Rusnė Island back then, only a ferry and an amphibious boat. So they took this boat and got here, having battled wind and ice. My mom truly was confused as to why we were here.“

Rutė explains that the village residents all come from other regions, such as Žemaitija or Dzūkija. The people were forced to relocate here and populate the village, empty after the war. 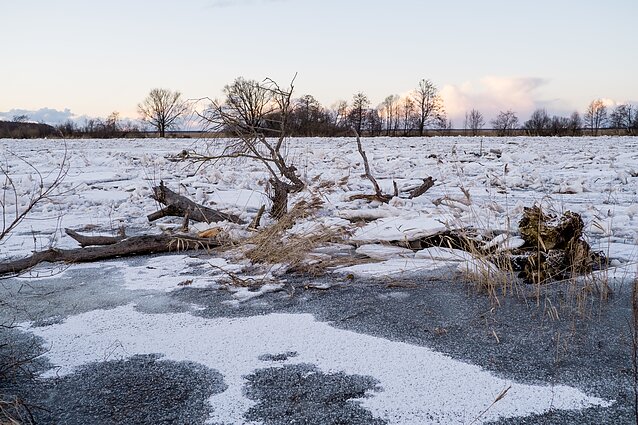 Residents at Rusnė island are straightforward and unsentimental, but that may be because of the harsh weather, the poet observes.

“In general, they are kind people. There were some moments where everyone got together and helped each other, brought food to lonely residents affected by the flood,“ says Rutė.

“Back when there was no bridge [built in 2019] to the island, amphibious boats were used to transport coffins. The funerals were like that, one would be transported across the water. Harsh conditions, it unites people.“

When the flood starts, Rutė says, people start hanging out together more. The earlier residents have a habit of walking alongside the river during those times, watchful of the rising water. When the flood gets worse, the embankment is full of people. Men stand there and think, all together, the poet details.

“You cannot know how the flood will behave,“ says Rutė. “Even now, the ice has stopped moving, as it froze due to last night’s cold. No one can tell when it will start moving again.“

Read more: And then came the flood. A dispatch from Lithuania's biggest island 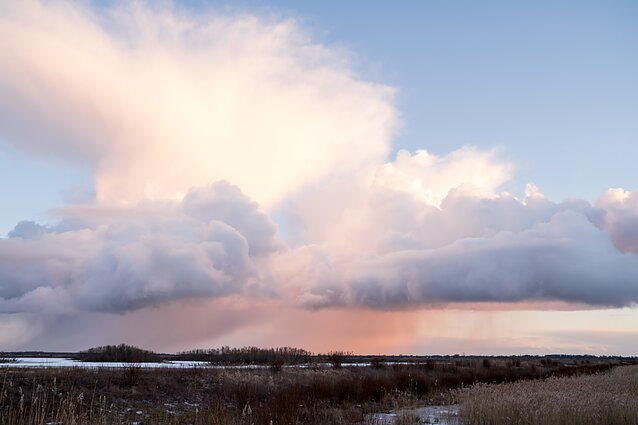 Česlovas Rutė started writing poems back in 1980. Inspired by his life at the village, everyday walks alongside the river, and loneliness, in his poems he describes nature, as well as ponders of existence.

The poet recalls being good at writing, and praised for receiving good grades from essays and dictation tests at school.

Rutė admits to writing quite impulsively.

“Suddenly an idea comes, and, on that first impulse, I immediately start creating the first verse. It is so important, this verse, it comes after some spark in me. You start writing and it goes so well,“ he says. “Such moments usually happen while looking through the window. […] There is always something happening outside: a woodpecker flies by, there are so many birds. The experiences stimulate creativity.“ 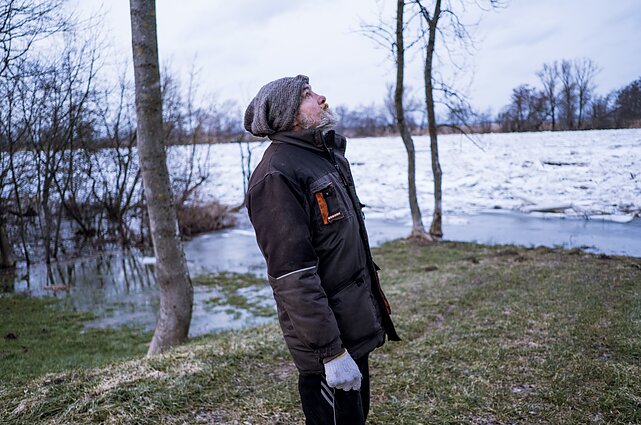 The poet admits that, despite impulsive, daily-life-inspired writing, rhyme, consistency and the ability to logically follow a piece of writing matter to him. “Of course, real experience and imagination matter. Skills in writing come after. There should be some, at least.“

Rutė believes that poetry should come from suffering and real experience. Someone who lives a safe, comfortable life cannot be a good poet. According to him, “there needs to be some pain involved“ in poetry.

The poet admits to preferring the works of renowned Lithuanian poets, such as Jonas Strielkūnas, Paulius Širvys, or Justinas Marcinkevičius.

“I tried reading some [poetry] from the younger poets. To be honest, it is not really for me,“ he says. “I do not get it; it does not move me. Different things are relevant to me. I like the more ‘down to Earth’ poets.“

“I was, at one point, a workaholic. Nowadays, no matter how much fun I’m having while working, when an idea comes I need to return home, make some coffee, and write it down,“ describes Rutė. “Because it gets lost otherwise. If you don’t write it down, the idea just leaves.“ 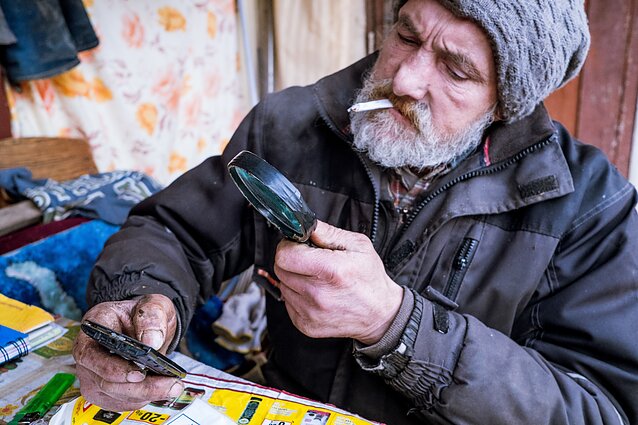 ‘Will have to delete some tonight’

Rutė keeps two old keypad phones on his table. One of them he uses for poetry writing.

All the poet needs to start writing is his ‘poetry’ phone, a pencil for pressing the buttons, and a magnifying glass that he uses to zoom in on the small screen and keypad.

Sometimes Rutė writes on paper, carefully counting letters so as to not exceed the SMS message limit. “These phones only allow sending 14 parts at the most, so I need to be concise. Such a way of writing teaches one self-discipline.“

He can, however, only store 15 poems in his phone, so he deletes the old writings to make space for new ones.

“It’s a pity. Sometimes I send them over to my other phone so I can keep them. I will have to delete some tonight.“

To Rutė, such a way of writing poetry – typing it all down and sending to someone he knows while enjoying a cup of coffee – feels like a sort of therapy session. He admits to receiving some nice, encouraging replies on his works. 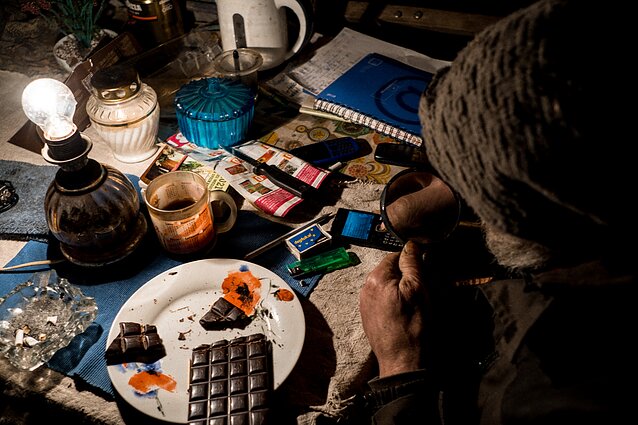 ‘For half an hour I will feel lonely again’

He admits to rarely reading his poems out loud, as he mostly just sends them to others. One of his wishes is to have a poetry book released, which the officials in Rusnė had promised.

There are not that many poets living in Rusnė, so Rutė travels by bike to other towns, such as Šilutė, to participate in poetry circles.

As the evening approaches, Rutė brings in his table lamp. The poet admits he would love to have a wife, someone he could share his household chores with. But no one wants to come to a small village with no job opportunities.

Rutė says he cannot really understand when his friends who come from the city say they feel happy here. “Maybe I cannot feel it myself? Maybe everything seems different when you come from a bustling city?“

For many years his sister would visit him and help him in the fields. Perhaps, Rutė wonders, city dwellers want to experience what true, natural soil feels like. 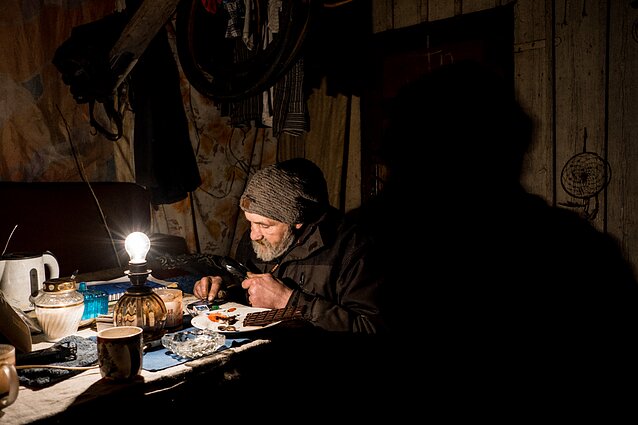 “Here, my sister wrote down all the writers who lived alone. Arthur Rimbaud, Harper Lee, Thomas Pynchon, Elena Ferrante, Jerome Salinger. All loners,“ Rutė details his connection to the writers. “I suppose I am like that too, a loner.“

“I am lonely without even comprehending it, because I am so used to it,“ he says. Rutė’s life is punctured by rare visitors, but once they leave, he is reminded of the emptiness.

“And for a few days I feel empty, lonely. See, I had a pleasant talk with you this evening, too. And when you leave, for half an hour I will feel lonely again.“ 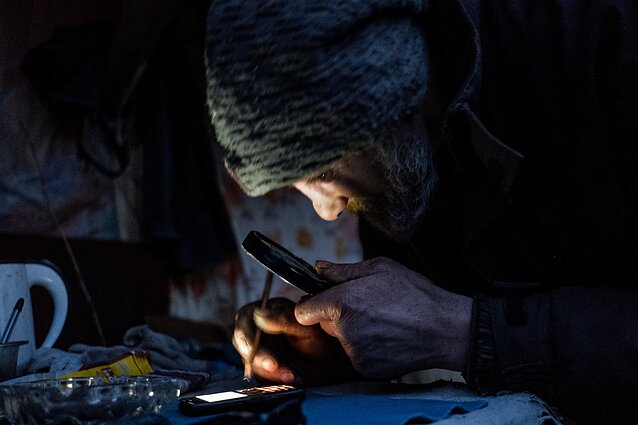 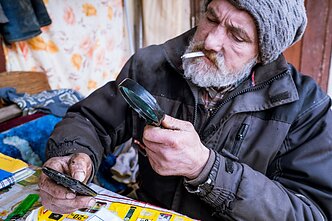 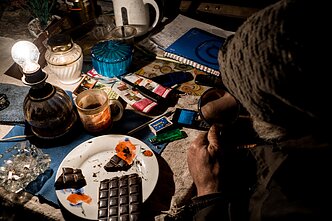 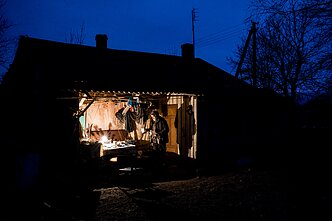 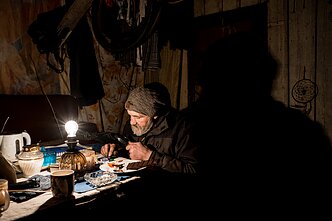 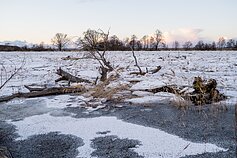 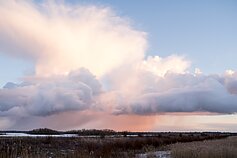 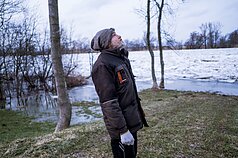