Investors sue Lithuanian bank over investments that may leave them homeless 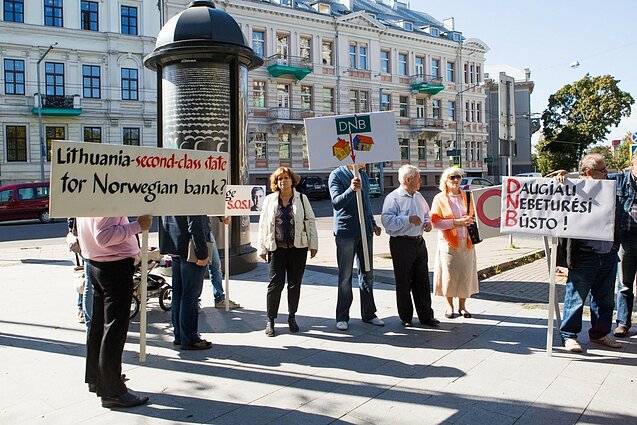 They argue that the bank actively marketed the products to them and convinced them to borrow funds to make the investment.

The Supreme Court of Lithuania recently ruled that investors and the bank must split the losses by half. However, some clients, especially those who mortgaged their homes to purchase the investment products from DNB, argue it is still unfair and that they will go to the Court of Justice of the European Union.

Before the bust of 2008, DNB, like other banks in Lithuania, was offering its clients special investment products, stock-linked bonds (su akcijomis susietos obligacijos, SASO, in Lithuanian), a form of insured investment whose returns depend on the value of the equity it is linked to.

One of the clients who took up the offer was Gintautas from Vilnius. He tells DELFI that he received a phone-call from DNB, offering to invest into stock-linked bonds and even mortgage his house to buy more of the financial product which he was told was a risk-free investment.

"The worst thing is that I had no previous business with DNB - not even a bank account. I was simply targeted as if by a telephone scam. It was all their initiative, I don't even know how they found me. They phoned me up and said: come and let's talk. They said there's no risk of losing money, only gains. Besides, your house is not mortgaged, why not put it to work and make some money," Gintautas recalls.

Instead, his investment suffered a €174,000 (LTL 600,000) loss, half of which he has to cover, as per the court ruling. Gintautas says he had to sell his house in order to return the debt to the bank and now lives with his grown-up daughter who had to take out a loan to purchase a home.

He says he is sure that DNB misled him when it offered to invest and should therefore shoulder the full responsibility. "When a buyer buys a half-faulty product in a shop, he does not have to suffer the loss. In this case, the court ruled that the bank was not entirely in the right, so why should the clients suffer?" Gintautas asks.

An investigation by state regulators in 2011 found that DNB sold bonds to 640 individuals who took out loans to buy them.

About 60 of them mortgaged their homes and have been litigating with the bank so as not to lose their properties, says Kęstutis Kupšys, executive manager of the association "Už sąžiningą bankininkystę" ("For Fair Banking"). The Lithuanian Supreme Court's ruling that the bank must split the losses with the clients "contains some good points", he adds.

"Most clients are not satisfied with the decision that the losses must be divided by half. They have mortgaged their land or their homes. It doesn't make much difference whether they have to cover half or all of the sum - they will still lose their homes, they will have to sell in order to return the other half to the bank," Kupšys says.

Moreover, selling their homes might not even cover the mortgage they took out at the height of the property boom.

He says that about 10 to 15 people want to go to the Court of Justice of the European Union and argue that, since the Lithuanian court said the bank is partly to blame, they should divide the losses at different ratios and not necessarily the "Solomonian" fifty-fifty.

"If the court says that the bank is at fault, why should it get half the profit at people's expense? People's fault is that they trusted the bank, why should they be penalized so harshly for what the court said was their 'absent-mindedness'. The initiative came from the bank, people didn't approach the bank about buying the bonds, it was the bank that offered," Kupšys argues.

However, he adds, even if the Court of Justice of the European Union accepts to hear the case, it may take years before there is a ruling. "But there is no other way for people who are facing homelessness."

Some clients profited, some lost

DNB spokesman Valdas Lopeta comments that Lithuanian courts are capable of litigating disputes between the bank and its clients, so there is no need to turn to the Court of Justice of the European Union.

He tells DELFI that Lithuanian courts have issued different rulings to different clients and not all of them involved splitting losses by half.

"Either way, when the court hands down the final ruling which is not subject to appeals, the bank carries it out," Lopeta says. "Only a small portion of our clients bought stock-linked bonds on borrowed funds. Even fewer invested borrowed funds they drew from mortgaging real estate."

He would not say, however, how many clients mortgaged their homes to purchase the financial products, insisting that the majority used their own funds.

Moreover, Lopeta says, DNB did not take ownership of any of the mortgaged properties nor auctioned them to recover the debt.

He adds that not all of the bank's clients who invested in the financial products suffered losses.

"Part of the emissions were profitable, others were loss-making due to the financial crisis, so some clients made money while others, unfortunately, suffered greater or smaller losses," Lopeta says.

He says that, as of 2008, DNB has not been issuing loans to purchase bonds and has stopped selling stock-linked bonds.