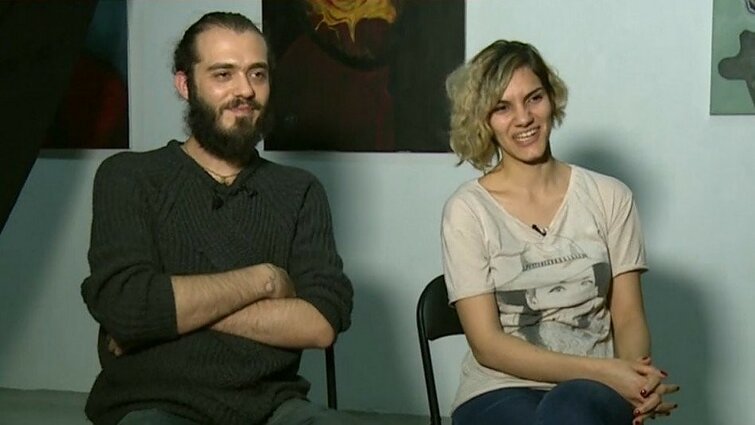 An artist and a refugee Majd Kara held his first exhibition in his adopted home, where he was reallocated in March, under the EU agreement.

An artist and a refugee Majd Kara held his first exhibition in his adopted home, where he was reallocated in March, under the EU agreement.

‘People who saw the paintings say that they are deep and you can see something behind them’, says founder of the art centre House of Puglu, which held an exhibition.

Kara has painted 26 works since his arrival, and all of them are show-cased in exhibition in Vilnius, where Kara would like to move soon.

At first he was sent to the Rukla Refugee Centre, and painting has since been one of very few ways to fill the time, in a tiny village in the middle of a wood.

‘When we first came to Rukla it was almost in the middle of nowhere’, said Kara who has been reallocated together with his girlfriend Farah Mohammed.

They left their homes last August, just two weeks after they met, and fell in love as the fighting became unbearable. Each paid $600 to board an overcrowded lifeboat to make the crossing to Greece, at first aiming for Germany where they have friends and relatives.

They later submitted themselves to a legal resettlement plan and thus arrived in Lithuania, of which they knew nothing but the name.

Lithuania has agreed with the European Union to accept 1,105 refugees from Syria and Iraq, although so far only several have been reallocated.

Kara says, after his long journey, it was hard to adjust to life in such a quiet corner of the country, and the couple are hoping to move on to somewhere else in Lithuania.

‘I can create my art in any place, but as for a social life, it’s a different thing. So, when I say Rukla, Lithuanian people, they say oh…’ says Kara.

This man is forced to listen, to listen and not talk. Therefore he is weak, he just listens and he can’t express himself.

This man is surrounded by shadows, he is not separated from what is happening around him, he is not in the centre and does not have his own attributes.

People who saw his art, most of them, say that the paintings are deep and you can see something behind them.

Kara and Farah on a walk in Vilnius

When we arrived there we met some people from the reallocation program who were trying to convince us that this is new program is best for us. So we just took a chance.

The only difficulty for people is that they are afraid to go to a place that they don't know. Most of those who leave the country know some people in some place, so of course they prefer to go where they know people.