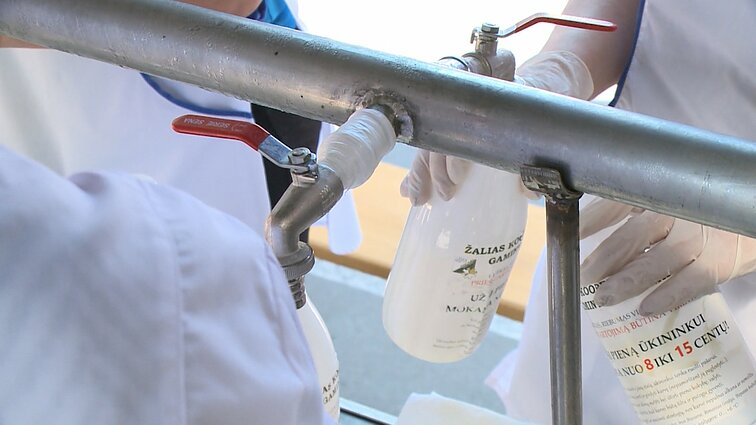 Dairy farmers‘ cooperative Milk Flower brought 6 tons of milk and gave it away outside the Ministry of Agriculture in capital Vilnius. Some people, for that free milk, left voluntary donations.

Organizers of the rally say farmers are paid only 15 cents per litre of milk while the milk in retail market can cost up to 1 Euro and more.

The main goal of the rally was to draw attention to the small portion of the retail price that is left for dairy farmers. It used to be higher, and farmers blame milk processing companies for taking the advantage.

‘When people get free milk here and when they see what is left for farmers they will probably raise questions’, said organizer of the event Andriejus Stančikas.

Dairy farmers now get around twenty three percent of the retail price, while several years ago – around thirty four, according to analyst Albertas Gabšys from the Lithuanian Institute of Agrarian Economics.

Lithuanian milk sector was hit with the loss of Russian market. The milk quota being lifted in 2015, the market was flooded with product.

It was not the first farmers’ protest urging the government to solve problems plaguing the dairy sector. In March, Lithuanian Milk Producers’ Association staged a massive and colourful protest with a cow’s skeleton in a car trailer.

Lithuanian government promised its support for the dairy farmers and assured it is making every effort to secure additional assistance from the European Commission.

All of us are consumers these days, and when we go shopping we see that prices are very different. When people get free milk free here and when they see what is left for farmers they will probably raise the question how the price paid by consumers is distributed among the processing company and reseller, and why such a small part of it goes to farmers.

Farmers work very hard (I have certain experience in this field), and while prices in stores are unreal, so it is really better to give away milk here directly.

Talking about the milk price structure in the retail market, it used to be that the part going to farmers comprised around thirty four or thirty five percent in that price. Now it is twenty three percent, among four major market players – that difference of the ten percent taken by the processing companies.