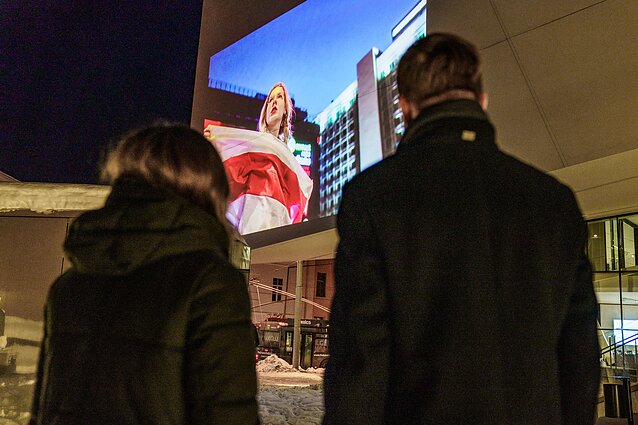 A museum in Vilnius, Lithuania, has launched an exhibition featuring the work of five female Belarusian photojournalists covering the protests against the Belarusian dictator, Alexander Lukashenko. Meanwhile, in Belarus itself, culture is being “suffocated”, says a new Amnesty report.

An exhibition highlighting the brutal repression carried out by the Belarusian authorities against the country’s opposition, and the bravery of the many women who have formed human chains, often holding flowers, has opened in the Lithuanian capital Vilnius.

The outdoor projection, The Future of Belarus, Fueled by Women, reflects the female view of Belarusian photojournalists covering the women’s protests.

It is, alas, a sad coincidence that the exhibition opened on the same day, February 18, that two Belarusian journalists, Katsiaryna Andreyeva and Darya Chultsova, were sentenced by a court in Minsk to two years in prison after filming live coverage of protests last November. 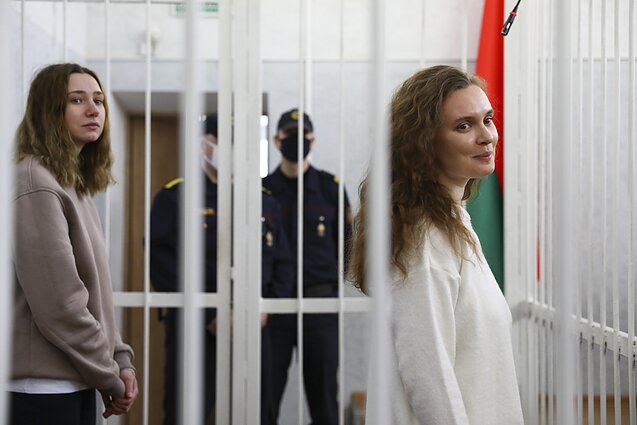 “It is to Belarusian women that this exhibition is dedicated,” says Svetlana Tikhanovskaya, the leader of the Belarusian opposition, who challenged Alexander Lukashenko in a presidential election in August 2020.

Protests against Lukashenko began immediately after he declared himself the winner of the election with an implausible 80 percent of the vote.

Tikhanovskaya was forced into exile, in Vilnius, shortly afterwards, from where she has continued to call for a new, free and fair election, and for Lukashenko to step down.

“A few days ago, we – Lithuanians – celebrated the day of the restoration of our state, we celebrated freedom, we remembered the difficult path we had to follow. Belarus has chosen to follow this difficult path to freedom too. Vilnius is always open to bold ideas, creativity, freedom of expression, but it has also become a safe asylum for our Belarusian neighbours,” says the city’s mayor, Remigijus Šimašius. 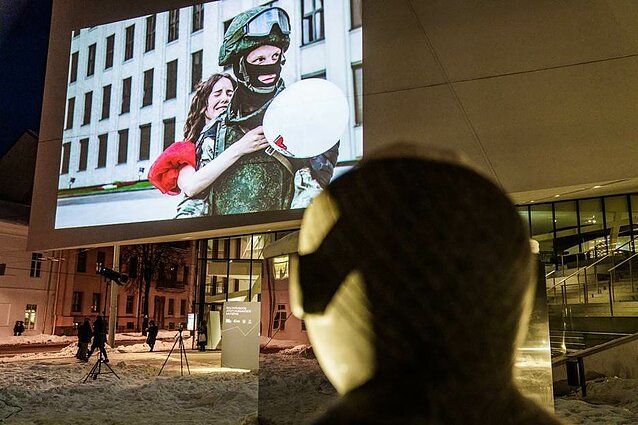 The exhibition, which projects images onto the exterior of the MO Museum, reveals the contrast between peaceful protest and the overt violence unleashed by Belarusian authorities.

The five featured Belarusian photographers – Nadia Buzhan, Darya Burakina, Iryna Arakhouskaya, Volha Shukaila, and Viyaleta Sauchyts – all understood the importance of carefully documenting the most important events of the 2020 protests against election fraud and the subsequent violence committed by the regime of Lukashenko throughout Belarus.

They show how the so-called women’s marches steered the protests onto a peaceful course and shaped the agenda of the ongoing Belarusian revolution. 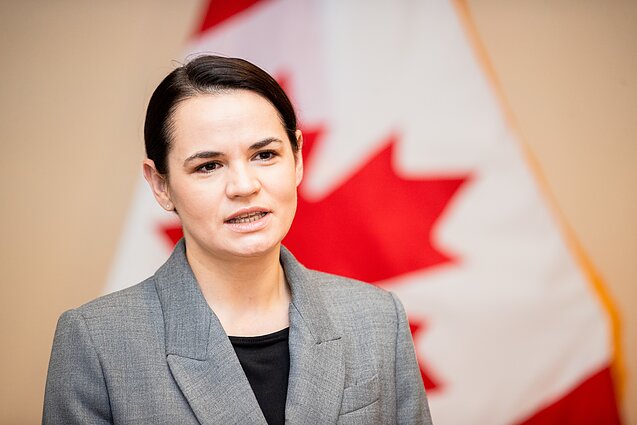 “The regime’s cronies did not understand that they made the political struggle personal for every Belarusian family. It might be possible to pressure the opposition, but it is impossible to overcome the entire nation,” she says.

“This exhibition is also relevant to us Lithuanians,” says Milda Ivanauskienė, director of the MO Museum. “The confrontation of peaceful protest with brutal force is reminiscent of our struggles for freedom.”

“In this context, it is important to pay attention to the significant participation of women in state-building. This is also relevant for us, bringing to mind the February 17 protest of 1918 demanding the inclusion of women in the Council of Lithuania.”

The photographs are projected onto the MO Museum building from 18:00 to 23:00, and the exhibition runs until March 4.

“This outdoor projection will be another opportunity to safely enrich the reality of quarantine with artistic projects and culture,” adds Ivanauskienė. “At the same time, it will be an opportunity to rethink freedom and its meaning – in many ways, both from the perspective of the state and the nation, and personally.” 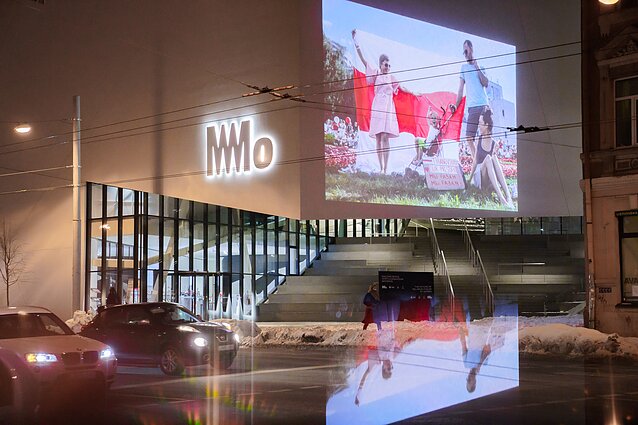 Meanwhile, in Belarus itself, the country’s vibrant cultural scene is being suffocated amid the brutal crackdown on dissent, with authorities arbitrarily detaining and torturing artists, musicians, writers and actors, and forcing others out of their jobs, Amnesty International has claimed.

In a new briefing, part of the #StandWithBelarus campaign, the organisation highlights how the government clampdown is stifling Belarus’s cultural sector. A growing number of cultural figures are facing unfounded criminal proceedings, including some who are being held behind bars and face long prison sentences.

“The scale of repression against the Belarusian cultural scene cannot be underestimated. The authorities are methodically destroying Belarus’s spirited cultural life and its most creative members, in an effort to suppress all vestiges of free expression and dissent,” says Aisha Jung, Amnesty International’s senior campaigner on Belarus.

“Those who dare to voice criticism of the Belarusian authorities, through creative and artistic means, are being relentlessly persecuted.” 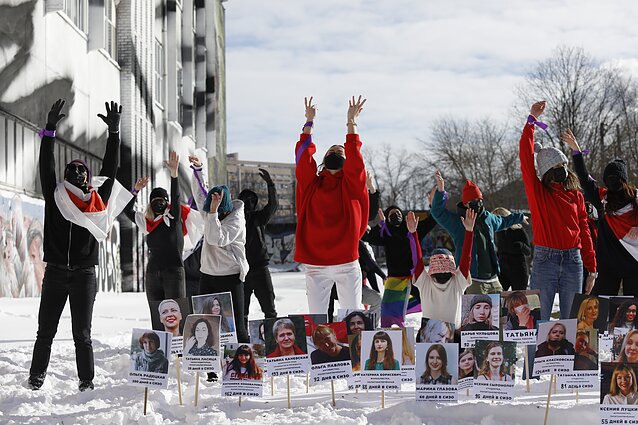 Vola Semchanka, an amateur folk singer and dancer who used to work for the Mahilyou State Theatre as a communications aide, told Amnesty International how she has faced multiple arrests and fines since October 2020 for participation in “unauthorised” meetings, and harassment in her workplace.

The theatre director at the time refused to sack Vola and other dissenting artists. He was then fired himself. Many of Vola’s work responsibilities were then withdrawn and she feared she would lose her job altogether. This is exactly what happened, on February 18, after the briefing featuring her story had been finished for publication.

“After my first detention I felt scared to come home, I slept at friends’ houses most nights. Now I’m used to living with this constant sense of danger. We are all ready to become victims of state persecution at any moment,” says Vola.

It is not only individuals but entire cultural institutions that fall victim to government reprisals, including the country’s leading Yanka Kupala National Academic Theatre. In August 2020, the theatre’s director Pavel Latushka spoke out in support of peaceful protesters. His contract was immediately terminated and more than 60 theatre employees, including almost all the actors, left in protest.

“We will not stand by while the Belarusian authorities gag the country’s most creative individuals. Our global solidarity campaign supports all peaceful means of protest and resistance by the Belarusian people, against the authorities’ cynical and sinister efforts to deprive them of their human rights and curtail their access to diverse ideas and opinions,” says Amnesty’s Jung.

The story originally appeared on Emerging Europe, a partner of LRT English. 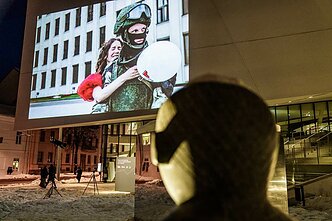 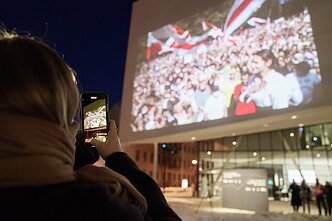 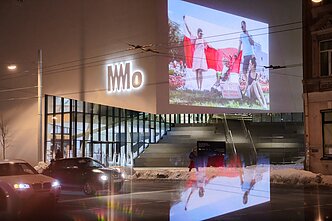 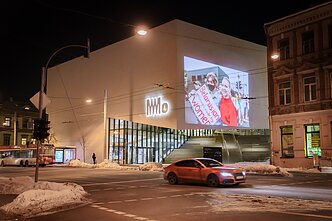 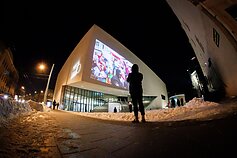 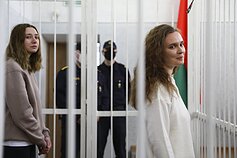 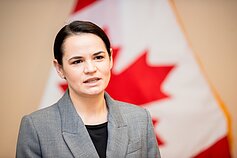 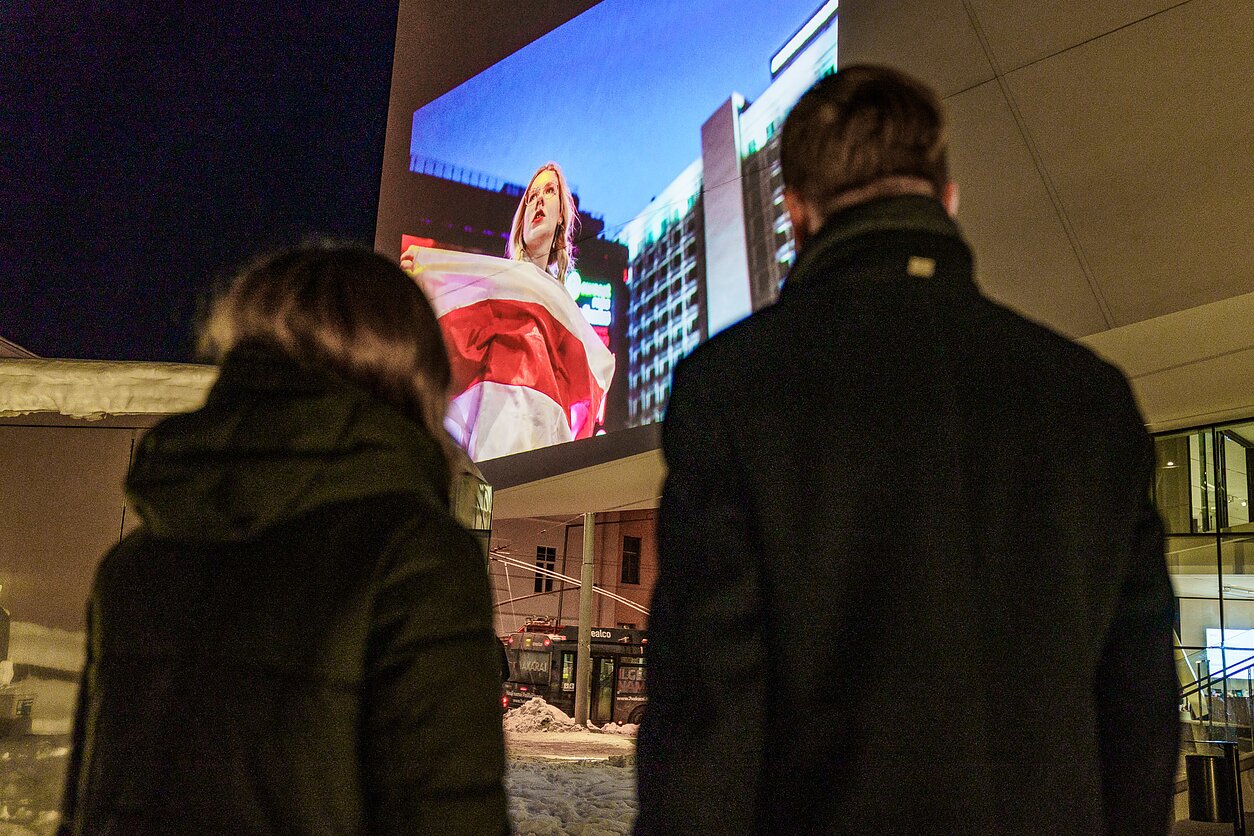 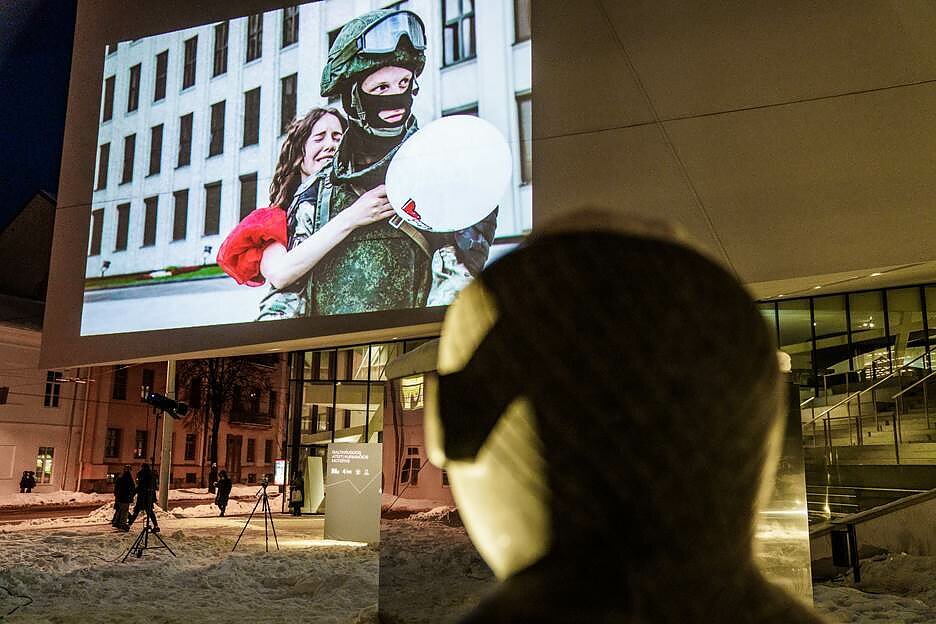 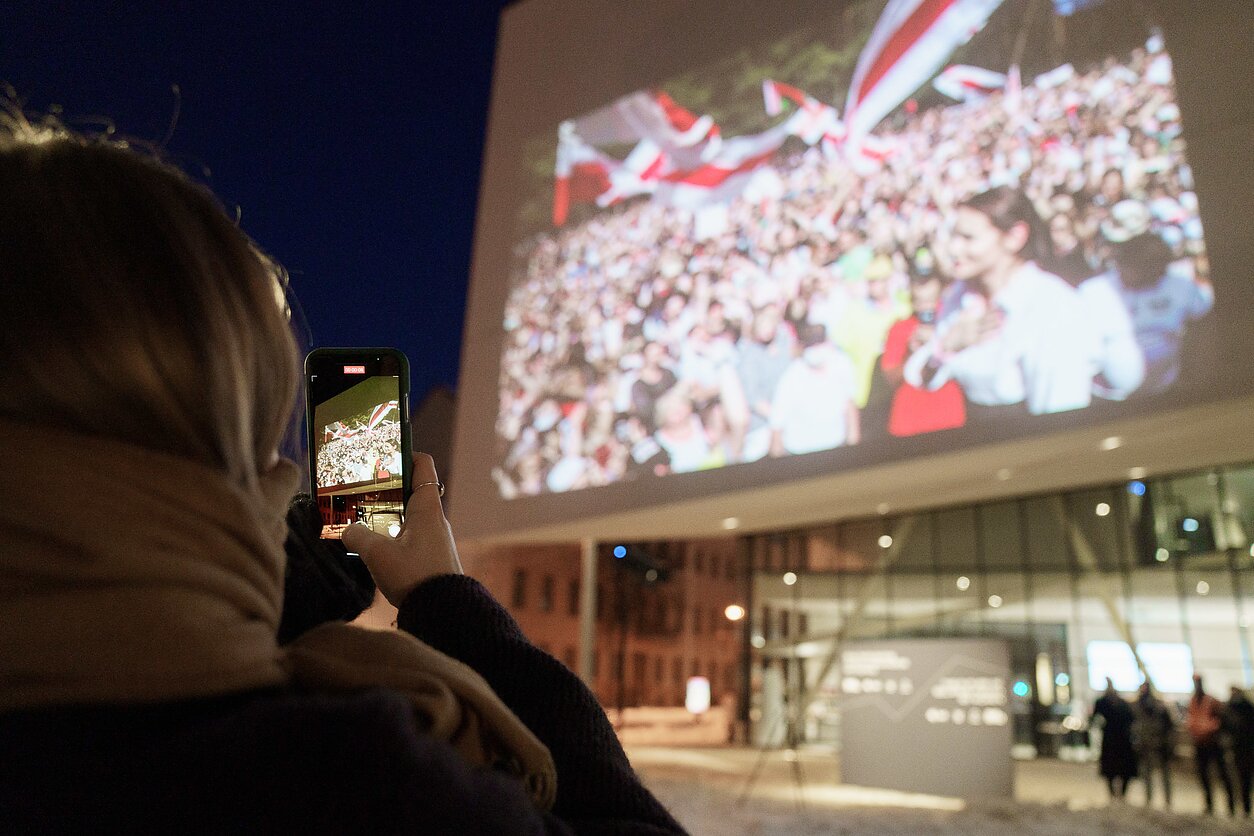 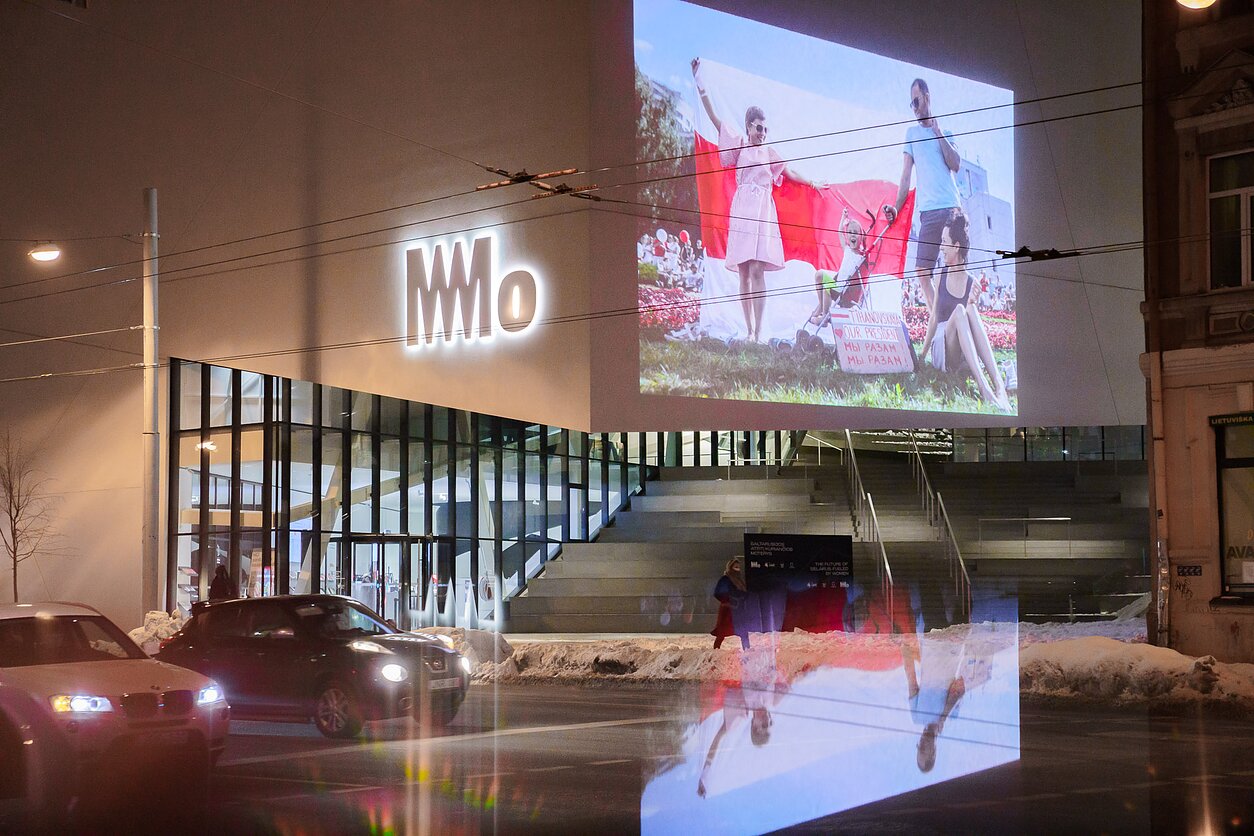 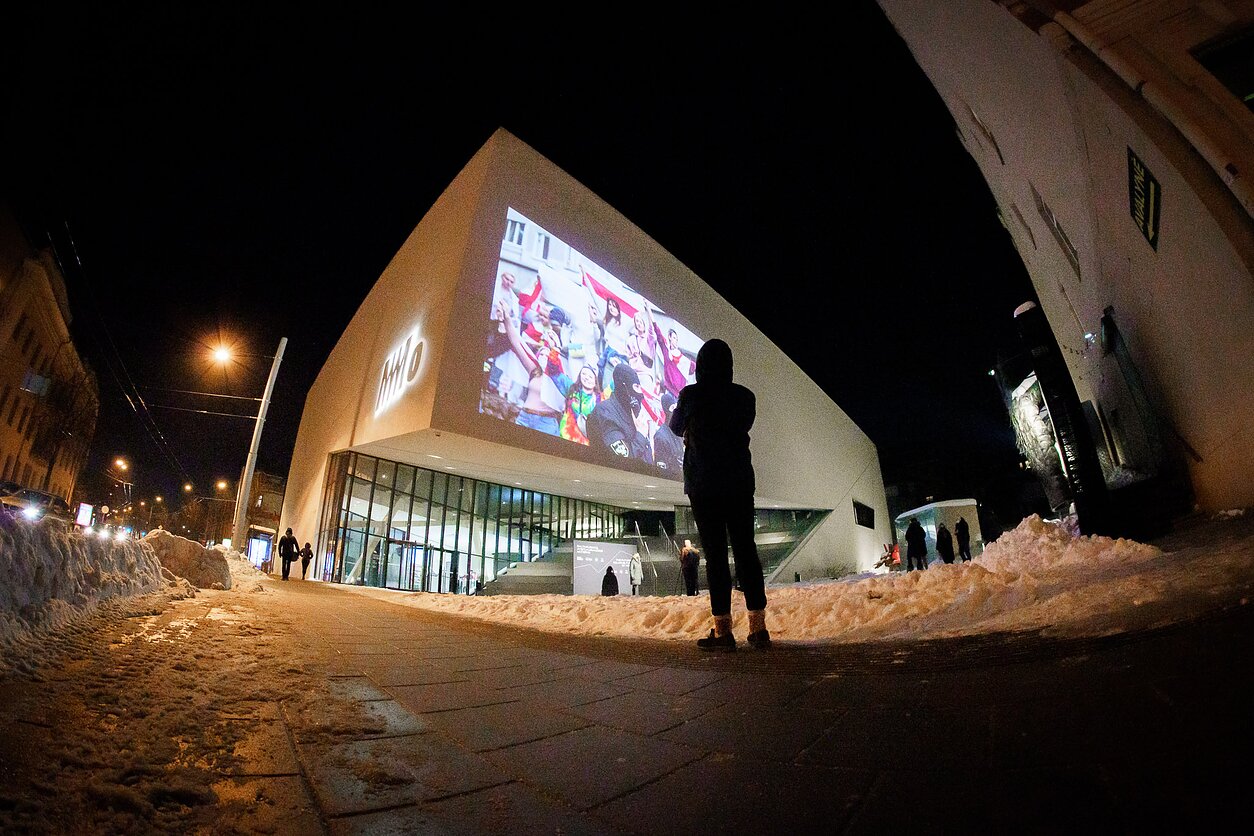 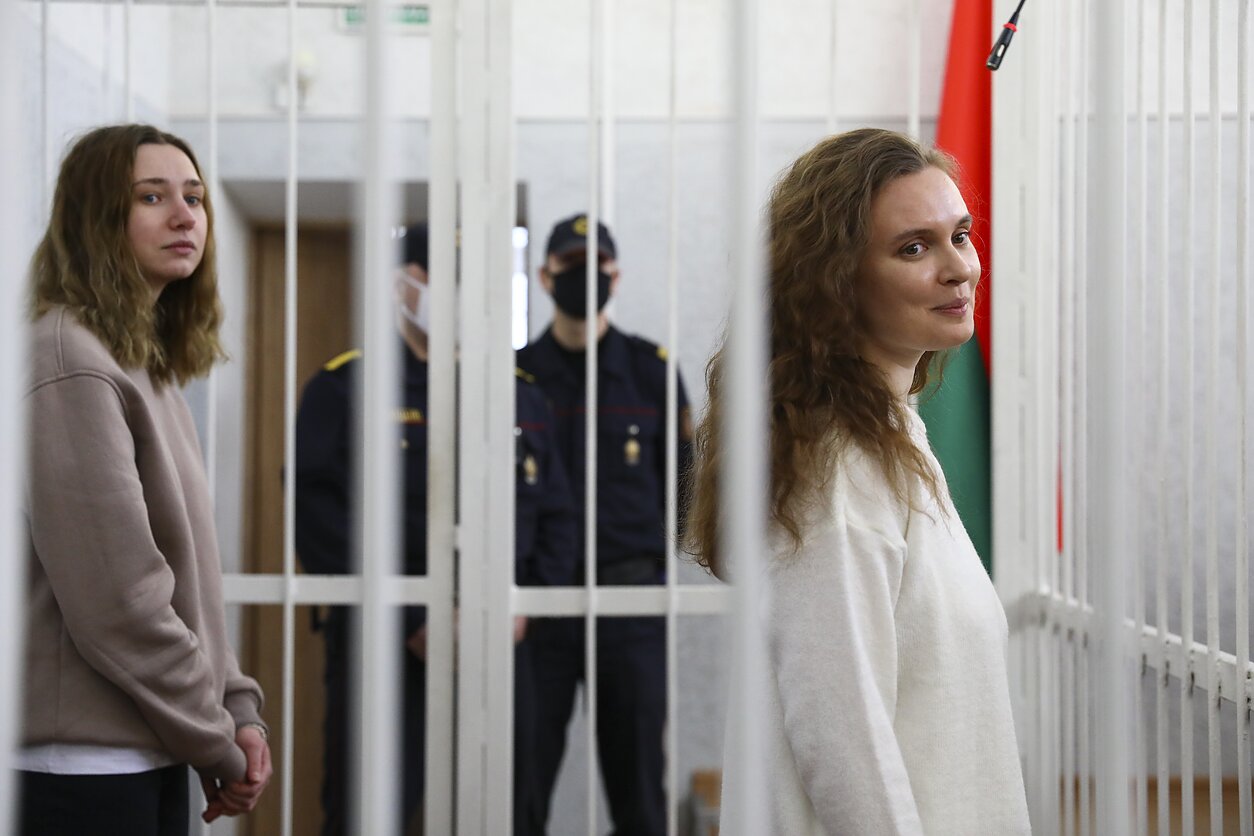 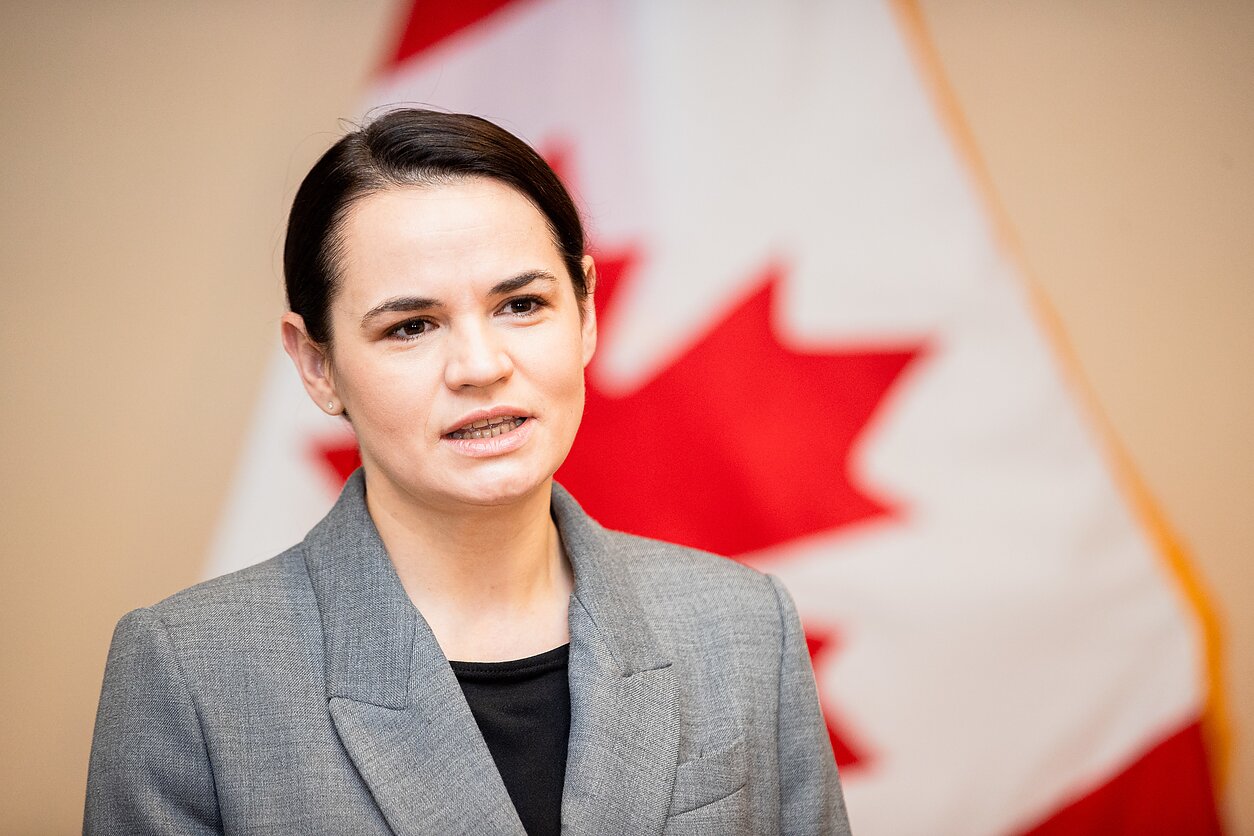 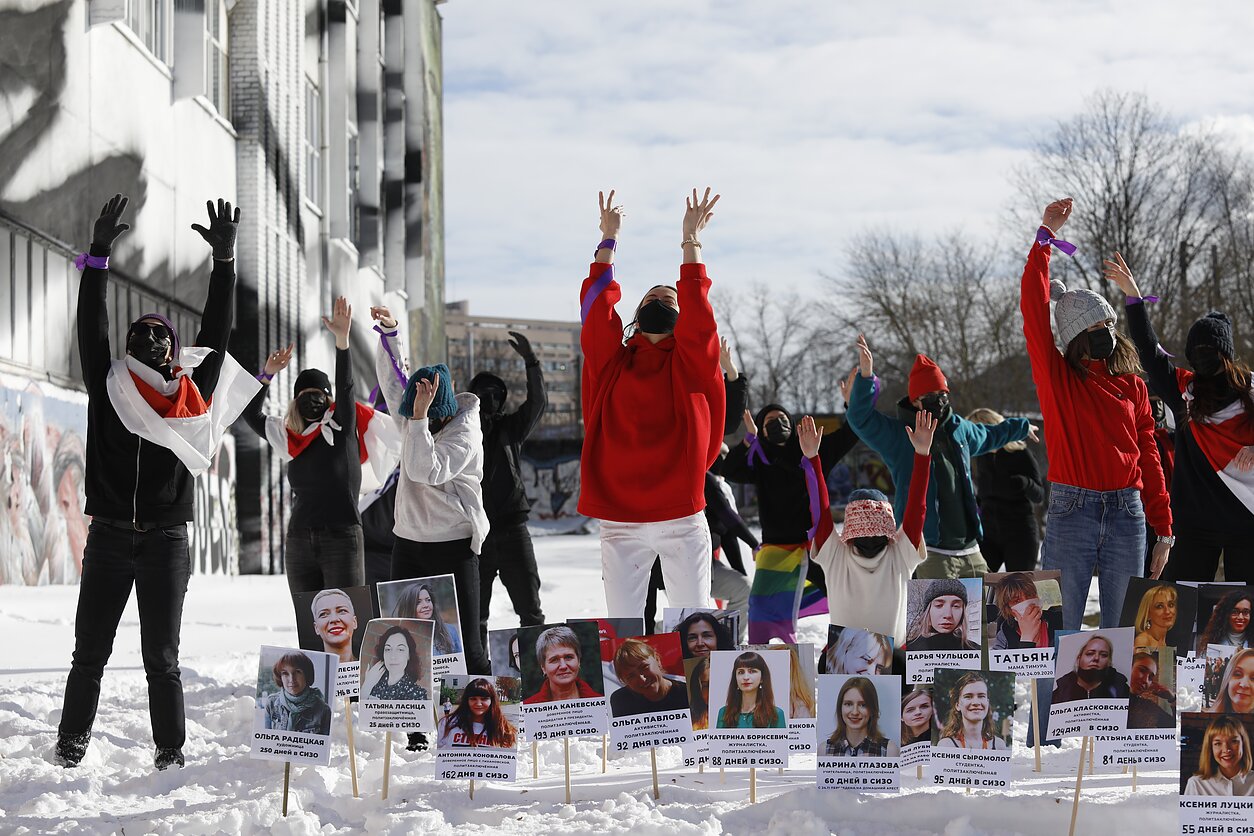 # Society# Culture# Baltics and the World