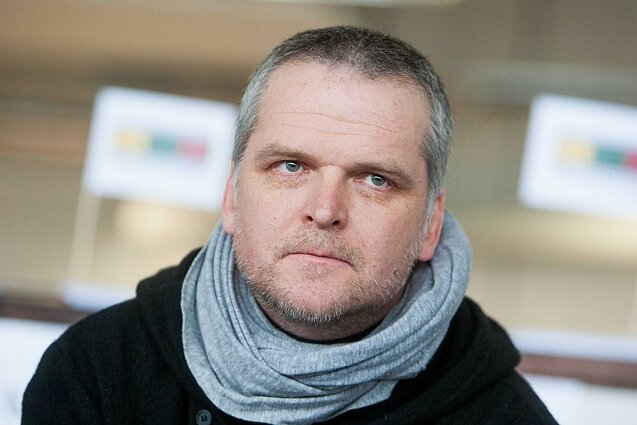 Lithuanian filmmaker Audrius Stonys is given a special treatment at the biggest Swiss documentary film festival Visions du Réel which is screening a retrospective of 18 films by Stonys.

Lithuanian filmmaker Audrius Stonys is given a special treatment at the biggest Swiss documentary film festival Visions du Réel which is screening a retrospective of 18 films by Stonys.

Your films continue the Lithuanian poetic documentary tradition. How would you describe your relationship with this tradition?

The relationship with the national poetic documentary mode is undeniable. The essence of poetic documentary does not lie in the poetic depiction of beautiful images, but rather in the attempt to cast a view on the other side of reality in the belief that in addition to fact, character and incident, there is some kind of space and it would be very interesting to see it.

It seems that nothing is happening in Šablevičius’ films; for example his Kelionė ūkų lankomis (Journey Through the Fields of Nebulas) depicts a man sitting by his cottage, railway workers replacing rails, and then a train travelling into the mist. Yet watching the film, one is thinking about lost values, human simplicity, and innocence.

Or, for example, in Šimtamečių godos (Dreams of Centenarians) by Robertas Verba, old people talk about their lives and that’s it. But behind their conversation is a huge layer of meaning.

Lithuanian poetic film is closely linked with black-and-white photography, and as a result it is very visual. We peer at a person’s face and try to read the story in it. It is true that today this kind of film is undergoing a transformation, becoming more sociable and communicative; there is much less silence and more action in it.

The award has made my life easier, but it did not destroy me. I was only 26 and all my life was before me, so it made no sense for me to stop and sit back. I wanted to search for untried means of expression and new themes.

My next film was Griuvėsių apaštalas (Apostle of Ruins), in which I rejected metaphors and used the Georgian language and colour, because I wanted to do something completely different from what I’d discovered in Earth of the Blind. My story was inspired by my acquaintance with Alexander Oboladze, a Georgian who had once been a party animal and a lover of restaurants, but suddenly became infinitely lonely.

The next film was Antigravitacija (Antigravity). Two years after the completion of Earth of the Blind, I still felt the impression that a man climbing a big chimney had made on me. I had a desire to share this feeling of losing breath at a high altitude. I am curious to see objects and phenomena that are right by our sides and yet are often unnoticeable.

I have never sought global recognition, and for this reason I accepted the Felix as an unexpected quirk. When I found out about the nomination, I thought, “Ah well, perhaps they’ll invite me to Berlin!” That was all I expected.

How did the three seemingly unrelated stories of the Earth of the Blind come together – a cow on its way to a slaughterhouse, blind people, and a person happily racing down the slope in a wheelchair?

These rather literary stories were my inventions. Later, they were transformed, leaving just reflections… I knew that such things did exist – I had followed a blind person in a wheelchair, I had spent a lot of time with a blind woman living in a small hut…

Together with the cameraman Rimvydas Leipus we let ourselves loose and gave way to intuition. We did not ask each other about the purpose or the meaning or the application of the material. We were both discovering cinematography at that time – watching everything with our eyes open, accepting what the environment had to offer. It is more difficult for me now sometimes, because I am aware of the entire film production process.

How does the cooperation with cameramen happen? They often appear to be, whether it is Rimvydas Leipus, Audrius Kemežys or Laisvūnas Karvelis, thinking in a similar vein as you.

In documentary filmmaking the input of a cameraman is altogether crucial. If you wish to achieve what you are dreaming of achieving, then during filming the director and the cameraman must understand each other without words. At this point other senses are activated. I strive towards a creative relationship. I understand that the outcome will largely depend on the cameraman’s approach and the “dialogue” between us. When I feel that there is an inner connection between us, we can get down to work. In a documentary, the cameraman is very independent, especially during filming.

How long does filming take? After all it is necessary to find a common language not only with the cameraman, but also with the characters at whom the camera is directed?

It depends. It took 14 days to shoot Raminas and two years to shoot Kenotafas (Cenotaph). The production of my current film, Moteris ir ledynas (The Woman and the Glacier), has also been taking quite a long while. It took two years to shoot Avinėlio vartus (Gates of the Lamb). Each film requires a different shooting time. One of the components of the film is establishing relations with the main character. Furthermore, there are many other things that influence the duration of the filmmaking process. Sometimes even mystical experiences are triggered when you feel that you can no longer shoot, that there’s something in the way, that there’s something you can’t find. A month or two or three pass and suddenly you realise that something had to be resolved inside yourself. You realise that had you not waited those three months, the film may not have appeared at all. It’s a kind of internal, yet palpable logic, but difficult to understand. We could have shot Cenotaph faster, but then the final scene where the soldiers remain unburied would have been lost, and the film would have had a different meaning. In a documentary film, you must obey a certain rhythm dictated by reality.

After the documentary Alone, in which a six-year-old girl is travelling to see her mother in prison, you said that you had faced ethical problems – questions of how close one can get to another person’s grief, and how moral making a documentary is in general.

The limit is different for everyone. I believe that television has long since stepped over this boundary, trampled it and even forgotten that it had ever existed. I haven’t discovered any specific formula, but I know that art cannot be made out of the pain of other people. Despite that film often looks at fallen people and relishes their misfortunes.

The film Ūkų ūkai emerged from a desire to expose the beauty industry, but in the course of shooting your attitude changed radically. Does it often happen that life adjusts preconceived visions?

Perhaps not a single one of my films was unaffected by this. The idea changes, because reality turns it upside down and destroys it. At first I was very frightened; it seemed to me that was it, that was the end. I had an idea and everything took another turn. Then I understood that this was supposed to be so. None of my films are as I originally conceived them. In Ūkų ūkai both the theme and the character changed. Instead of a strong, healthy, young man who goes swimming every day irrespective of whether it rains or snows, we have a tiny old woman tip-toeing across her room. Viena (Alone) was supposed to be about a girl who is going to visit her mother, who is in prison, and talking what she sees and feels, but instead I made a completely silent film. Tas, kurio nėra (New Martyrology) was supposed to show a man who died unbeknownst to anybody, but instead the Lithuanian film director Augustinas Baltrušaitis, whom fate and circumstances tossed into complete oblivion, became the protagonist of the film. When shooting Cenotaph it seemed that the film was about the meaning of reburial, but it turned out to be about meaninglessness. The initial concept is therefore diametrically opposite. When I was shooting Trys minutės po didžiojo sprogimo (Three Minutes after the Big Bang), it seemed that a simple person would say very profound truths, but it turned out that it was all the same to this man: he didn’t care a fig. So I had to look into the mirror. But this is just a natural thing in documentary filmmaking, the moment you think you know everything and it only remains to capture your “discoveries”, the truth of life takes over and turns against you. So, I let my visions be transformed. The essence lies in the quest. Subsequently, the films will live the lives of their own.

The film Gates of the Lamb speaks about baptism. What encouraged you to look into this topic?

The idea was offered by the Franciscan friar Gediminas from the Pakutuvėnai monastery. I was intrigued about a certain attitude towards baptism and the point that the Catholic faith should not be considered superior to others. On the contrary, we were trying to look into the meaning of baptism, to find archaic rituals that gave birth to it. After all, cinematography opens doors to the places where access is usually restricted, such as Orthodox or Protestant rites or biblical locations saturated with faith, prayer and mystery…

Do you believe that documentary film can offer insight into such categories as eternity, time, faith, memory, or passion?

These categories will never be truly understood, but sometimes we can get close to them. Filmmakers, such as Werner Herzog, are moving towards this step by step. Craving for the impossible is the deepest essence of cinematography. 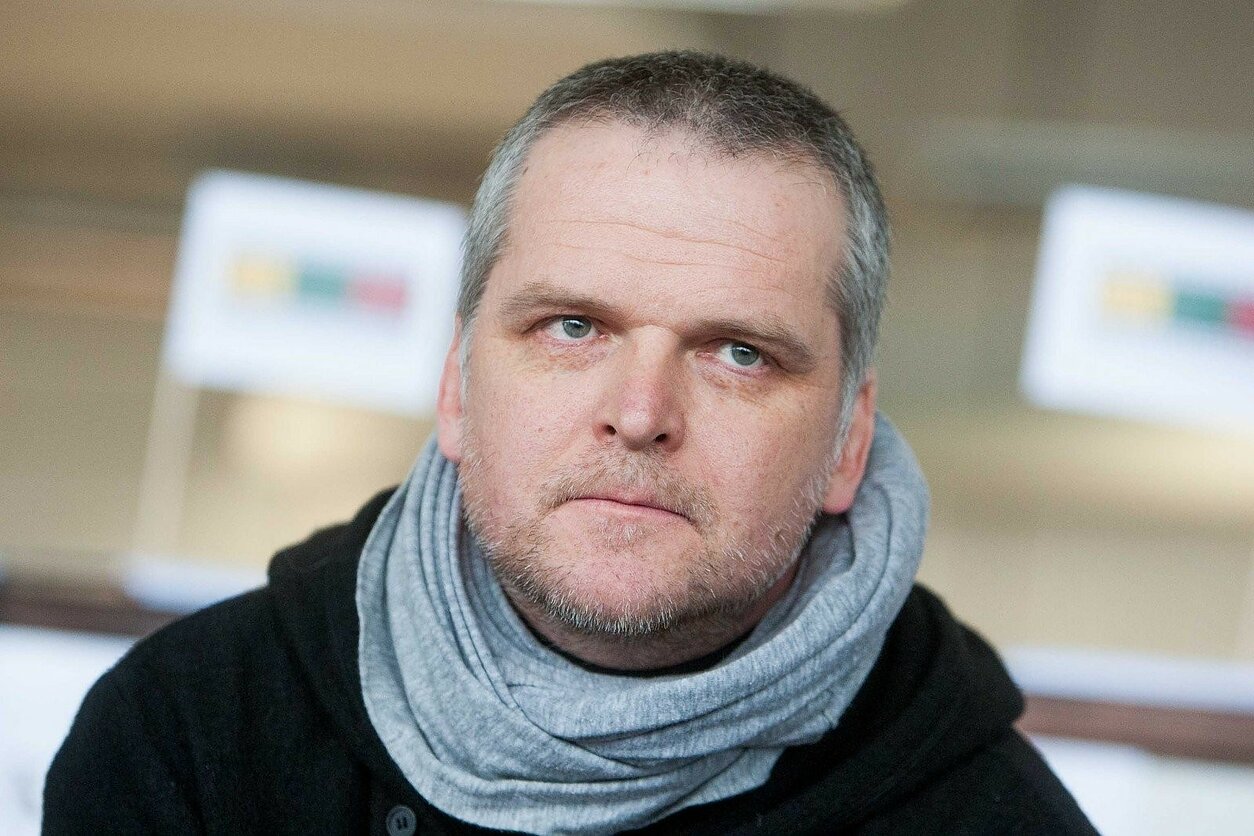