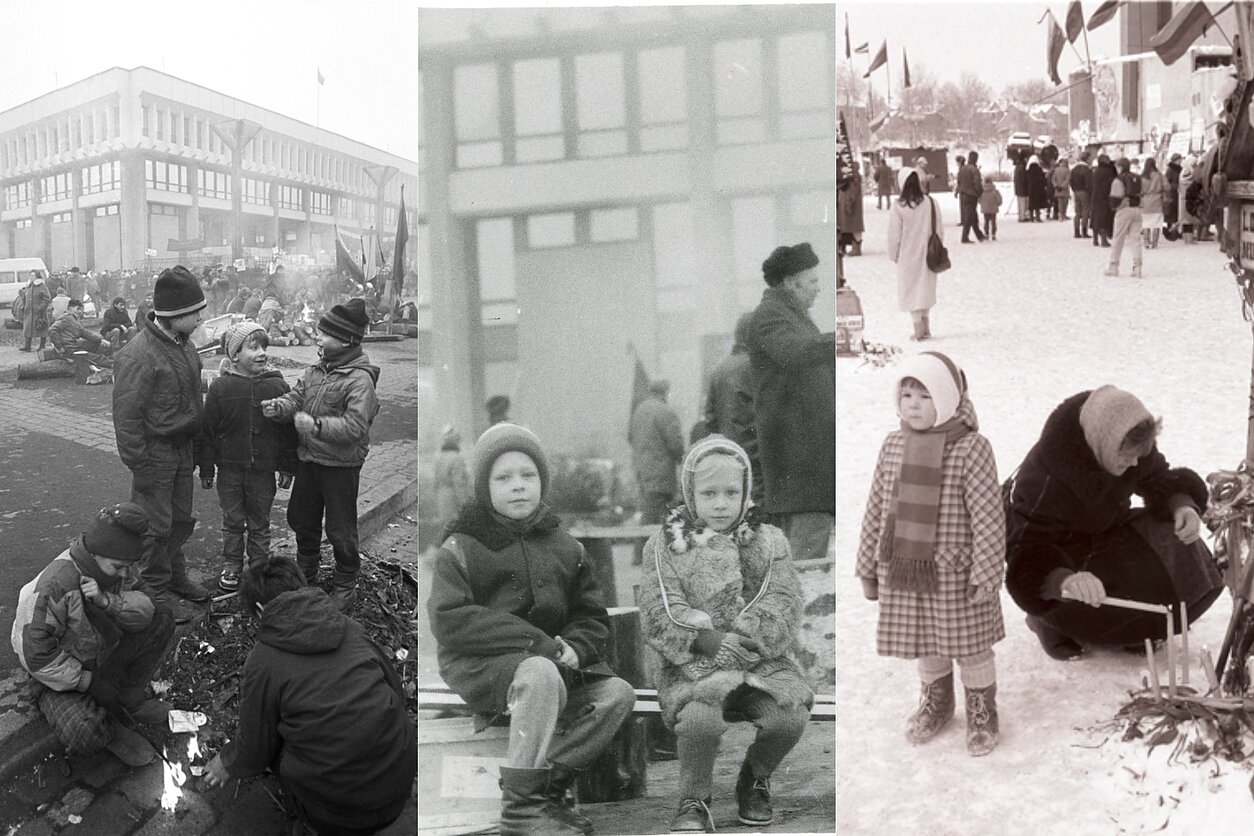 A new generation of Lithuanians has grown up since the country declared independence and defended it from Soviet troops 30 years ago. People who were kids in 1991 recall how they experienced the events of January 13 – and what it means to them today.

In January 1991, Monika Svėrytė was three and a half. Her family was then living just across the river from the Supreme Council building, one of the possible targets of the Soviet military.

“Equally close was the tension,” she recalls. “On the evening of January 13, my mum and I stayed at home, while my photographer dad went out to stand for freedom and to document the events.” 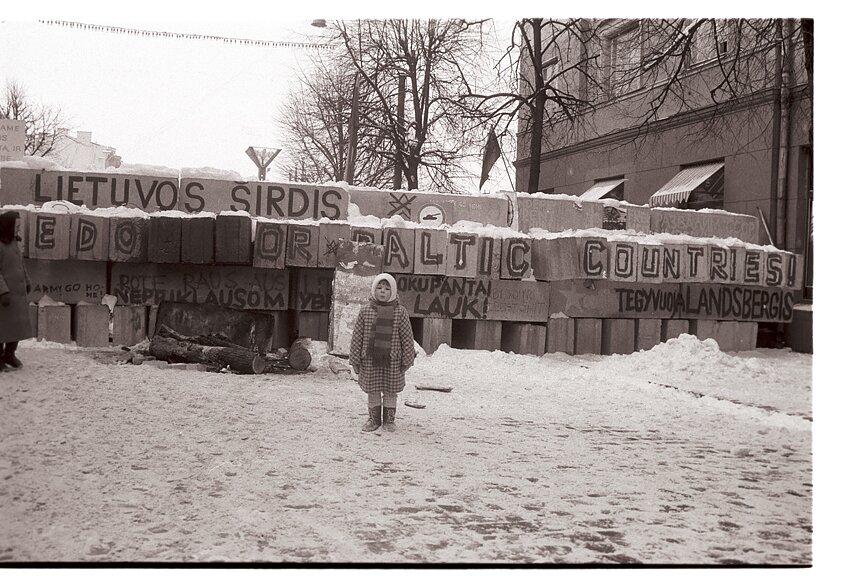 Monika Svėrytė and the barricades by the Supreme Council in 1991 / K. Svėrys

She remembers well how a window glass cracked from shockwaves. After live coverage of the events on TV was interrupted, her mum and neighbours would go outside every 30 minutes to look at what was happening by the parliament building.

“Loudspeakers were blasting instructions in different languages, sirens went off, we could hear shots, helicopters were flying over,” says Monika. “Mother best remembers hearing ‘Achtung, achtung’ in German, she thought a war had started.”

Her father returned home early the next morning. The family later went out to visit the hotspots of the previous night – the building of the Radio and TV Committee, where access was still blocked by military equipment, the TV tower,and the Supreme Council.

The mood was sombre. Debris was everywhere and the Soviet tanks were sill there. People looked sad and hurt, Monika says.

Later, she and her dad would walk to the Supreme Council building every day. “We looked around, as if to inspect that nothing had happened – perhaps so that we could be reassured.”

On January 16, Lithuania buried the 14 people who were killed on the night three days earlier. Monika also went to the public funeral. 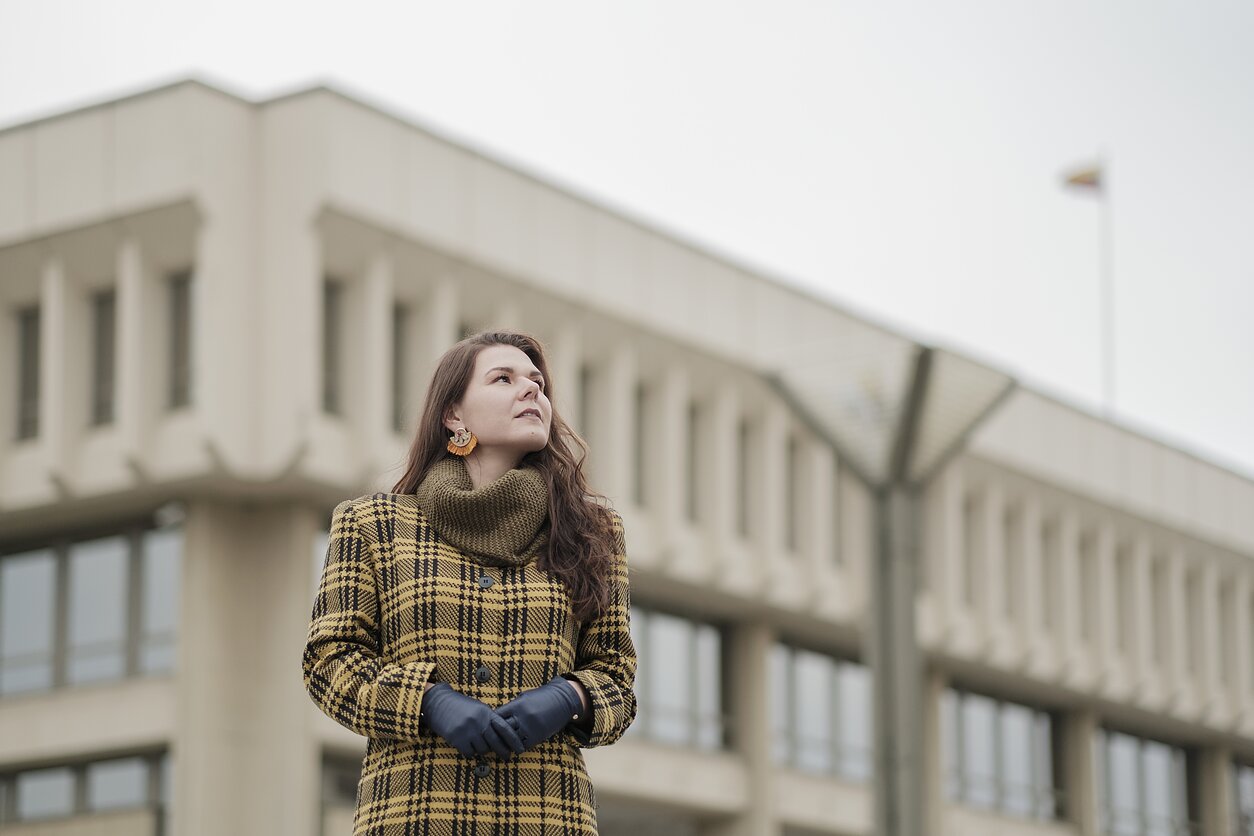 Even today, January 13 is an important date to her family, they commemorate it every year.

“It is all laid in layers in my memory, including patriotism. I thank my mum and dad for their example and fostering in me the love for my country.”

Siblings Arvydas and Vilma were among the youngest participants at the January 1991 rallies. Vilma Tumonienė (then Bakanauskaitė) was six.

“I remember very clearly that my dad was going to defend the TV tower,” she says. 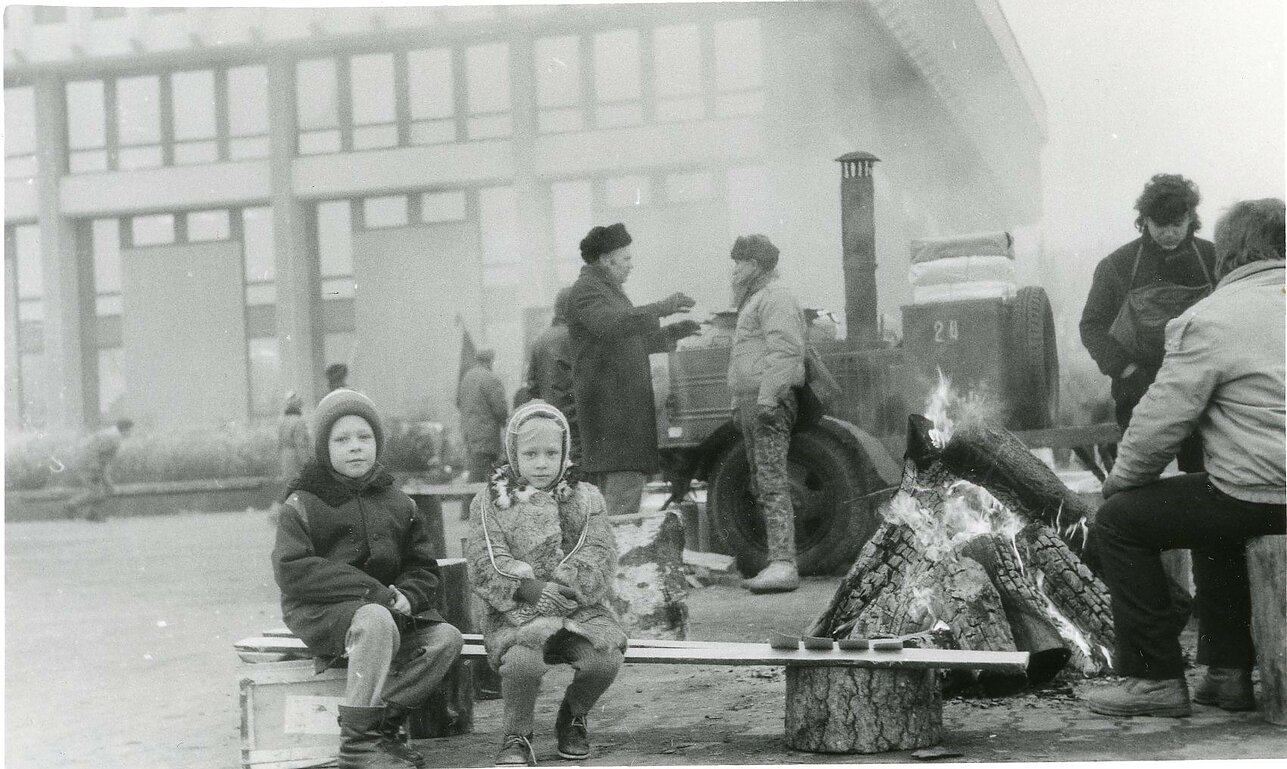 She had heard on the radio about things happening by the TV tower and so she didn't want her father to go. His preparations before leaving home seemed to last forever – Vilma eventually started urging him to go.

“And when he left and, it seemed, didn't come back for a long time, a child gets scared and feels guilty,” she recalls.

Dad eventually came back and tension subsided. When Vilma asked, what he saw by the TV tower, her dad made a joke: nothing serious happened, he just swung on a tank.

“As a small kid, I believed him – I thought of my dad as a superhero who could do that,” she smiles.

Her brother Arvydas Bakanauskas was seven at the time.

“I remember how we were listening to announcements on the radio – there was a sense that something was happening, change, unrest. But what exactly was changing, we as kids did not entirely understand,” Arvydas says. 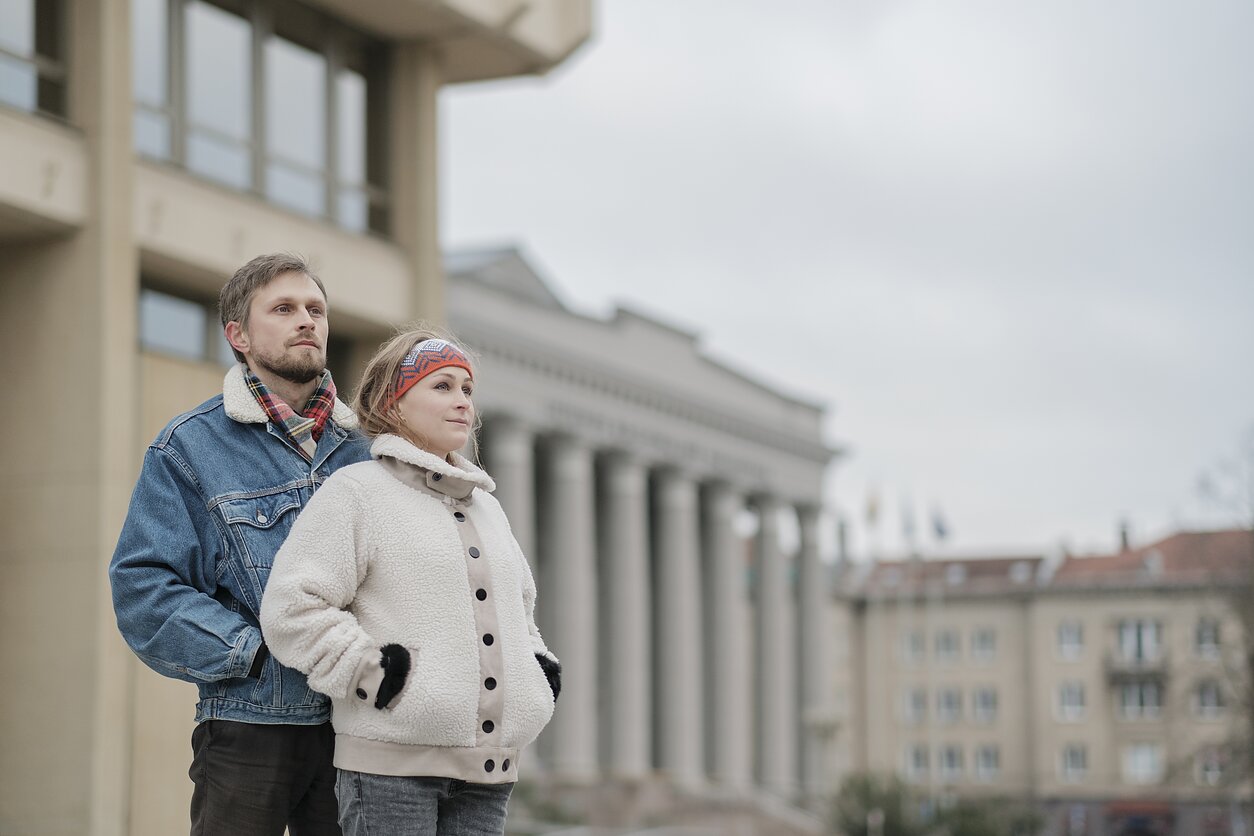 He remembers seeing tanks by the TV tower, walking to the Supreme Council, people, burning fires and barricade blocks plastered with photos.

What meaning January 13 carries for him today? “Liberation from oppression,” Arvydas says.

In 1991, Vainius Vaitiekūnas was 10. He lived near the Supreme Council and would often go out to play with other kids from the neighbourhood.

“We were not entirely street kids, but staying in the courtyard would get boring, so we'd go out to look for action. And the action was happening just several hundred metres away, so that's where we'd hang out,” he recalls. “We'd be climbing on barricades, be around the bonfires, walk by the Seimas.” 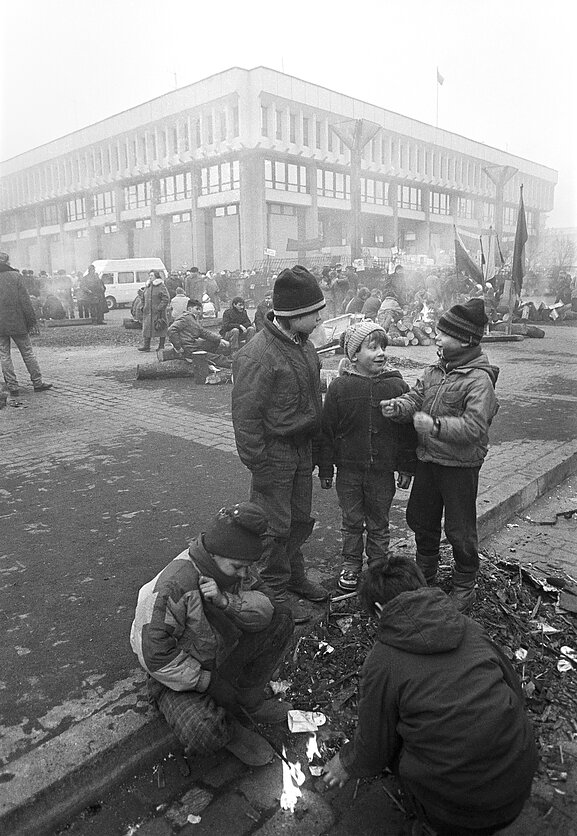 Vainius Vaitiekūnas (second on the left) with his friends playing near the Supreme Council (now Seimas) / R. Požerskis

He may not have understood the full meaning of what was happening, Vainius says, but he did have a sense it was transformational, if only from the masses of people crowding around the Supreme Council building. There hadn't been so many before, nor after.

Moreover, both his parents and teachers at school would explain Lithuania's striving for independence from the Soviet Union. “We knew what was happening and why. [...] No one knew what would happen, if we succeeded, but everyone had a common purpose,” he says.

On the night of January 13, Vainius' family was woken up by the sounds of shooting. His father got dressed and left for the Supreme Council and Vainius stayed at home with his mum and sister. No one could sleep, tension was palpable, he recalls. 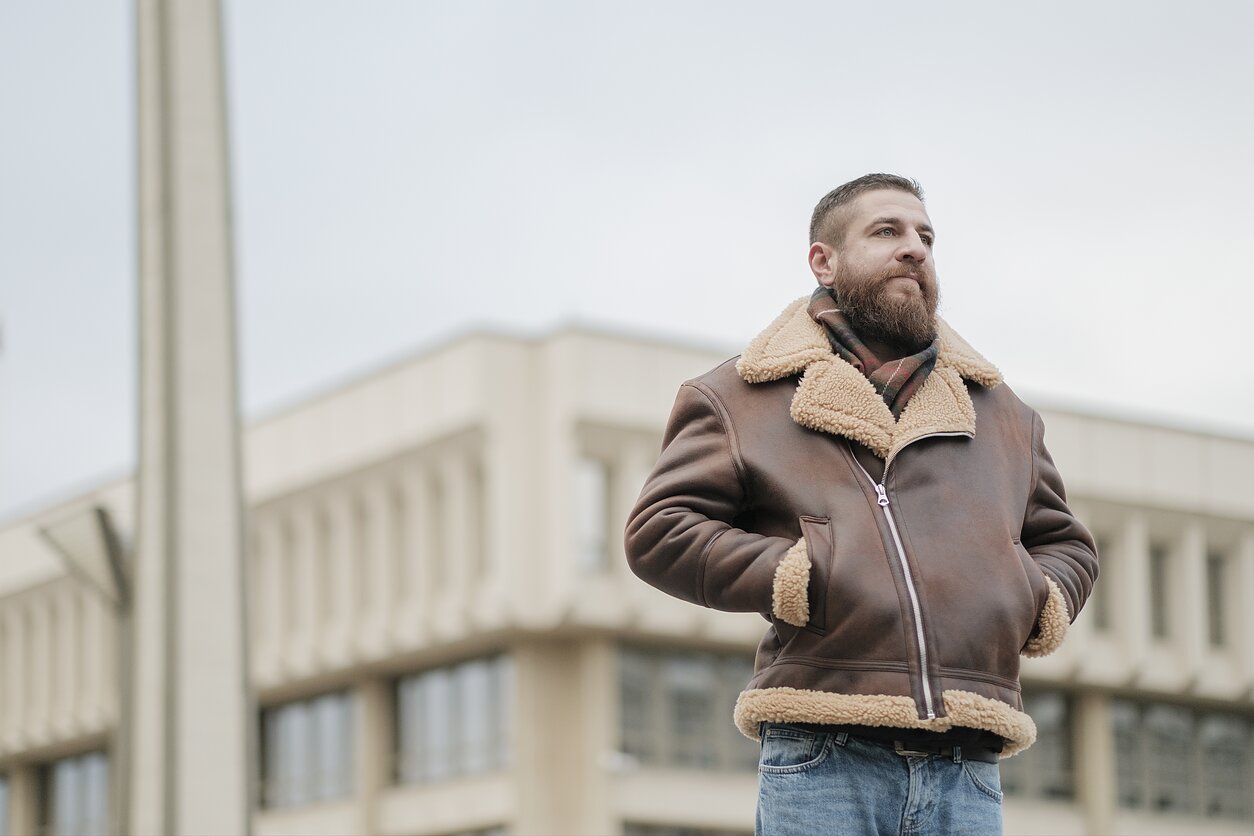 “It was scary, because you didn't understand what was happening – something's roaring and bellowing, shooting from the tanks must have been heard across Vilnius.”

Vainius remembers the events of January 13 every year as the night when the people stood together for a common purpose.