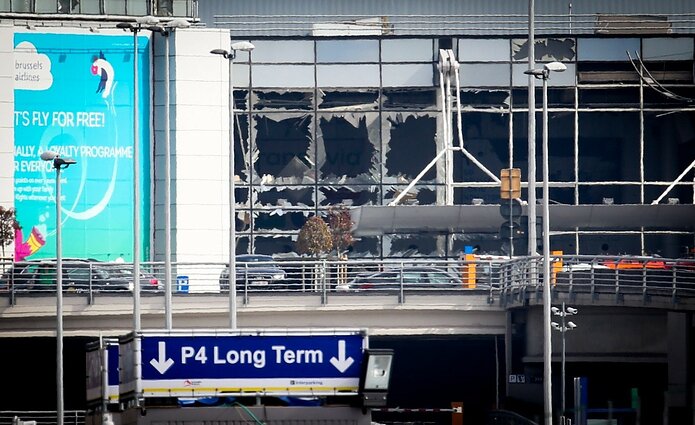 Belgium is observing three days of national mourning after the terrorist attacks that yesterday killed at least 34 people and injured over 200 in Brussels. Belgian police are continuing a manhunt for a suspected bomber caught on CCTV just before the explosions at Zaventem airport.

Belgium is observing three days of national mourning after the terrorist attacks that yesterday killed at least 34 people and injured over 200 in Brussels. Belgian police are continuing a manhunt for a suspected bomber caught on CCTV just before the explosions at Zaventem airport.

Three explosions hit Brussels airport and a central city subway station in what appears to have been a coordinated terrorist attack – there is still no information on possible Lithuanian casualties.

The so-called Islamic State has claimed responsibility for the attacks and has warned that more attacks would follow. The US State Department has issued a warning to US citizens travelling to Europe saying terrorist groups had plans for "near-term attacks throughout Europe, targeting sporting events, tourist sites, restaurants and transportation".

The Lithuanian Ambassador to Belgium told BNS he had no information yet as to whether any Lithuanians were injured or killed in the explosions.

The Lithuanian government and Prime Minister Algirdas Butkevicius are to meet today to consider calling a national day of mourning in sympathy with the victims of the attacks.

"We are looking into these matters, it's not easy. There's been a crisis center created and a special phone line will be opened, and we'll try to find out. At this stage, nobody can, of course, get into the airport. So probably, Belgian authorities will try to process that information centrally and then embassies will be able to get that information since really a lot of foreigners travel through Brussels Airport and I think all embassies are now really concerned about the same thing," said Gediminas Varvuolis, Lithuania's ambassador to Belgium. Reports now indicate that at least 14 people had been killed and over 80 injured in the attacks at the airport.

The Metro operator La Stib later confirmed that 15 people were killed and 55 wounded in another blast at the Maelbeek metro station. Now local media are reporting that 20 people were killed in the metro attack and over 100 injured.

Belgium's federal prosecutor, Fredere Van Leeuw, confirmed that the attack at Zaventem airport was carried out by a suicide bomber, writes Oliver Milne.

Belgian Prime Minister Charles Michel branded the attacks "blind, violent and cowardly" and a "tragic moment in our country's history".

"I would like to call on everyone to show calmness and solidarity", he said.

Lithuania’s President Dalia Grybauskaitė said Lithuania “stood in solidarity with all those affected” and condemned the “terrible acts of terrorism in Brussels”.

US President Barack Obama said: "The thoughts and prayers of the American people are with the people of Belgium."

"An explosion at an airport is always a horrible incident, really extraordinary. And the authorities' reaction will be extraordinary. Brussels, of course, has been through that period of fighting terrorism as one of the Paris attackers was recently detained. So, naturally, there are speculations that both things might be related. But these links will be determined by law enforcement. We are now waiting information from Belgian authorities," Varvuolis said.

Many foreigners travel through Brussels Airport which was rocked by two explosions this morning, and the bombing of the metro occurred at the Maelbeek stop, the key access point for people working in European institutions in Brussels.