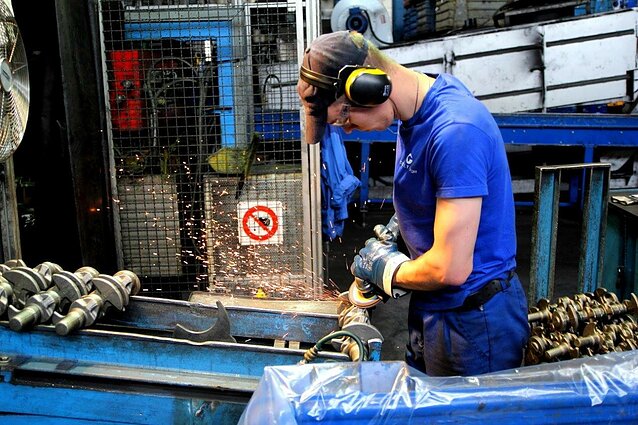 A €7.5 million investment in a brand new production line is set to boost jobs and productivity at CIE LT Forge, a Spanish-capital company based in Marijampolė. The new line will help CIE LT Forge to triple the production capacity of crankshafts that it intends to supply to Audi, Renault and Volkswagen. The company, part of the CIE Automotive Group, plans to recruit 60 new employees, 20 per cent of whom will be highly qualified vehicle engineering specialists, as a result of the new investment.

Lithuania’s Minister for the Economy, Evaldas Gustas, noted that companies like CIE LT Forge play a key role in the Lithuanian regions, both economically and socially. “Production companies that set up in these districts encourage young people who want to develop their careers to remain in Lithuania. The case of CIE LT Forge is unique in that it enables Marijampolė’s skilled automotive specialists to play a part in producing vehicles for Audi, Renault, Volkswagen and other world-famous brands,” the Minister stated.

CIE LT Forge is developing strongly as a company, with annual turnover at €16 million and a staff of more than 150. The new production line will triple the company’s output, up from 500,000 to 1.5 million crankshafts per year, when it comes online in 2019. And the quality of the crankshafts produced in the Marijampolė facility, which are more durable and efficient because they are forged rather than casted, has gained the company a client base of major European car producers.

When producing for such high-level clients, choosing the correct investment location is crucial, as Darius  Masionis, General Manager of CIE LT Forge, explains. “The shareholders were looking for the most suitable location to develop production capacity, and Lithuania met their needs the best. The decision to expand in Lithuania was also prompted by the country’s convenient geographical location, which enables us to easily reach our most important buyers, Europe’s major car producers. Furthermore, it offers an investment-friendly climate, plus skilled and experienced specialists. Invest Lithuania and the municipal administration of Marijampolė also made a considerable contribution to the implementation of this project,” said Mr Masionis.

In attracting this investment, Lithuania was chosen from a number of high-quality forging facilities belonging to CIE Automotive in Europe. According to Mantas Katinas, General Manager of Invest Lithuania, a foreign direct investment development agency, in order to continue competing with these countries and other industry leaders such as Hungary, Poland or the Czech Republic, more focus should be put on the education system and on the training of more qualified specialists in Lithuania.

“The attractiveness of the investment environment in the regions largely depends on whether local educational institutions train suitably qualified specialists for work in international manufacturing facilities. It is they who determine the distinctiveness and attractiveness of the region,” argues Mr Katinas. “CIE LT Forge, which has been operating in Marijampolė for a few years, is actively cooperating with the regional vocational training centre which prepares car mechanic specialists. The company goes on to employ some of the centre’s graduates. This example demonstrates that only through cooperation between educators and investors can good results be achieved,” Mr Katinas said.

For the town of Marijampolė, this new investment project is a major success story, with Mayor Vidmantas Brazys delighted that the municipality could play a role in facilitating it. “The Municipality of Marijampolė considers the attraction of investments one of its major goals,” the Mayor said. “That is why we granted CIE LT Forge a concession on its real estate tax worth €150,000 over a 5-year period. This decision helped to attract €7.5 million’s worth of investments into the town for the construction of the new production line and for the provision of 60 new jobs. In this way, the concession will be paid off in less than 4 years, with the economy of the whole municipality receiving a boost,” pointed out Mr Brazys.