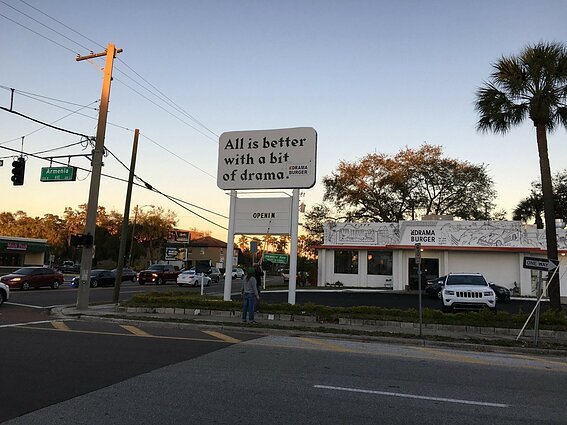 Lithuania’s Drama Burger has officially launched its first restaurant in the United States to sizzling reviews from the local media in Tampa, Florida.

Lithuania’s Drama Burger has officially launched its first restaurant in the United States to sizzling reviews from the local media in Tampa, Florida.

“While the hamburger is ubiquitous in the U.S., Drama Burger is shaking up the genre,” said the Tampa Bay Tribune.

“Just days after its soft opening, the grill at the gourmet burger restaurant on West Kennedy Boulevard is sizzling. Drama Burger is unique to Tampa, and actually the entire United States. The only other place you'll find it is 5,000 miles away in Lithuania,” said Tampa television station Fox News 13. The Tribune reported that one of Drama Burger’s early customers Casey Wisenbaker was really impressed on his inaugural visit.

“For the first weeks, Drama Burger’s most popular item, pastrami, will be served only on weekends. Chef Adomas Jagnoras marinates beef briskets for a week, cold smokes them for a few hours, then boils the beef for two days to achieve pastrami’s proper texture. Jagnoras also rolls beef, chicken, chorizo, salmon, portobello and lamb into the burgers,” reported the Tribune.

"We set our sights on the biggest challenge of them all: America. The burger motherland," owner Manfredas Bajelis told Fox. The restaurant officially launched last Friday and was planning to give away over 200 free burgers.

“We put crazy effort to perfect the level of quality that goes beyond the burger itself to the far corners of the menu, from buns to our condiments. Our grass-fed beef is always freshly minced; all the sauces and pickles are house made,” Bajelis told the Tampa Bay Tribune.

Drama burger also met with local brewers to find which beers from Florida could be paired with its burgers.

The new Drama Burger restaurant already has a rating of 4.9 out of 5 on Facebook reviews of the restaurant and has attracted nearly 1,400 likes in its short time in operation.