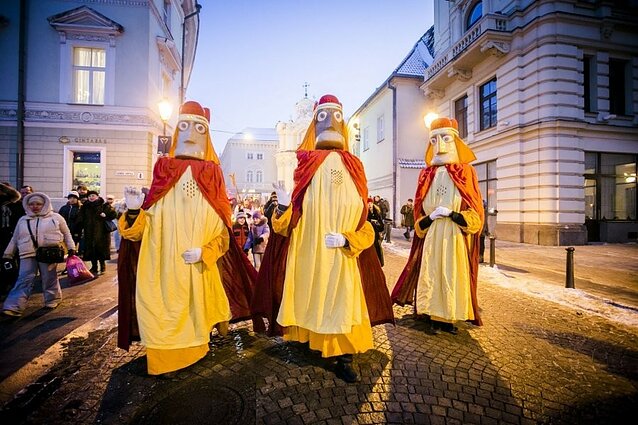 The annual Epiphany procession that made its way through Vilnius on Thursday was watched by passers-by and people who had come out especially for the occasion alike. With this procession the end of the Christmas festivities was celebrated.

The annual Epiphany procession that made its way through Vilnius on Thursday was watched by passers-by and people who had come out especially for the occasion alike. With this procession the end of the Christmas festivities was celebrated.

It was less cold than it had been the previous days, with the temperature halting at a mild 15° below zero. The procession was a sight you could not miss, with three meter tall, masked kings and angels followed by their posse walking through the medieval streets of Vilnius Old Town. Passers-by turned heads from under tightly wrapped scarves, a child hid behind her mum as the procession trotted by.

The procession, headed by three angels carrying the star of Bethlehem, further consisted of a few shepherds, cows, and soldiers. In the centre two women were swinging around torches. The group that started at the Gates of Dawn continued onto Cathedral Square. “Every year there is a different number of actors walking in the procession. The numbers go from 12 to 25, depending on how many actors work with us at that moment,” said Laima Ašakaitė, director at the Senamiestis Theatre.

People followed the group on all sides wearing thick coats. The sound of ringing bells carried by the actors in cow costumes filled the streets. One could only imagine the warmth of wearing one of these thick costumes; a comfortable cover for your whole body. “The costumes are indeed warm, except for the hand and feet, those are still cold,” said Ašakaitė.

The feast of Epiphany or Three Kings’ Day indicates the end of the twelve days of Christmas. This final day of Christmas comes with its own traditions, rituals and symbols. The 6th is the day when people take down their Christmas trees, which are then sometimes burned in a big bonfire. With Epiphany it is not only the end of Christmas that is celebrated, but also the journey of the Three Kings to the newborn Christ. The story goes these three kings, often called wise men, saw on the night when Christ was born a bright star light on the sky. They then followed this star to Bethlehem and there found the newborn. They presented the child with gold, frankincense and myrrh.

This was the 17th consecutive year the Three Kings’ Day procession made its way through the capital. “Since the first procession in Vilnius in 1999, it has always been our theatre that acted it out,” explained Ašakaitė.

Every country has its own way of celebrating and depicting the procession. Vilnius stands out with its elaborate and detailed costumes.

Ašakaitė: “The costumes are especially made by professional puppeteer artists for the play ‘Bethlehem’, which the theatre also performs, and the Three Kings procession. The costumes are really costly, and they were last updated previous year with funding from the Lithuanian Cultural Council.”

This year however, there was no funding from the council, so the Bethlehem show could not be performed. Nevertheless, the procession was, even despite the cold weather, watched with much delight. “A lot of people come to watch every year, although its always cold,” said Ašakaitė.

Later that same evening the procession gathered in the courtyard of Vilnius Teachers' House for the traditional ‘Farewell to the Christmas tree’ event. People were invited to bring their old trees and leave them in special containers. Collected trees and their branches will then be processed and made into environmentally friendly fuel. 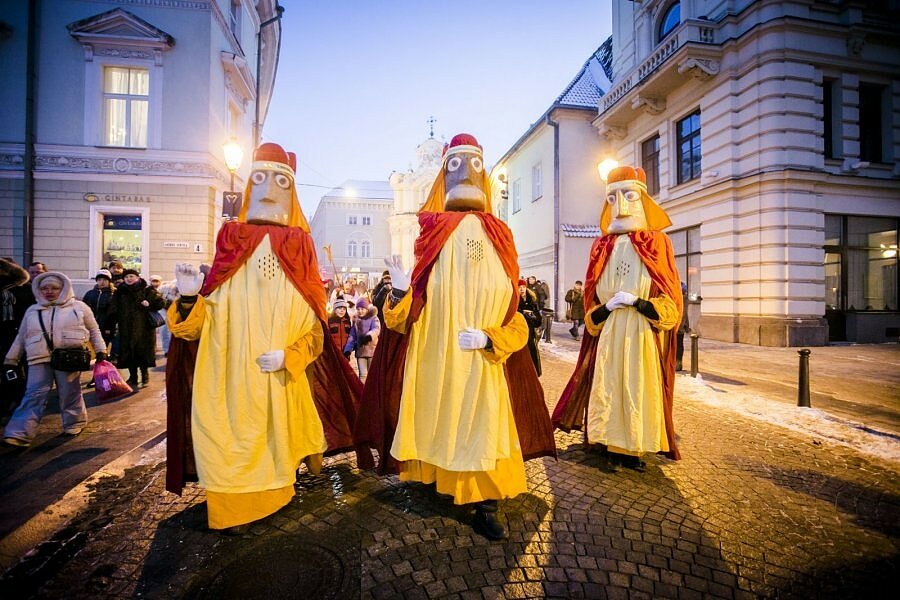