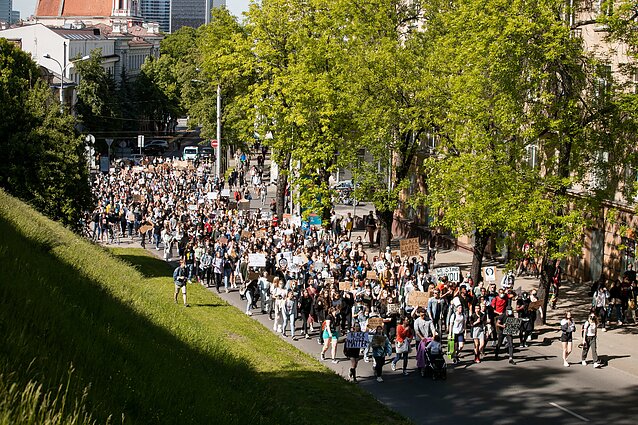 People in Vilnius march in support of US protests / D. Umbrasas/LRT

With colonial-era statues falling across Europe and the US igniting over racism, the wave of protests reached Lithuania. Although of a completely different scale, the rally in Vilnius caused no less controversy than its overseas peers.

The roughly 1,000 young people who attended the march were met with accusations by the older generation of stoking tensions and taking up causes foreign to Lithuania.

The police have opened an investigation over alleged public order offences due to a minor scuffle and, more controversially, swear words on posters directed at the police.

Meanwhile, far-right commentators online were quick to jump on the transatlantic bandwagon of claiming that Antifa, a left-wing anti-fascist movement, organised the rally. LRT FACTS spoke with the actual organisers of the event.

American expats in Lithuania told LRT English that being overseas did not make the issue any less personal, and said Lithuanians should also care.

Across the border in Belarus, independent candidates have been garnering support amid protests and increasing crackdown on dissent. Dzmitry Mitskevich looks at what’s what in the upcoming August 9 presidential election, and what it means for Belarus, Lithuania, and the EU.

Lithuania has decided to lift quarantine on June 17, ending three months of lockdown – or whatever was left of it. Many of the remaining restrictions will stay in place. Latvia, which survived the pandemic without a quarantine, has also lifted its state of emergency.

And as Estonia, Latvia, and Lithuania open up, more countries will be able to enter the so-called Baltic bubble. As of Monday, residents and citizens from 28 countries are able to arrive in Lithuania.

On the other hand, if you can’t leave, Vilnius is bringing foreign holidays to the Lithuanian capital.

OR CORONA BACK FOR MORE?

Although quarantine is soon to be lifted, the pandemic is not quite over. Lithuania confirmed 19 new cases on Thursday in a major spike of new infections. Most, however, were linked to two private parties near Vilnius that became clusters of infections. The country’s health minister warned against “rushing to party”.

Lithuania, meanwhile, is also sending some of its medics to help Armenia fight the pandemic.

Amid a standoff with Russia, Belarus has imported a first batch of US oil via Lithuania. According to Lithuania’s top diplomat, Linas Linkevičius, this marks a “significant shift” for Minsk as it seeks to reduce its energy dependence on Moscow.

Earlier this week, Washington announced intentions to reduce its decades-old military presence in Germany. In response, Warsaw said it would be happy to play ball and host some of the troops on Polish soil. Lithuanian Foreign Minister Linas Linkevičius welcomed the possibility of having more US soldiers next door – saying Poland and the Baltic states make up a single NATO region – and said the downsizing in Germany shouldn’t be “dramatised”.

Lithuania’s Economy Ministry proposed hosting more foreign tourists by compensating every third night of accommodation they spend in the country. This, the ministry says, will help the tourism sector recover after the pandemic.

And in another (restarted) tourism innovation, you can now take the river route aboard a ‘rocket’ to the Baltic Sea from Kaunas.

Lithuania’s ethics watchdog has dropped its corruption investigation into the paving of a street near the prime minister’s home. Saulius Skvernelis, the prime minister, welcomed the move, but the Lithuanian president said people will not be convinced.

People are returning to work, according to the country’s labour minister, and more workers are now being hired than fired. The Lithuanian government has also done a fine job handling the crisis so far, according to some, but trade unions are warning that negative effects are yet to come.

Lithuania has welcomed Brussels calling out China and Russia over their state-level disinformation, but said the bloc should have gone further.

– Craving šaltibarščiai? How about some quirky takes on the timeless classic – mixing it up with raspberry beer or shellfish? Find out more.

– LRT has launched an online project profiling the colourful lives of Lithuanians (and not only) around the world. In the first installment published on LRT English, we look at Lithuanian DJ and translator Eglė Naujokaitytė who thrives in Mexico City, but longs for the “deep spirit” of Lithuanian forests.

– Do you know the pipe (yes, that pipe) along the river Neris in Vilnius? There’s interesting history behind the artists who worked on the installation back in 2009.

– The iconic Vokiečių Street in the Lithuanian capital is due for an update. Here are the proposed designs. 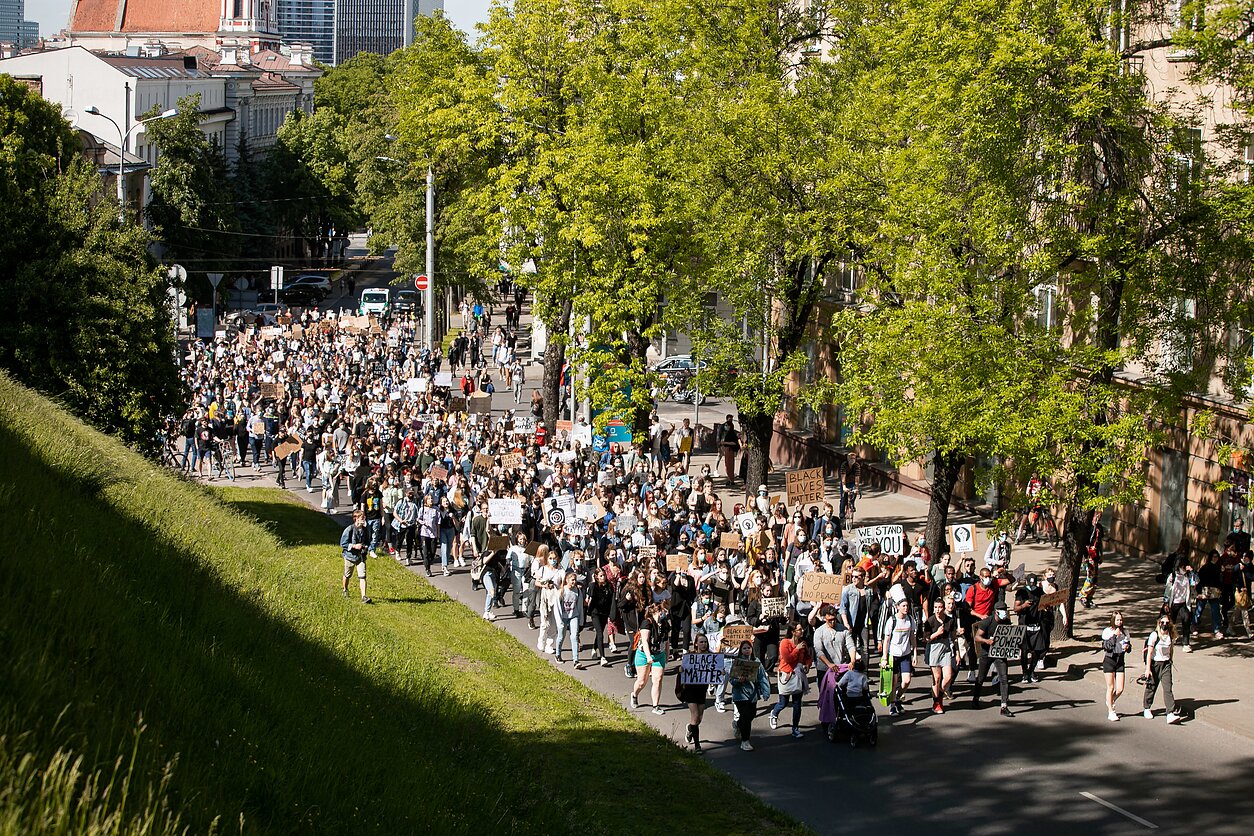 People in Vilnius march in support of US protests
1 / 1D. Umbrasas/LRT