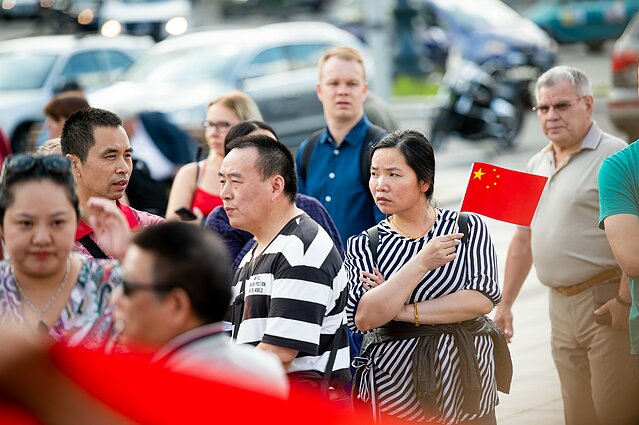 A counter-protest against a pro-Hong Kong rally in Vilnius last year. The incident, which saw involvement of the Chinese embassy staff, led to the Lithuanian Foreign Ministry handing a diplomatic note to Beijing. / E. Blaževič/LRT

Happy May Day, everyone. Despite calls to change the state holiday from May 1 to January 13 to commemorate the victims of Soviet aggression, Lithuania continues to have a day off on the International Workers’ Day. For now, at least.

In a bombshell interview with Delfi.lt, the Chinese ambassador to Lithuania, Shen Zhifei, said the novel coronavirus didn’t originate in Wuhan. Calls to support Taiwan were an “open provocation against one China policy,” he said. And since Lithuanian MPs signed the open letter calling for President Gitanas Nausėda to back Taiwan’s statehood and WHO membership, Zhifei said it constituted "official action" and “the Chinese government is firmly opposed”.

He also defended the actions of the “Chinese community” that staged a counter-protest against a pro-Hong Kong rally in Vilnius last year. The incident, which saw involvement of the Chinese embassy staff, led to the Lithuanian Foreign Ministry handing a diplomatic note to Beijing. The full interview is available at Delfi.lt (in Lithuanian).

FROM VILNIUS TO BEIJING

Šarūnas Liekis, the dean of the Faculty of Political Science and Diplomacy at Vytautas Magnus University (VDU), said Vilnius should respond to China’s pressure on Lithuanian politicians, media and think tanks by recognising Taiwan’s independence. Read the full op-ed here

FROM VILNIUS TO MINSK

After telling the Nausėda to deal with “your own virus,” Belarusian President Alexander Lukashenko has also shunned Lithuania’s offer to help deal with the Covid-19 crisis.

FROM VILNIUS TO RIGA

Latvia is increasingly being seen as the South Korea of Europe, or the Sweden of the Baltic states. Without enacting quarantine or harsh bans, it has seemingly kept the Covid-19 epidemic under control. Janis Rancans reports for LRT English from Riga.

In other news from Riga, Latvia has outlawed the display of Soviet and Nazi uniforms and symbols. The ban came in response to March 16 events, when some Latvians commemorate the country's SS unit, and yearly Soviet Victory Day celebrations on May 9, observed mostly by the country's Russian minority.

THE MOMENT WE’VE BEEN WAITING FOR

Lithuania is proceeding to ease quarantine restrictions. Outdoor bars, cafes, restaurants as well as most outdoor leisure activities have been allowed to resume. Some flights are due to restart in early May, while Estonia, Latvia and Lithuania could open their borders in mid-May.

Leaving Lithuania will no longer be prohibited from Monday. And while all outbound flights are allowed, flights arriving in Lithuania still need to be approved by the government.

Meanwhile Vilnius is taking a step further and is attempting to transform the Lithuanian capital into an open-air cafe. In a nutshell, businesses have been given the opportunity to set up in the city’s public spaces that have previously been off-limits – for example, the Cathedral Square.

Speaking of which, churches in Lithuania are set to resume services, except on Sundays.

But, break self-isolation rules after being diagnosed with Covid-19 and you could face up to a year in prison. To keep people safe and distant (physically), the Lithuanian police are stepping up patrols and employing drones to monitor the country during the long weekend.

Despite the loosening restrictions, quarantine is unlikely to be fully lifted on May 11, according to the country’s prime minister.

In some of the corona casualties, the famous and UNESCO-listed Song Festival has been cancelled. NATO unity, however, did not become victim to disinformation capitalising on the pandemic. Read the story here.

And as debates rage across the EU about defence spending in times of the corona, Lithuanian Defence Minister Raimundas Karoblis has called for military budgets not to become another casualty.

Also, as it turns out, Lithuania has seen one of the sharpest military spending increases in the EU.

Economy latest: the government proposes a new social welfare package, including 200-euro payouts to the unemployed and the pensioners. Meanwhile, the quarantine is costing the country’s social security some 2 million euros a day, and the Lithuanian tourism sector might need a whole year to recover.

Not delayed due to the crisis, however, Lithuania will start offering bike, bicycle, moped and scooter subsidies for anyone turning in their old cars.

WHAT THE BALTS DO IN QUARANTINE

Swedbank published spending trends during the pandemic in Estonia, Latvia and Lithuania. The results are curious – although Latvia kept bars and cafes open, the spending has dropped almost completely. Meanwhile, Lithuanians have been tackling their quarantine boredom with gambling.

A Lithuanian app is helping people access psychological and emotional support. Meanwhile, spending too much time on coronavirus news is like caring for a sick family member – it makes you unable to do much else, writes Agnė Kajackaitė, a behavioural economist at the Berlin Social Science Center research institute.

Social Democrats have quit the opposition over “political squabbling” and their outrage over zero-hour contract legislature proposals.

– As flight numbers plummeted, airfields and airports greeted drive-in cinemas and concerts in their place. Now you can watch cinema surrounded by groundlocked planes. Have a look.

– A 3D modelling project has revived the Great Synagogue of Vilna. Take a virtual tour here.

A counter-protest against a pro-Hong Kong rally in Vilnius last year. The incident, which saw involvement of the Chinese embassy staff, led to the Lithuanian Foreign Ministry handing a diplomatic note to Beijing.
1 / 1E. Blaževič/LRT