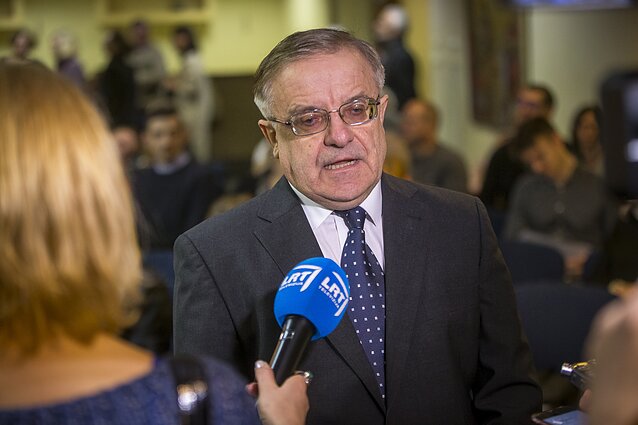 As Lithuania heads into a general election this year, a new right-wing party, headed by Vilnius University professor Vytautas Radžvilas, pledges to champion nationality and Christian values, but also integration into the EU.

The new party, called the National Association, was founded in Vilnius last Saturday.

The party's founders stress the importance of nationality and Christian values, while also saying they are in favour of deeper integration within the European Union.

The philosopher Vytautas Radžvilas, 62, was unanimously elected the new party's leader. The party will be registered once the Justice Ministry checks the party's founding document.

Last year, Radžvilas, who is a professor at Vilnius University's Faculty of Philosophy, ran for the European Parliament with a public election committed named after him and received 3.17 percent of the vote.

Philosopher Kęstutis Dubnikas and Vytautas Sinica, a political scientist and one of the founder of the nationalist youth organisation Pro Patria, were elected the new party's deputies.

The party's convention in Vilnius was attended by around 400 people, but its founders number around 2,300, Sinica told BNS.

Radžvilas has lectured at Vilnius University for the past several decades. He's a professor of the university's Faculty of Philosophy since 2018.

In all, there are 25 registered parties in Lithuania. The Christian Union, a party recently established by Rimantas Dagys, should be registered soon.

Lithuanian voters are hitting the polls in October to elect a new parliament.