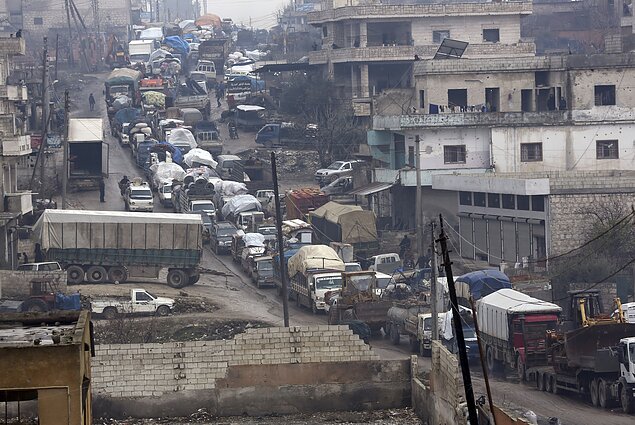 Syrians flee towards the Turkish border in advance of government forces in Idlib province, Syria. / AP

Lithuania was among 14 countries to sign an open letter calling on Russia and the Syrian regime to halt its offensive in rebel-held Idlib in northwestern Syria.

“Syrian regime with Russian support is continuing aggressive military action,” he said, adding that hundreds of thousands of people are enduring cold and hunger amid a high risk of an epidemic.

The regime is seeking “military victory at any cost,” he added. 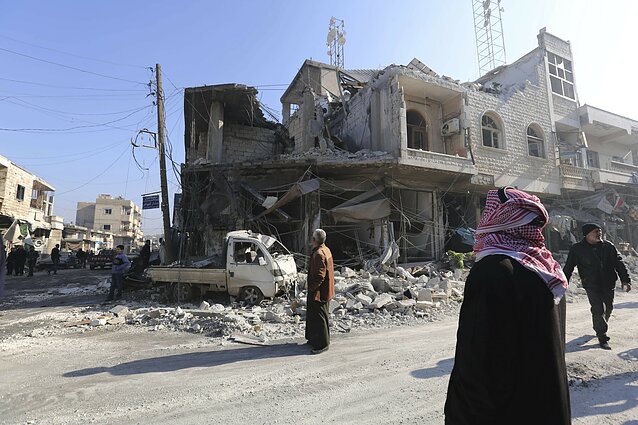 “In Idlib, a new humanitarian disaster is playing out, one of the worst in the Syrian crisis that, in nearly a decade, has caused too many such disasters to count. The Syrian regime continues its strategy of military reconquest of the country at any cost, regardless of the consequences for Syrian civilians.

Since December, its operations in the north-west have grown in intensity, with support from Russian aircraft. The unremitting air strikes and the dropping of barrel bombs have forced nearly one million Syrians to flee in just a few weeks.

Relief structures are saturated. Hundreds of thousands of people – mostly women and children – are seeking shelter in makeshift camps, and are subjected to cold, hunger and epidemics.

In defiance of international humanitarian law, the strikes deliberately targeted hospitals and health centres – and 79 were forced to shut down – schools, and shelters.

A total of 298 civilians have been killed in Idlib since 1 January, based on data from the OHCHR.

It is perfectly clear to us that there are radical groups in Idlib. We would never take terrorism lightly.

We are fighting terrorism with determination and are on the front lines of the fight against Daesh. But fighting terrorism cannot and must not justify massive violations of international humanitarian law, which we are witnessing every day in north-west Syria. 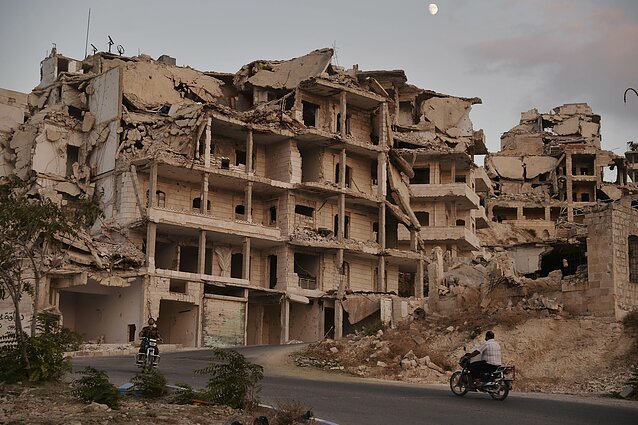 The United Nations has warned of the risk of an unprecedented humanitarian crisis if the current offensive continues. We call on the Syrian regime and its supporters to end this offensive and to resume the ceasefire established in autumn 2018. We call on them to immediately end hostilities and honour their obligations under international humanitarian law, including the protection of humanitarian workers and medical personnel, who have lost their lives because of their commitment to civilian populations in Idlib.

We also call on Russia to continue negotiations with Turkey in order to de-escalate the dire situation in Idlib and contribute to a political solution.

Beyond the urgency of a truce in Idlib, we call on Russia not to block the Security Council in the coming months from renewing the mechanism allowing for desperately needed cross-border humanitarian aid to be transported to north-west Syria; a mechanism it has already shut down in the north-east, where we now need to identify alternatives to the Al Yaroubiyah crossing.

Who can currently claim that the Syrian regime on its own accord will allow aid to reach those in need, when it bears the greatest responsibility for their situation?

Finally, it is important to remember that only a politically negotiated end to the conflict can serve as a durable conclusion to the Syrian crisis. Political normalisation cannot happen before a genuine, irreversible political process is firmly underway. 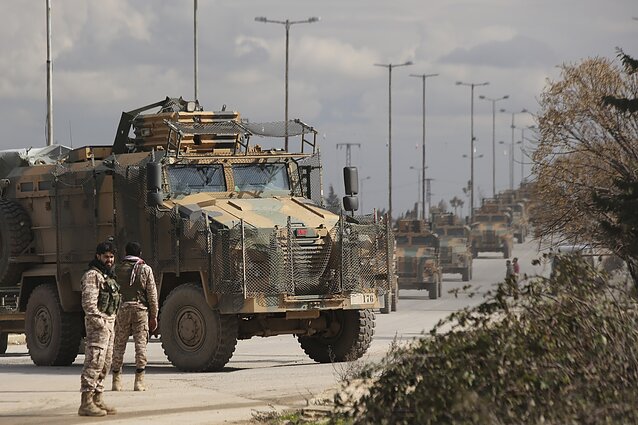 Focused on its military strategy, the regime seeks to undermine any type of inclusive political process, by blocking all constitutional discussions planned in Geneva under the aegis of UN Special Envoy Geir Pedersen. But the reconquest under way is an illusion and the same causes will produce the same effects: radicalization, instability in Syria and in the region, and exile, in a country where more than half the population is displaced or living as refugees.

We have to acknowledge the tremendous efforts Syria’s neighbours are undertaking to provide shelter to these Syrians that had to leave their homes.

In the face of the tragedy unfolding, Europeans, too, are shouldering their responsibilities.

From a humanitarian standpoint, the European Union and its Member States are the largest donors in support of the Syrian population. We will sustain and expand these collective efforts in reaction to the developing crisis in Idlib. 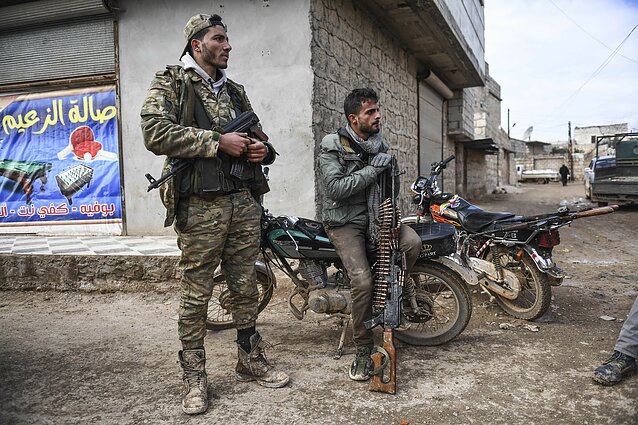 Europe continues to apply pressure on the regime to genuinely engage in the political process. On February 17, Europeans adopted fresh sanctions that target, on an individual basis, Syrian businesspersons who are fuelling the regime’s war efforts and benefiting from its impact.

It is also our responsibility to fight impunity with regard to the crimes committed in Syria.

It is a matter of principle and justice. It is also a necessary condition for sustainable peace, in a Syrian society that has been torn apart by nearly ten years of conflict.

We intend to continue to support the mechanisms to fight impunity that has been established by the United Nations, which conduct work to collect proof that will be vital in the preparation of future proceedings against those who are responsible for the most serious crimes: the Commission of Inquiry on the Syrian Arab Republic and the International, Impartial and Independent Mechanism.

We will also continue our work to refer cases to the International Criminal Court.

We will maintain our commitment, including within the framework of our national jurisdictions, to ensure that the crimes committed in Syria do not go unpunished. Such crimes have included the use of chemical weapons, breaching most fundamental norms of international law.

We need to establish responsibilities and we need accountability. And we need clarity on what happened to the many detainees and missing persons.” 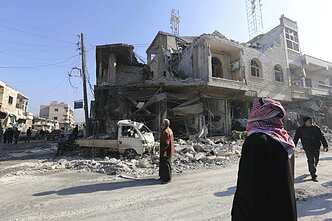 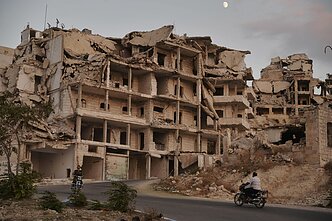 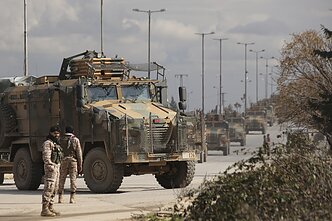 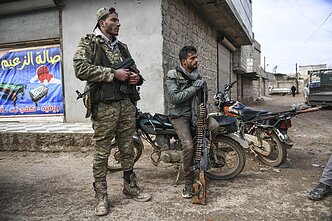 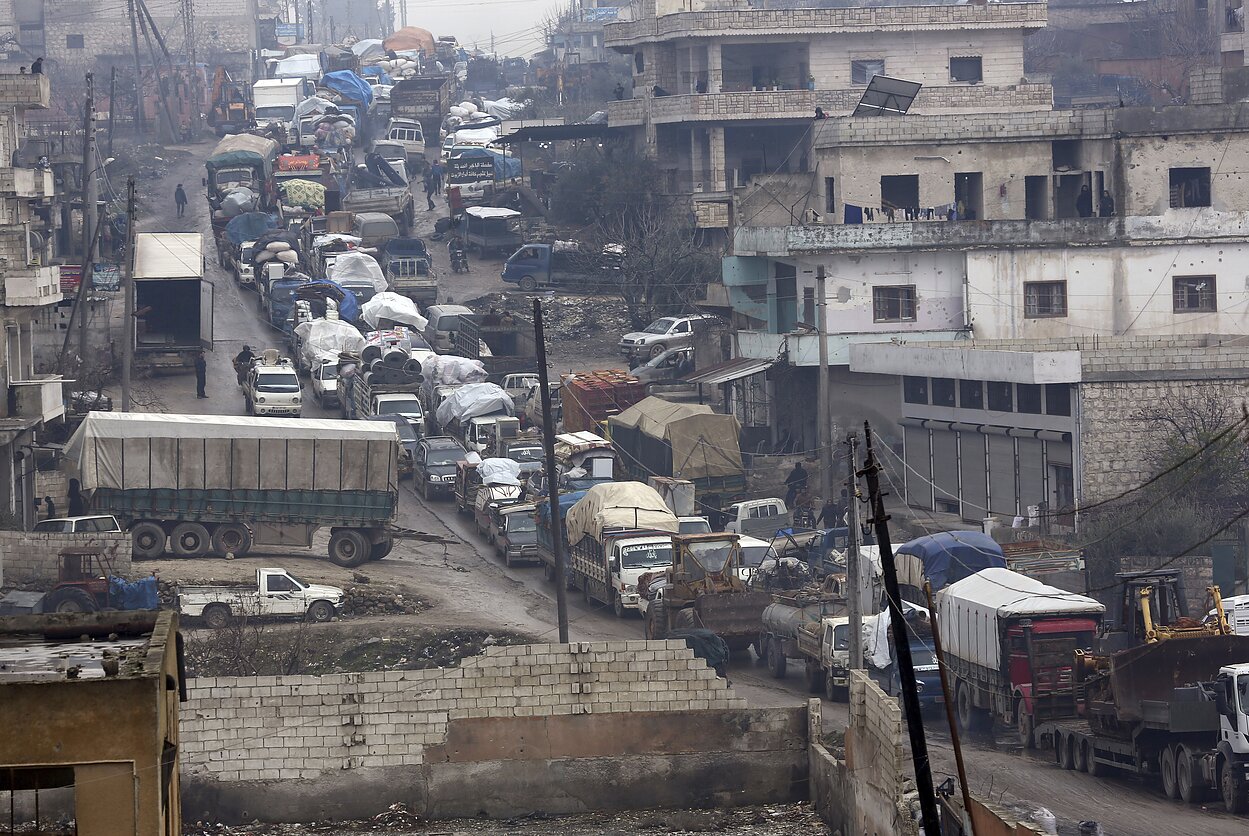 Syrians flee towards the Turkish border in advance of government forces in Idlib province, Syria.
1 / 5AP 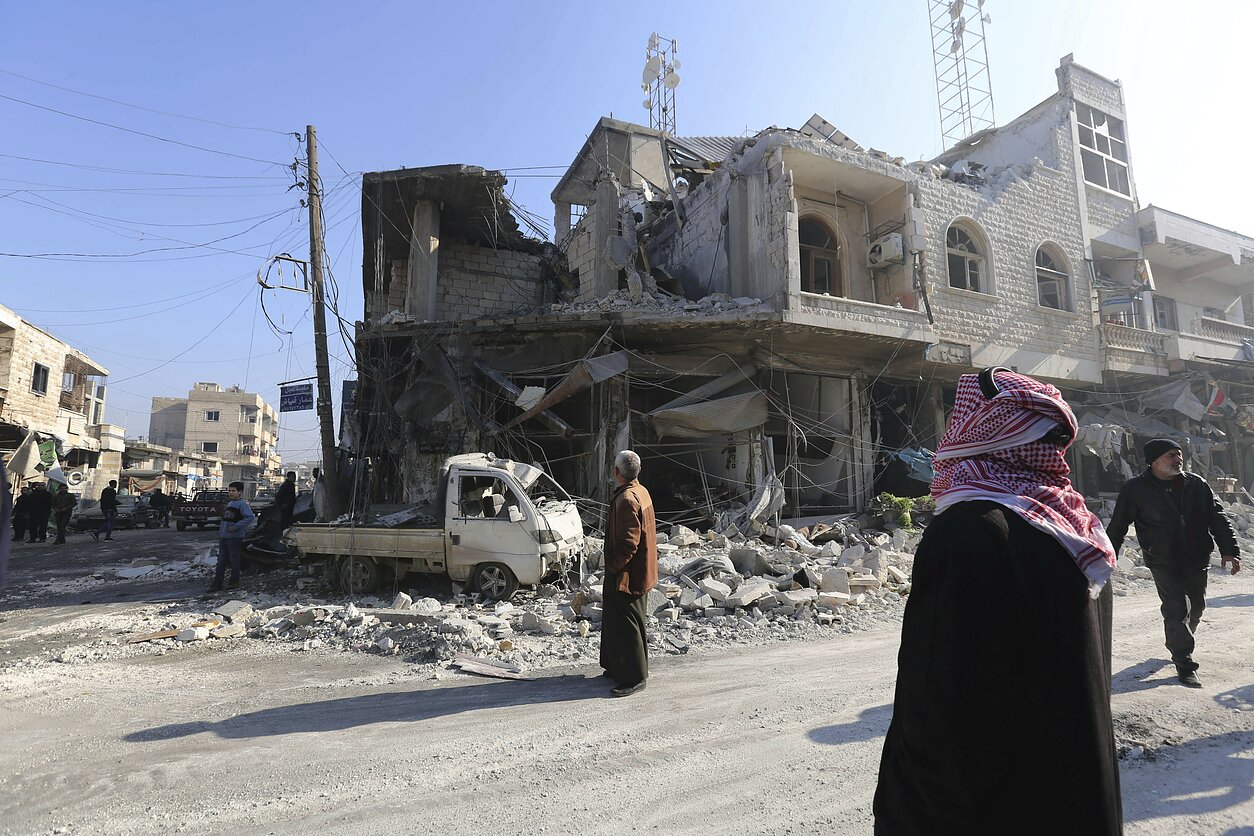 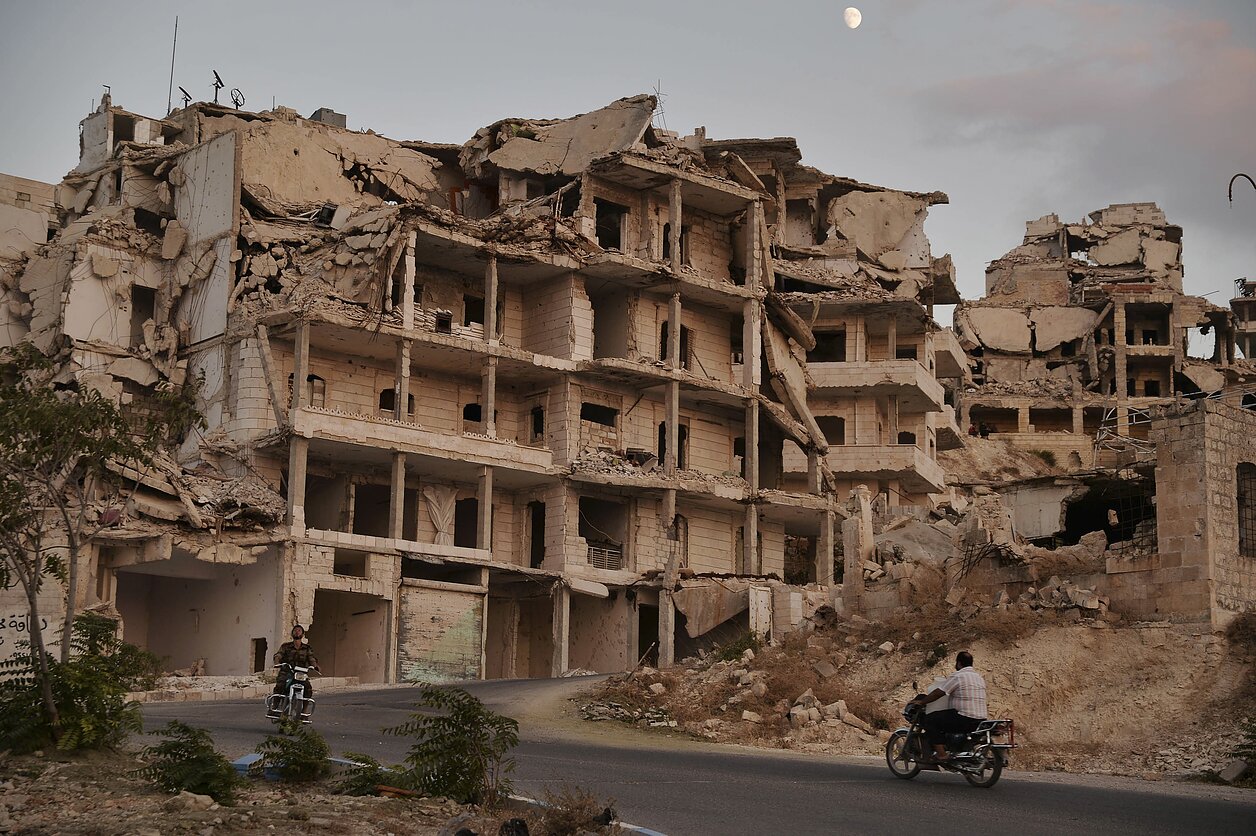 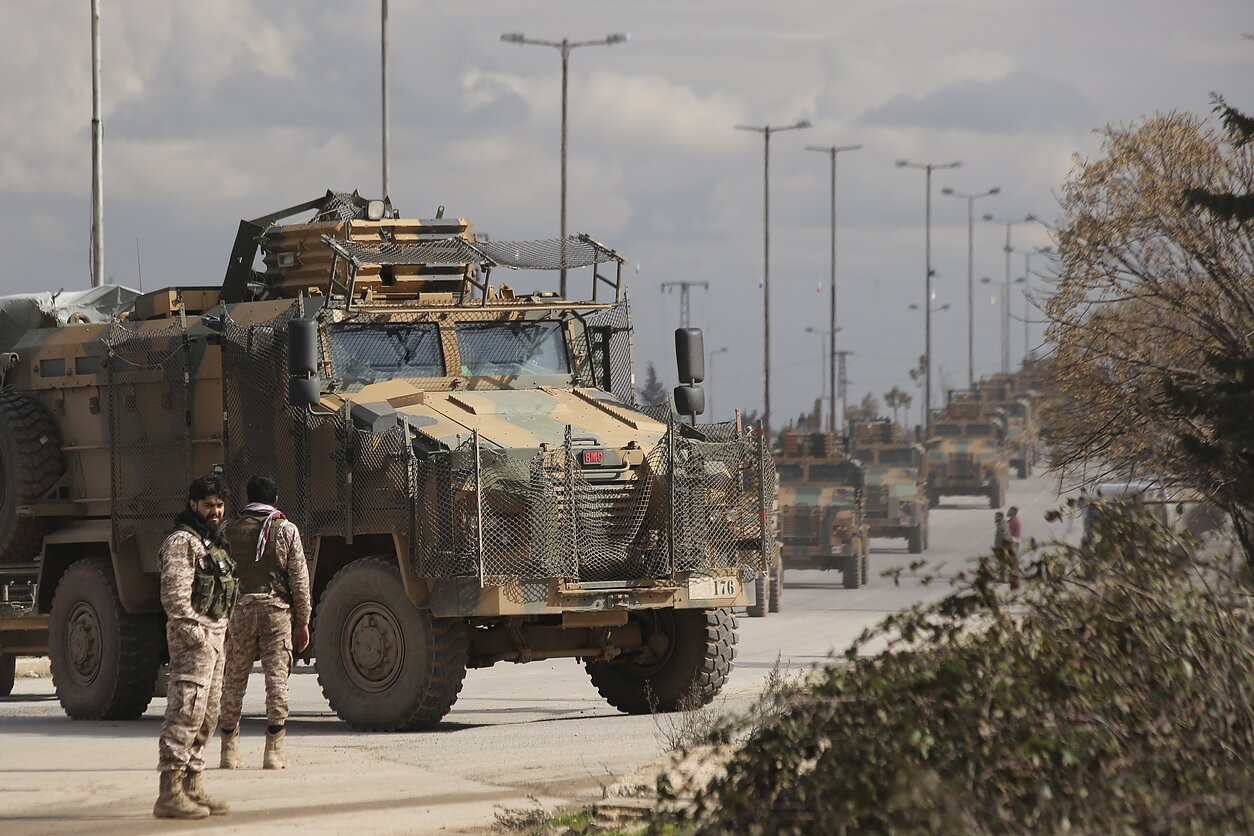 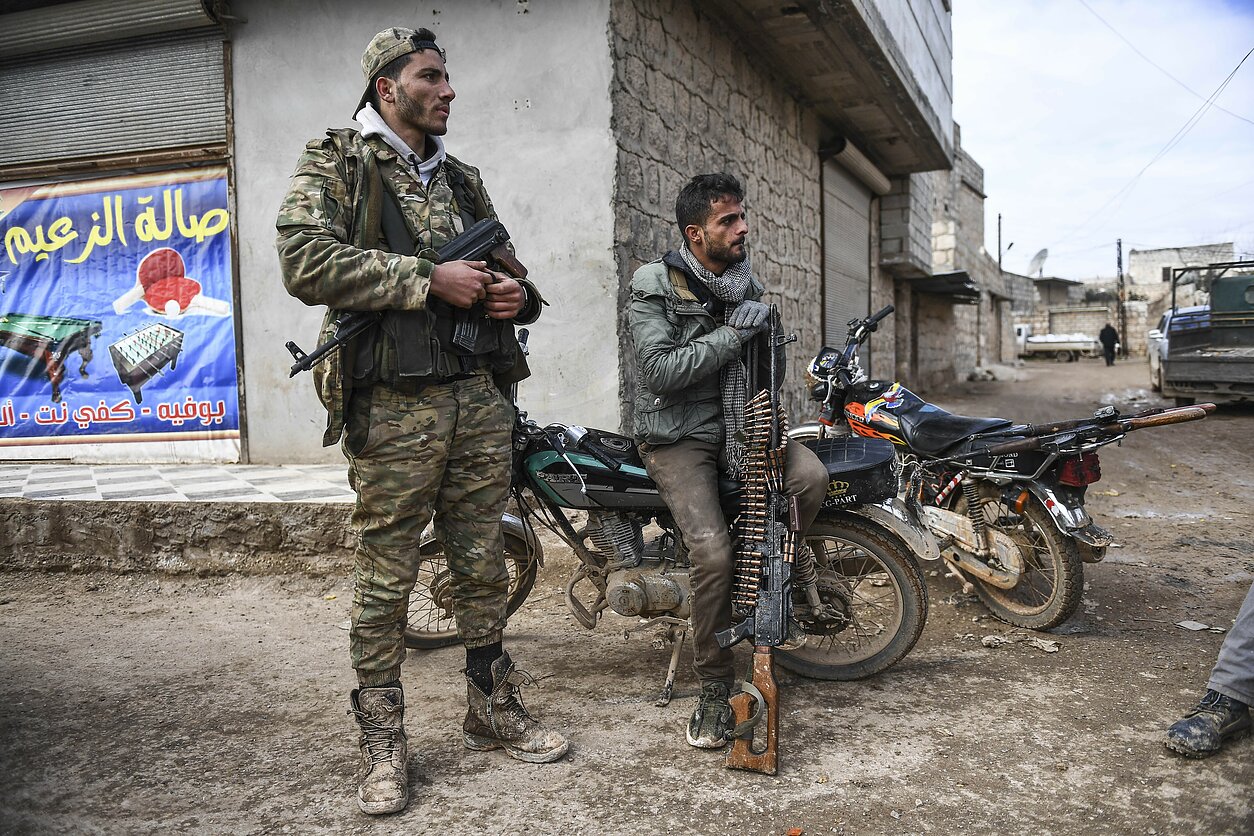