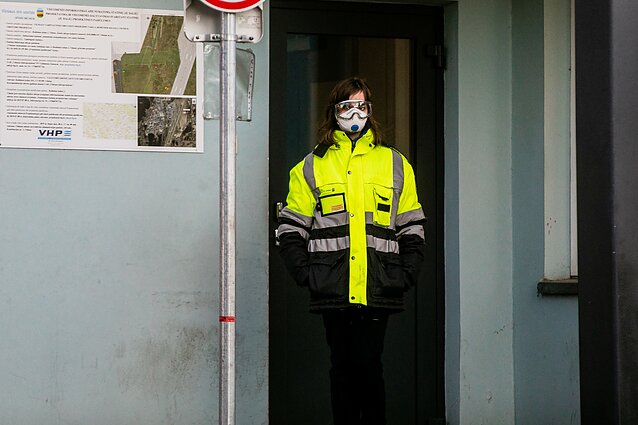 A plane from Warsaw carrying a passenger with suspected case of coronavirus landed in Vilnius on Thursday / J. Stacevičius/LRT

If you’ve recently been to Kaliningrad – pay attention. In the yearly threat assessment report, Lithuania’s intelligence agencies said that the Russian services are using free visas to recruit tourists. China, meanwhile, is targeting professionals with job offers on LinkedIn.

Apart from that, Russia did not seem to interfere in Lithuania’s recent elections too much, though it is still very much interested in the Baltic gas markets.

Far-right radicalism is a greater threat than terrorism in Lithuania, they said.

Responding to the report, the Chinese Embassy urged Lithuanian intelligence to “abandon Cold War mentality,” and said China is “the staunch supporter of cybersecurity”.

HOW DEADLY ARE LITHUANIA’S CITIES?

The deadliest in Europe, according to Fox News. Its ranking of European cities with the highest homicide rates gave the top three spots to Kaunas, Vilnius and Klaipėda.

Nonsense, Lithuania’s government rushed to react, pointing out inaccuracies in the report. The police said crime rates were falling and most homicides occured in domestic settings – so having a walk in Kaunas is as safe as it can be.

Meanwhile Vilnius, you may recall, would prefer to be known as the G-spot of Europe. The city’s new tourism campaign plays on the fact that foreigners still struggle to locate it.

CORONAVIRUS AT THE DOOR

As the virus ravages China, there are still no confirmed cases in Lithuania, although a dozen people have been tested.

The latest suspected case emerged on Thursday, from a plane that landed in Vilnius from Warsaw, though public health authorities almost immediately ruled out coronavirus.

Meanwhile, alarmed shoppers are depleting stocks of face masks and ill-intentioned actors are using the scare to spread disinformation: several online news outlets have been hacked to post fake stories about a US soldier infected with coronavirus in Lithuania.

As the EU is planning to slash cohesion funding for Lithuania and other eastern member states, there is a sense of alarm in Vilnius ahead of tough negotiations.

After the departure of Britain, a smaller pie is more difficult to split, says Lithuania’s ambassador in Brussels.

Britain is finally moving ahead with Brexit and Lithuanians in the UK say they are sick and tired of prolonged uncertainty, while British expats in Lithuania share their thoughts in the new instalment of #Voices.

The prime minister’s wife has a new job. And that’s a political piece of news because the job is with Orlen, the Polish oil group which has received some generous concessions from Prime Minister Skvernelis’s government. Skvernelis himself rejects suggestions he had anything to do with his wife’s employment – and the president seems to accept it.

WHO HAS BETTER GADGETS?

Remember how Czechs complained they were getting lower-quality food than Western Europeans? Lithuanians suspect the same may be true for consumer electronics – why else would your phone break down right after warranty expires? The Ministry of Justice plans to check if the myth has any substance.

Speaking of gadgets, LRT Investigation Team’s latest exposé traces Chinese cameras – that have been banned in the US – being used in a number of Lithuania’s institutions and even inside the cars of the country’s leaders.

From our partners: how the drama of Trump’s impeachment looks from the Ukrainian side. The storytelling keeps you hooked throughout.