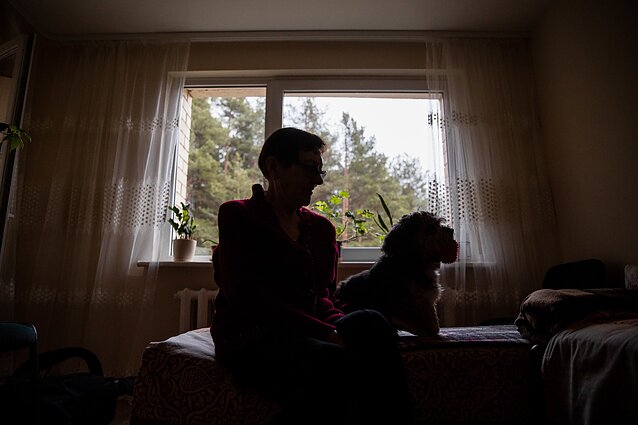 As population ages, providing adequate care and dignified life for the country's elderly is becoming a pressing issue in Lithuania. Homes for independent living may be an answer.

For the last 25 years, Nemira Budrikienė has been living in Fabijoniškės Social Service Home, a community for elderly living in Vilnius. The 73-year-old has a small apartment to herself and can lead a relatively independent life, although she receives as much help as she needs.

Budrikienė has diabetes and multiple sclerosis. A surgery has saved her eyesight, but she cannot do without assistance.

“Keeping the apartment in order, cleaning is up to the social workers. They do my washing,” says Budrikienė. 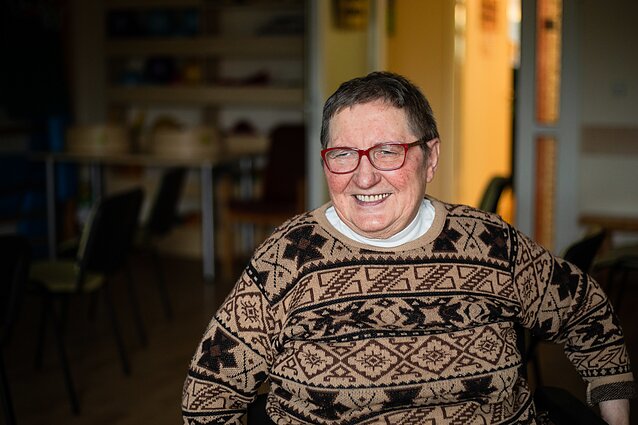 She was a manual labourer in her working life. Now, she has to rely on others for her personal hygiene. “When you have multiple sclerosis, it's quite unpredictable.”

Algimantė Jurgelevič is another resident at the Fabijoniškės home, where she lives with her faithful companion, a dog named Lord, itself of an advanced age of 17.

“It's fantastic here, there's a forest nearby, we can go for walks with my dog,” Jurgelevič says. “We have three favourite routes.”

She moved into the elderly living home a year ago. The woman can pursue her hobbies – decoupage, cooking, meeting friends – while social workers help her with housework.

“One does the washing, another helps with shopping, if I need something heavier brought,” Jurgelevič says. “If I ask, they wash the windows or turn on the vacuum cleaner.” 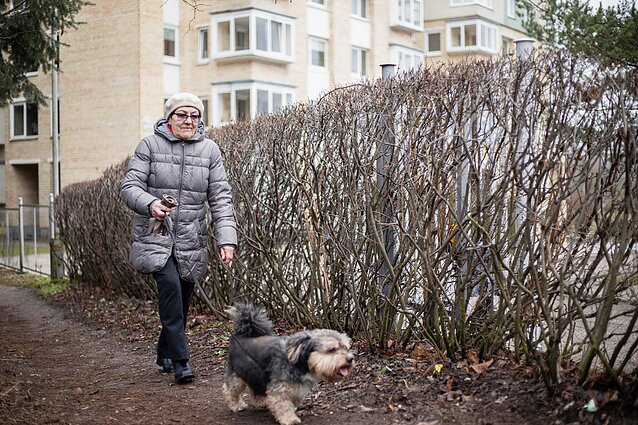 These homes accept senior residents who do not have any relatives to take care of them or own a home.

The fee for living here depends on the resident's income, explains Daiva Sadauskaitė who works with the elderly. Those living on less than 250 euros a month do not have to pay anything. Residents who get between 250 and 375 euros pay 10 percent of their income, while those making more give 20 percent.

The average monthly old-age pension in Lithuania stands at 377 euros.

Living in the home entitles the residents to social workers' assistance, but they have to pay for food, utilities and other services themselves. 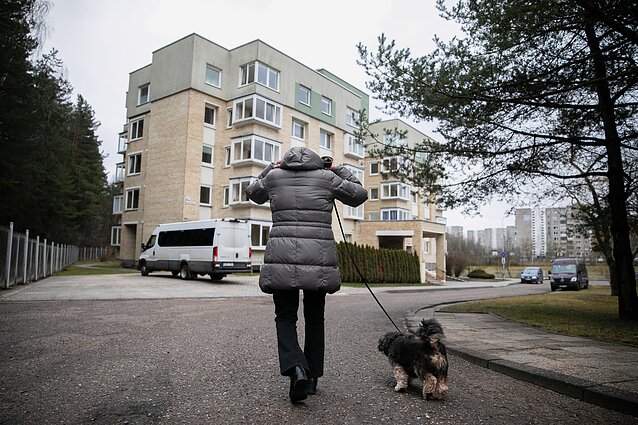 In all, 35 residents live in 30 apartments. Fabijoniškės Social Service Home is one of 21 such establishments across Lithuania: two are private, two are run by non-governmental organisations, while the rest are managed by municipal authorities.

The demand for places is high and the Ministry of Social Security and Labour estimates that the country needs about 80 senior living homes.

On Tuesdays, Jurgelevič, one of the residents, attends craft classes that keep the elderly residents busy, even though not all of them actively participate.

“Most of the people may need to be more actively engaged, motivated,” Sadauskaitė says. 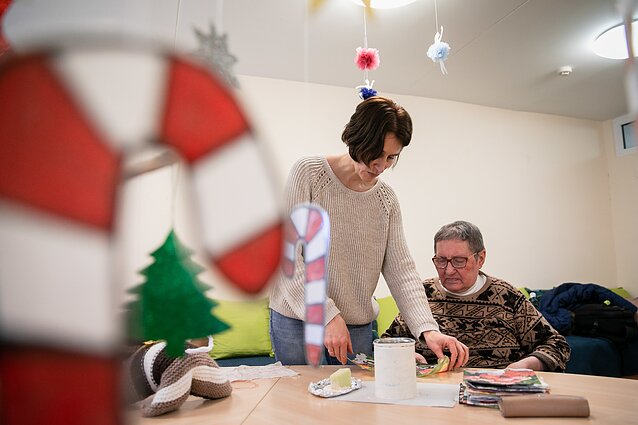 “We have noticed that the society is getting [more distant], neighbours do not know their neighbours,” says Dalia Kiaušienė, the director of the Fabijoniškės home. “Whereas here, we have events, interaction, people lead completely different social lives.”

In addition to craft classes, the residents play board games, watch films, organise events. “So that they are encouraged to take care of themselves, not just rely on others to do things for them,” according to Sadauskaitė.

“It shouldn't be a ghetto where elderly people are separated from other generations, that's a flawed approach,” she says.

Isolation is bad for both the elderly and the young, according to Mikulionienė: “[The elderly] lose touch with the society, while the young and the middle generation can't learn about [...] the process of aging.” 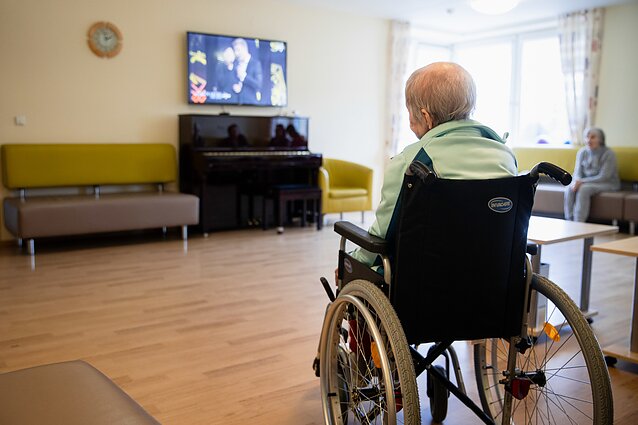 It is important to keep elderly living homes in mixed residential areas, according to Mukulionienė, where the residents live alongside families and children, so they can meet and see each other.

In addition to attending to full-time residents, Fabijoniškės Social Service Home runs a day care centre where people with Alzheimer's can stay during the day, while their families are at work.

“They sometimes call us kindergarten for seniors,” says Kiaušienė, the director.

The service is vitally important for many senior citizens and their families. 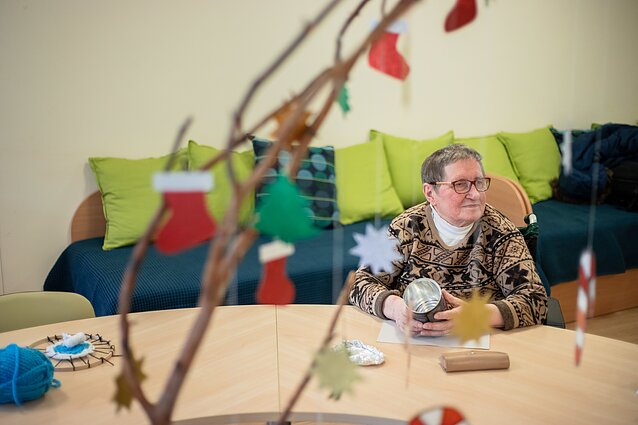 “[Taking care of the elderly] is mostly the family's responsibility, because the network we have [in Lithuania] is inadequate, people are on long waiting lists,” according to Mikulionienė.

Family members remain the primary caregivers of the elderly. “The state could develop a support system for the family members who provide the services,” she says.

But not all senior citizens have a family to take care of them. After spending a year at the home, Jurgelevič says she is content here.

“I tell everyone that last year was very good for me and I'm the happiest person to have my own place.” 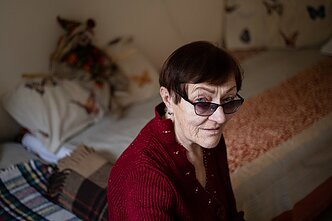 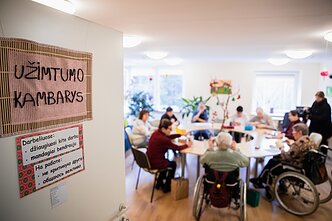 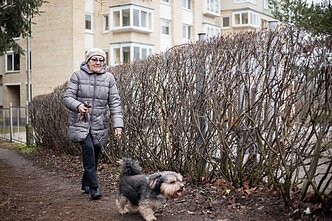 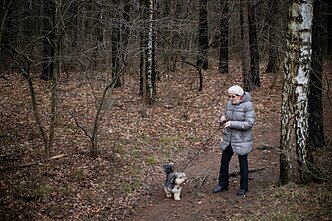 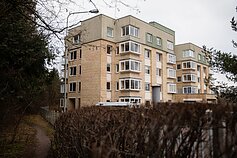 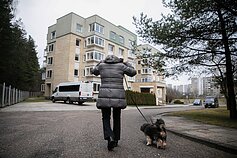 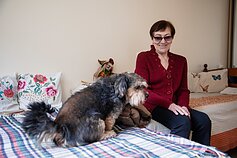