Lithuania might need ‘around €1bn’ to prepare for Astravyets accidents

Lithuania may need hundreds of millions of euros to prepare for nuclear emergencies at the Astravyets nuclear plant in Belarus. The plant is some 30 kilometres from the Lithuanian border.

Vilnius says the Astravyets NPP is unsafe, an allegation that Minsk denies, and has previously held emergency-response exercises.

The Fire and Rescue Department says it is planning to issue a call for tenders to carry out the study.

“We estimate that the total amount would stand at around 1 billion euros, and it would become a subject of political negotiations. It's not clear yet when and how much of these funds will be available,” Edgaras Geda, the head of the Fire and Rescue Department's civil safety board, told BNS.

He stressed, however, that the figure is preliminary and might change.

“Some preliminary data show it might stand at around 600 million euros, but since we plan to have an in-depth look at a variety of needs, one billion is a very rough estimate, just to imagine what the amount might be,” Geda told BNS.

In October, Lithuania held a four-day civil safety exercise to train emergency services to respond to a possible incident in Astravyets.

Belarus announced in December that nuclear fuel for the Astravyets nuclear power plant's first reactor would be brought in over the first quarter 2020. The reactor is expected to be launched this year. 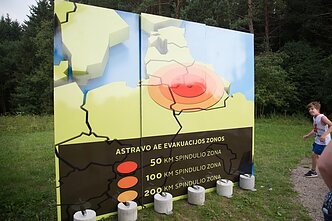