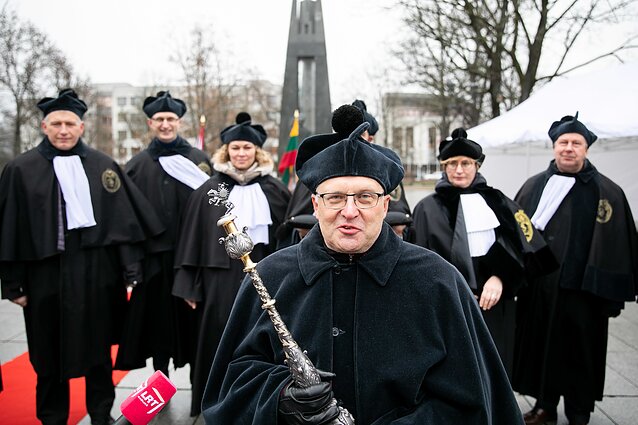 University professors handed out fake diplomas, awarded a ‘degree in demagogy’ to the minister of education, and said they will strike if the government doesn’t raise wages “as promised” / E. Blaževič/LRT

I - TURKEY AND NATO

Turkey’s problem: NATO’s unwillingness to back (politically, Ankara says) Turkish operation against the Kurds in northern Syria, and to officially designate the Kurdish YPG militia as a “terrorist threat,” according to Reuters.

NATO’s problem: YPG makes up the backbone of the Syrian Democratic Forces, which the US has trained, backed, and supported throughout the campaign against ISIS. Other NATO allies have also fought alongside the Kurds.

Solution? Lithuanian President Gitanas Nausėda, the country's foreign minister, as well as Estonia’s ministers have called for a compromise.

Answer: none, so far, on what the compromise may be.

Another threat to NATO in Lithuania, the country’s Defence Minister Raimundas Karoblis confirmed, comes from China. Overseas NATO forces often arrive in Lithuania via country’s only seaport in Klaipėda. China, meanwhile, made moves to acquire a majority stake in the enterprise which, Karoblis said, should be blocked by all means.

Having brought defence spending up to 2 percent GDP, the Lithuanian public thinks it’s enough. A survey commissioned by BNS showed that the majority of Lithuanians are against increasing defence spending above the 2-percent threshold called for by NATO, which the defence minister said, showed the “public misconception that national defence gets the lion's share of the budget”.

Protests and strikes erupted throughout Lithuania as the parliament entered negotiations for the 2020 budget.

Act 1: Farmers bring out a ‘tractorcade’
On Tuesday, farmers staged a ‘tractorcade’ in Lithuanian towns, demanding to cease all planned tax increases until they receive payments from the EU on par with Western European farmers.

Act 2: University lecturers bring out fake diplomas
On Wednesday, university professors handed out fake diplomas, awarded a ‘degree in demagogy’ to the minister of education (well, his cardboard cutout), and said they will strike if the government doesn’t raise wages “as promised”.

Act 3: Haulage firms stage a ‘funeral procession’ of trucks
On Wednesday, haulage firms protested a planned rise in taxes on per diem allowances, saying they will push the small-to-medium companies under.

Act 4: Truck drivers wear white bandages
Meanwhile, truck drivers staged a counter-demonstration to the ‘funeral procession’ in Act 3 to demand better working conditions. They say the haulage firms’ move to block pay rises is cynical due to the already dire situation of the drivers.

Act 5: Teachers issue a warning
Teachers in several hundred schools across Lithuania staged a two-hour warning strike on Thursday to press their demand for more funding next year.

BATTLE OF THE CHRISTMAS TREES IS BACK

Lithuania’s (arguably) favourite Christmas tradition is back in the spotlight – who’s got the best tree. This year, Vilnius announced it will have “the prettiest” one in Europe.

Continuing the tradition of Kaunas-Vilnius Christmas rivalry (it’s a thing), Kaunas opted for something entirely different – an environment-friendly ‘Space Christmas’.

Meanwhile, the rent-a-tree trend sweeping Europe finally arrived in Klaipėda. You can rent a Christmas tree for as little as 12 euros.

Pope Francis blessed Lithuania from cruising altitude as he flew over the Baltics on his way back to Rome, wishing “peace and welfare”. Although, Lithuania may soon find itself wishing for more from the above, as white Christmas could become a thing of the past due to global warming.

WHAT DO YOU THINK ABOUT LITHUANIA?

What do people say about you when you leave the room? Well, Lithuania caught itself thinking the same. As it turns out, not everyone is too polite – that is, if they know Lithuania at all. Full story, here.

Meanwhile Ukrainian President Volodymyr Zelensky said he was very happy to be welcomed so warmly in the Lithuanian capital. Zelensky came to Vilnius on Wednesday to meet his Lithuanian counterpart, Gitanas Nausėda. On the agenda: cooperation, solidarity, Lithuanian investments in Ukraine, and more.

THE SEIMAS AND GOVERNMENT LATEST:

– The proposed tax on banks and retail chains may come in January, but the proposals are coming up against opposition from the private sector.

– 15min.lt reported that 300,000 euros in public funds were spent on a road leading to the house of the Lithuanian Prime Minister Saulius Skvernelis.

– Transport Minister Jaroslav Narkevič, pressed by the 300,000-euro road upgrade story and a string of scandals elsewhere, refuses to resign. The president demanded his resignation on Thursday.

– A new political group emerges in the Seimas, uniting three parties that include an ex-mayor of Vilnius and a former acting president of Lithuania.

In case you missed it over the weekend, the reburial ceremony of the 1863 uprising participants, in pictures.

The legacy of the murdered Kremlin critic, Sergei Magnitsky – so far, Lithuania is one of only five nations to pass the Magnitsky laws. From our partners at Deutsche Welle.