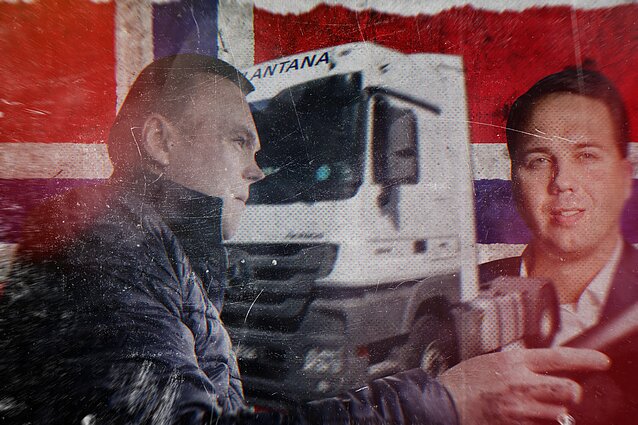 Forged documents, cut wages and psychological pressure on drivers who, before getting behind the lorry wheel, have to sign voluntary resignation letters without a fixed date. LRT Investigation Team reveals the scope of alleged abuse and potential criminal misconduct at one of the largest haulage firms in Norway founded by Lithuanians.

One of the two drivers who sued the company and were recently paid a 209,000-euro settlement, chose to speak to LRT Investigation Team, revealing the scale and scope of the alleged abuse at the company where the 200 drivers are all from Lithuania.

– Vlantana Norge AS, established in 2012, is the 12-14th largest Norwegian freight haulage firm and one of the largest foreign-capital firms in the sector.

– Vlantana Norge AS, as well as its sister company in Lithuania, are under criminal investigations in both Lithuania and Norway.

– In mid-October, two Lithuanian drivers were paid 209,000 euros in compensation by Vlantana Norge AS. They had sued the company for unlawful dismissal, forged working hours and payment data, and other alleged abuses at the workplace.

– Egidijus Navalinskas, one of the claimants, told LRT Investigation Team that the company reported 4.5-hour working days, though drivers would spend 13-14 hours on the road, and didn't pay for overtime and night work.

– Drivers had to sign resignation letters, declaring that they want to quit voluntarily without any complaints against the company. The documents were not dated.

– Norwegian Labour Inspection Authority has previously said it is very likely that the drivers’ work at Vlantana Norge was systematically underpaid, and that the documents with officially declared hours were forged.

– In November, the criminal division of Norway's transport inspectorate that investigated Vlantana Norge said the company may have committed crimes. The investigators plan to press formal charges.

– The Financial Crime Investigation Service (FNTT) has confirmed that they have investigated the company.

–Data gathered by LRT Investigation Team shows that the company in Norway is directly linked with one of the largest Lithuanian logistics companies, Vlantana.

– The Norwegian magazine investigating Vlantana Norge AS also says the company is coordinated by the company in Lithuania, Vlantana.

Egidijus Navalinskas began working at Vlantana Norge in summer 2016. When signing the contract, he already began to have doubts. Anyone who wanted to work for the company had to sign a voluntary resignation letter in Norwegian without a fixed date.

He had to sign two further documents in Lithuanian and English, stating that the employee had no complaints against the company. The two forms were also undated.

According to Navalinskas, almost none of the Lithuanian drivers could speak Norwegian, while only a few could understand English. They had therefore no idea they were signing a resignation letter.

The drivers only found out after one of the employees secretly took a picture of the form and had it translated.

According to official documents, Vlantana Norge AS, a company registered Norway, is unrelated to one of the biggest haulage firms in Lithuania, Vlantana, but there is evidence to suggest the two companies are directly linked. Navalinskas also signed the contract for the job in Norway at Vlantana offices in Klaipėda.

“There are no dates [on the forms], so it ends up [becoming a way to put] psychological pressure on you,” Navalinskas told LRT Investigation Team.

The head of Vlantana HR department took matters further when Navalinskas questioned the nature of the contracts. She told Navalinskas he might not be sent to Norway after all. Only after he opted to defuse the situation, did she try to reassure the new employees. “She said, ‘don’t be afraid’, and picked up a thick file, saying: ‘all workers signed the forms’,” Navalinskas told LRT. 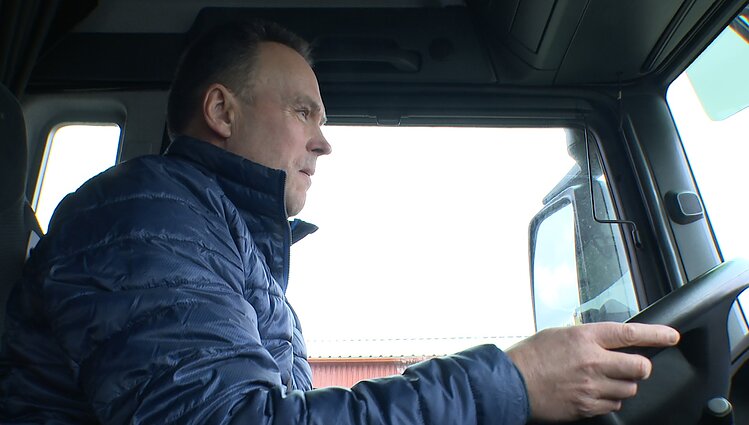 Vlantana Norge paid roughly the wage initially agreed upon and so Navalinskas didn’t complain at first.

The drivers would complain about poor working conditions among themselves, but kept mum in front of the bosses. “Those who were unloyal, who raised questions, were simply fired using the undated forms they signed earlier,” said Navalinskas.

The company moved to worsen the posted workers’ living conditions by making them share allocated beds between shifts.

“Everyone was angry, and then I said, we should sign a letter saying that the company had crossed all social responsibility lines,” said Navalinskas.

The management at Vlantana Norge began looking for the people responsible for the letter. The blame fell on Artūras – the real name is known to LRT – who later turned to court with Navalinskas.

At first the company worsened working conditions for Artūras and later fired him, allegedly also with the use of the same undated resignation letter.

In February 2018, Navalinskas filed an anonymous complaint to the Norwegian Labour Inspection Authority and, in early 2019, was fired.

In an audio recording heard by LRT Investigation Team, Vlantana Norge lawyer tells Navalinskas that his illnesses are a burden for the firm.

In Navalinskas’ case, however, the company didn’t use the undated resignation form. He thinks it may be because the drivers who had already turned to the court had a Lithuanian lawyer in Norway, Sandra Latotinaitė.

Norwegian journalists at Lastebil.no analysed documents, that were also seen by LRT, showing how the company may have engaged in fraud.

Not a single working day at Vlantana Norge was longer than 4.5 hours, and although the drivers also worked at night, only the day rate would be calculated. Overtime was also kept off the books, a claim that was supported by Navalinskas. 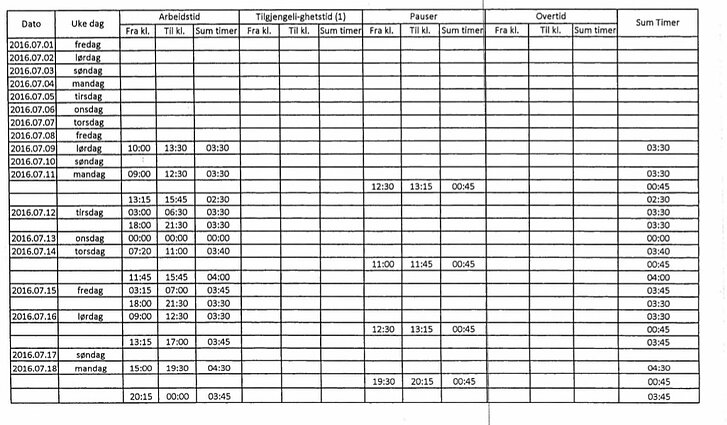 Vlantana Norge brought testimonies from 11 of its employees who told the court in Norway that they opted to work part-time because they wanted to spend more time with families.

Some drivers also claimed that the company allowed them to use their lorries after work, which is why they used the multi-tonne vehicles for trips around Norway.

However, the court rejected these claims. The lawyer hired by the disgruntled drivers, Latotinaitė, also asked an expert to analyse the workers’ signatures on company papers.

The specialist said the differences in signatures were profound, indicating that the documents were likely signed by other people trying to imitate the employees’ real signatures.

The expert also found that the company digitally altered work reports filed by the drivers and edited down the reported number of hours worked.

“Our signatures were forged,” he said, referring to Artūras’ work reports from the past 1.5 years and his own from almost a year.

However, the confidentiality clause wasn’t included in the final agreement signed just 12 hours before the court hearing.

Norwegian media picked up the investigation after journalists compared financial statements by Vlantana Norge and other companies in the same field. The data revealed that the Lithuanian company had roughly the same running costs as its competitors, but spent twice less on wages. 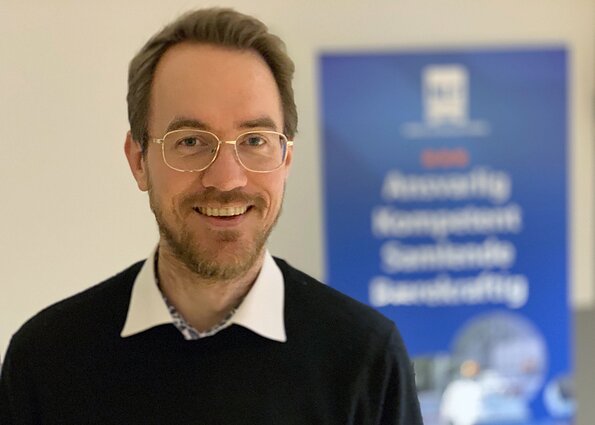 “We shared the information with the criminal department at the transport inspectorate,” said Stølen. “This finally became a big operation, with two raids [by three different Norwegian institutions] in the offices of Vlantana Norge.”

“This evidence points to organised criminal activity against the company’s workers, which had an effect on Norway’s transport service costs,” he added.

The head of the board at Vlantana Norge AS, Vladas Stončius Jr., told LRT Investigation Team in a written comment that “we admit there were human errors, therefore we opted for reconciliation” with the two drivers who received over 200,000 euros in compensation.

However, Stončius claimed there were no strings attached to the settlement. “There was no [confidentiality] clause in the agreement,” he said, adding that Norwegian law doesn’t engage in such “practice”.

He also said that the company “employed competent specialists and lawyers which, we are sure, will guarantee the highest operating standards”. Stončius repeated the company’s claim that the drivers signed up to a 20-hour working week knowingly.

“After receiving the conclusions [by law enforcement], we are undertaking an internal audit together with the lawyers, and we’re reviewing the accounting system,” said Stončius.

“At the moment, many recommendations have been completed according to Norwegian labour laws [and] we have to present a fully-mended system to the labour inspectorate by March 25, 2020,” he said.

The head of communications at the Lithuanian police, Ramūnas Matonis, told LRT that the Lithuanian criminal police was undertaking a large-scale investigation into fraudulent accounting which involved Vlantana. 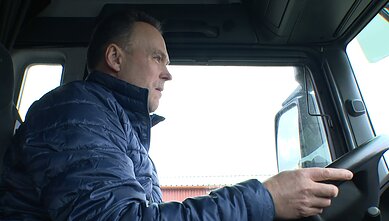 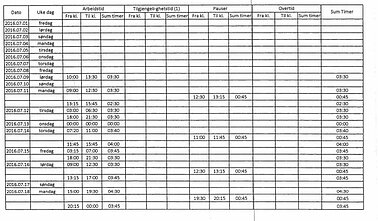 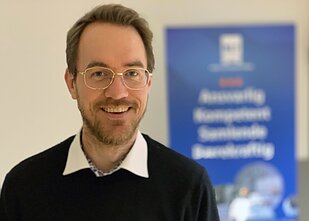 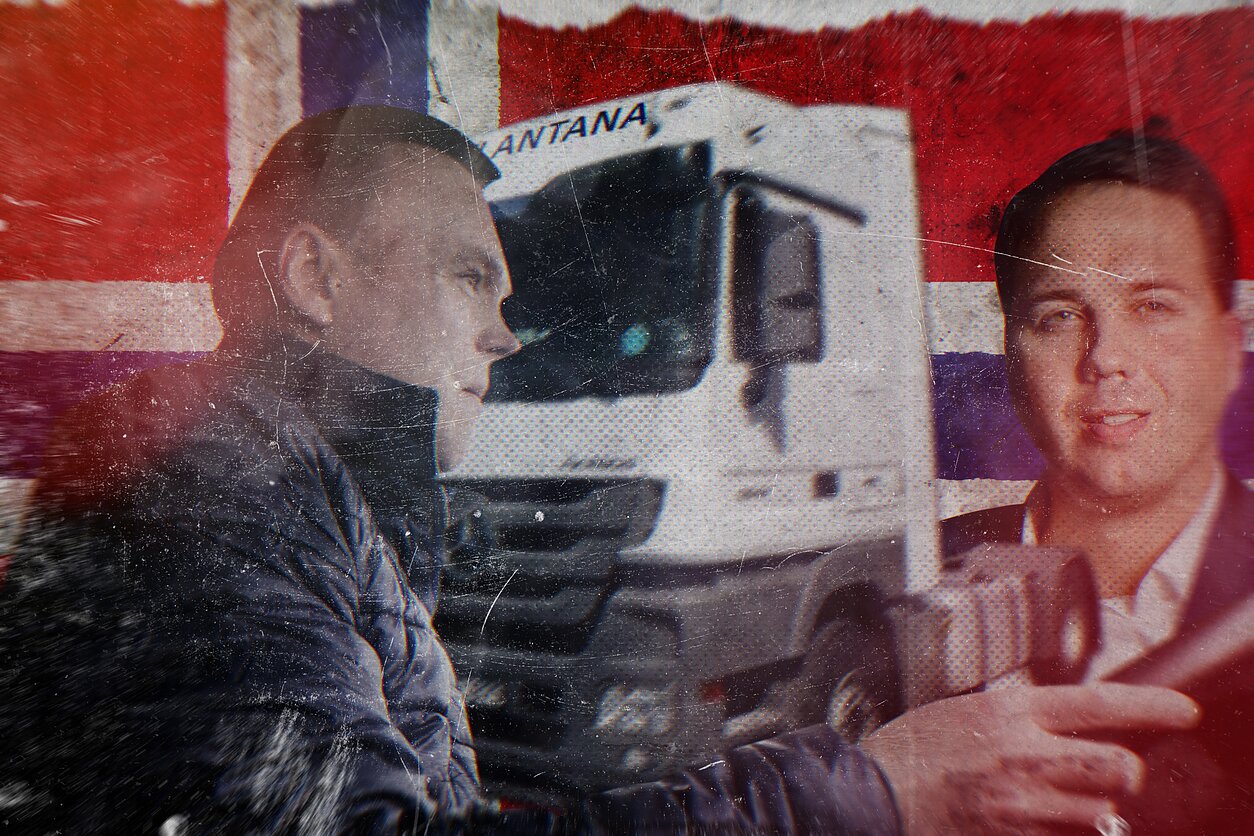 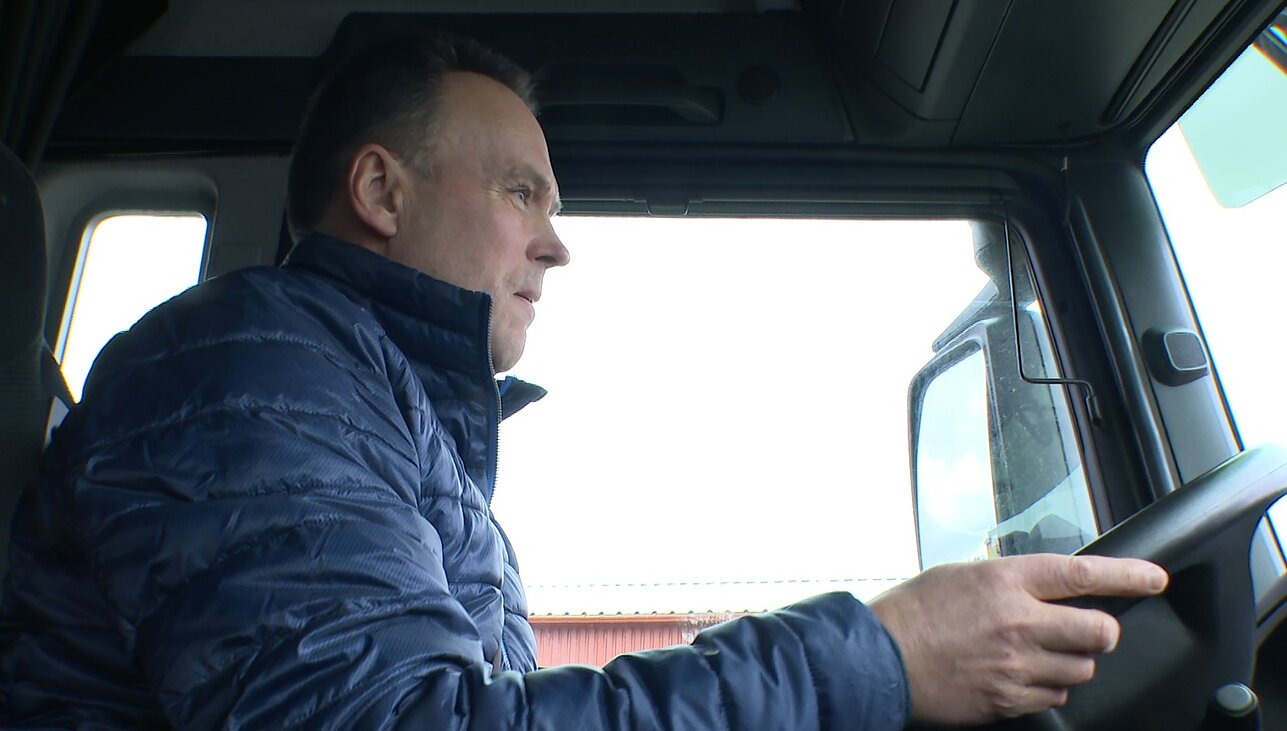 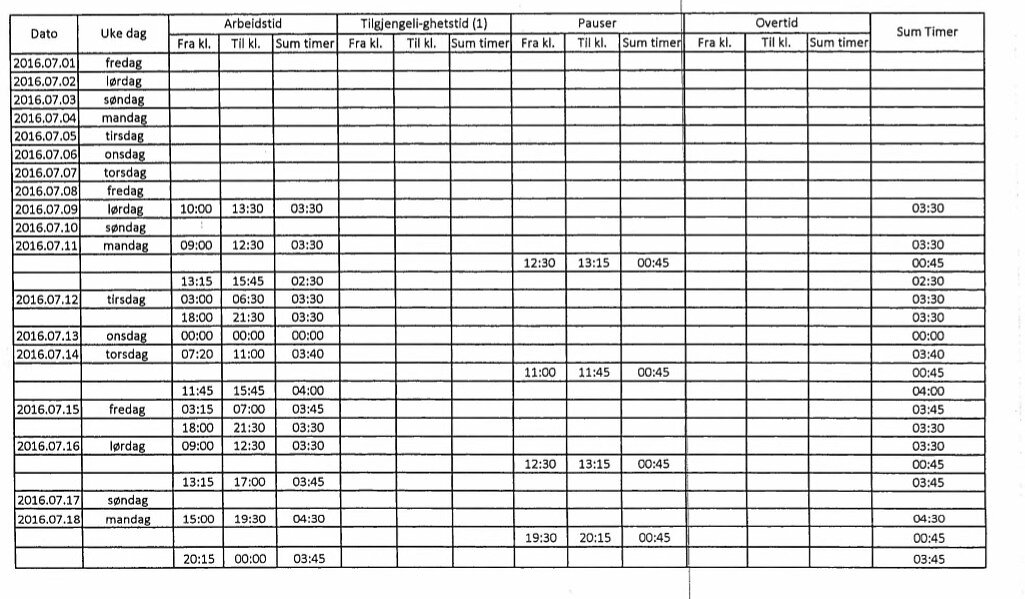 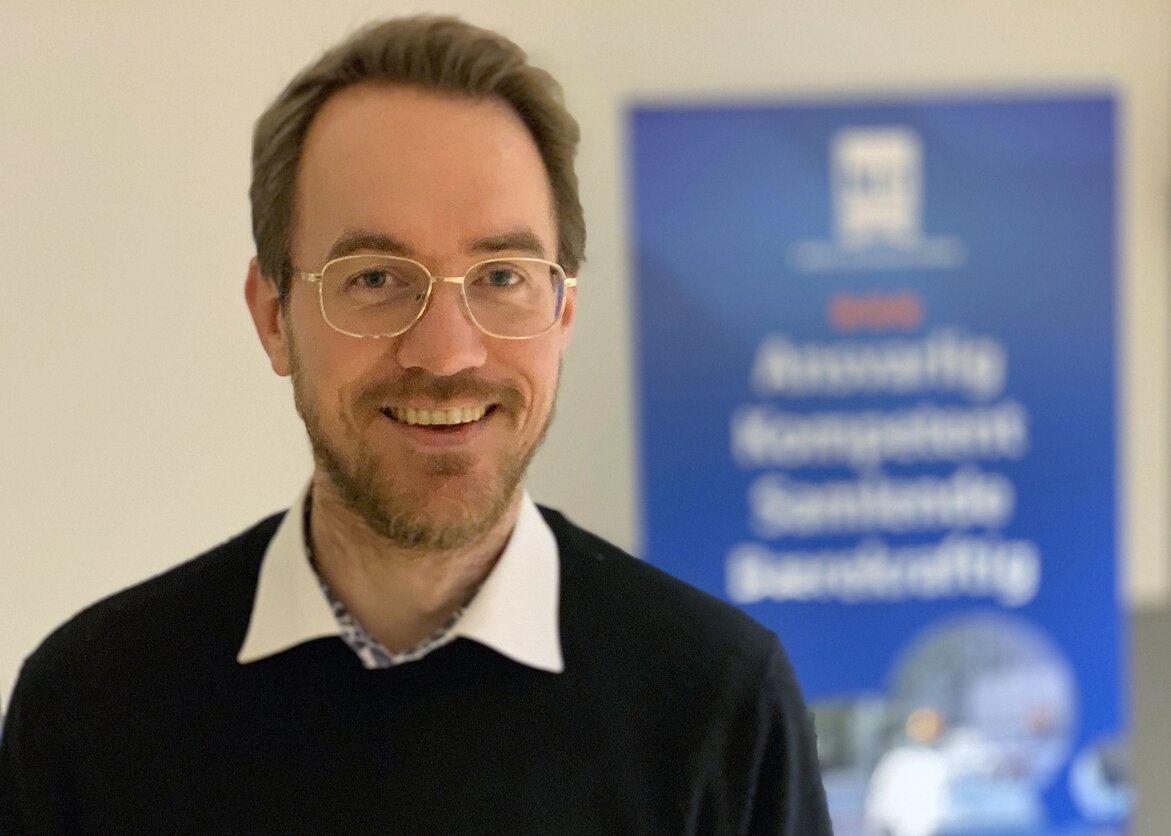