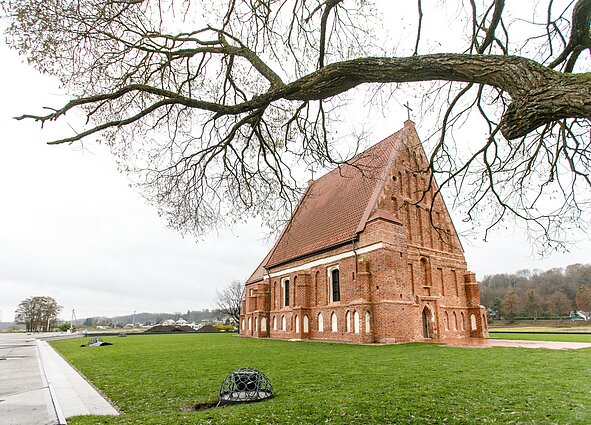 Plans to pave a square by the medieval Saint John the Baptist church of Zapyškis caused a social media outrage. Politicians joined in to demand punishment for heritage protection authorities, though some architects have defended the controversial project.

The sight of the Gothic church in a totally natural surrounding gives a sense of permanence, of it being a conserved piece of the past that has not changed for centuries. In fact, however, when the Saint John the Baptist Church was built in the 16th century, it was the centre of a village on the Nemunas riverbank, sitting on a central square bustling with life.

River tides would flood the village every spring and people gradually moved further from the bank, leaving the church to stand alone. The edifice and its surroundings are now a protected monument and a beloved site.

To make the church more accessible and incorporate it into the public life, the municipal authorities decided to pave a square in its vicinity where the town square used to be.

However, the concrete slabs that were laid on the green riverbank outraged parts of the public and caused a social media storm.

“It's an architectural crime that is without analogs. A bomb,” architect Audrys Karalius, whose Facebook post started the wave of outrage last weekend, has told LRT.lt.

He posted photos of the fragile red-bricked church against the brutal-looking slabs of concrete that went viral on social media. 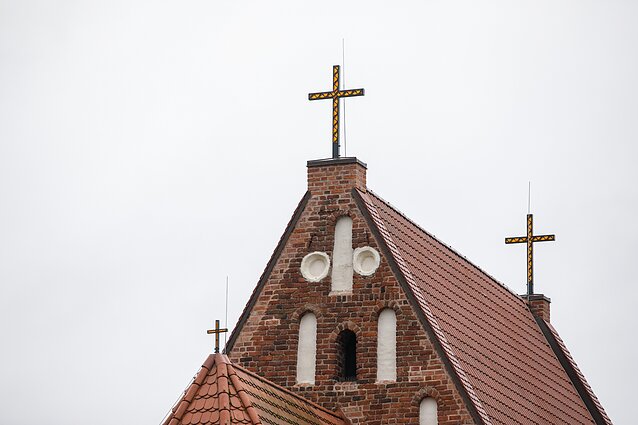 The Kaunas District Municipality and the local heritage protection body had greenlit the 850-million-euro construction project of paving a square and installing electric lighting, but politicians and public figures are now saying that it should be stopped.

On Wednesday, the issue of the new square by the Zapyškis church was discussed in the parliamentary Committee on Culture. Its chairman, Ramūnas Karbauskis, says that the concrete platform should be dismantled and officials who signed off on the project should be punished.

“It should be a lesson to everyone that such things should not happen,” Karbauskis has commented.

The Ministry of Culture has launched an inspection into the paperwork of the project and the work of the Kaunas chapter of the Cultural Heritage Department.

Culture Minister Mindaugas Kvietkauskas visited the site on Tuesday and expressed concern about the construction.

“The material that was chosen, concrete, is a very aggressive intervention into this unique Gothic environment, there could have been other solutions,” Kvietkauskas said. “This raises a lot of questions for us.” 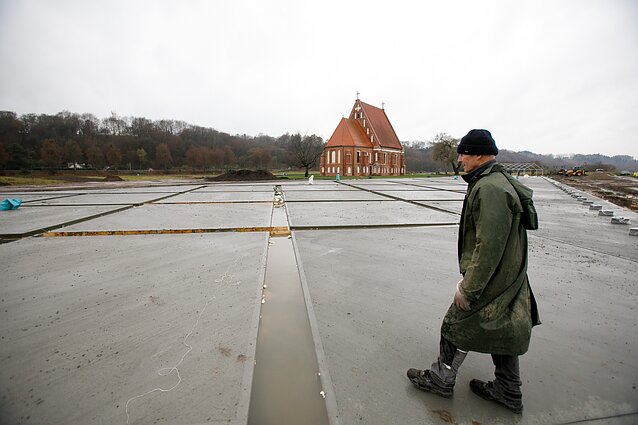 However, the author of the project has defended his solution, saying that paving the square with cobblestones, which never existed in this place, would be kitschy and false.

“We did not want to falsify history or mislead people that this is somehow a genuine [old] square,” architect Gintaras Prikockis said. “We made it a modern square.”

Some in the profession agree. Lukas Rekevičius, the chairman of the Architects' Chamber of Lithuania, says that Prikockis' solution of using modern design and materials is quite elegant.

“People were outraged because the current view of the church in the fields is quite romantic. The same kind of romanticism we find in the ruins of the Scottish highlands. But there is nothing natural about either,” he says, adding that the last structures near the Zapyškis church were only demolished in 1957.

People are incensed by the clash of old and brand new, he notes, but the concrete structure will not look so new once it ages a little and sinks into the environment. 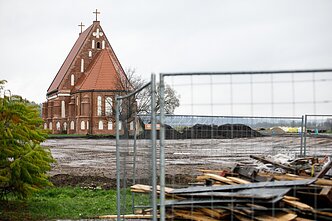 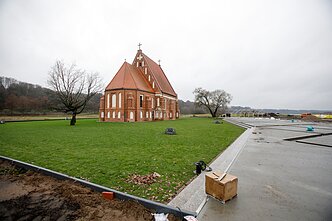 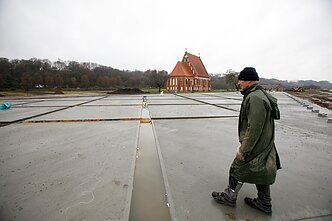 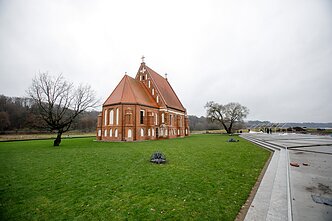 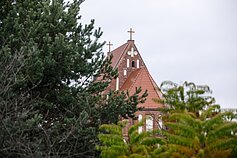 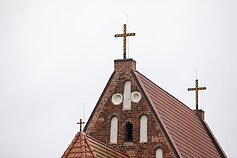 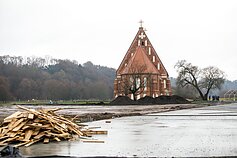 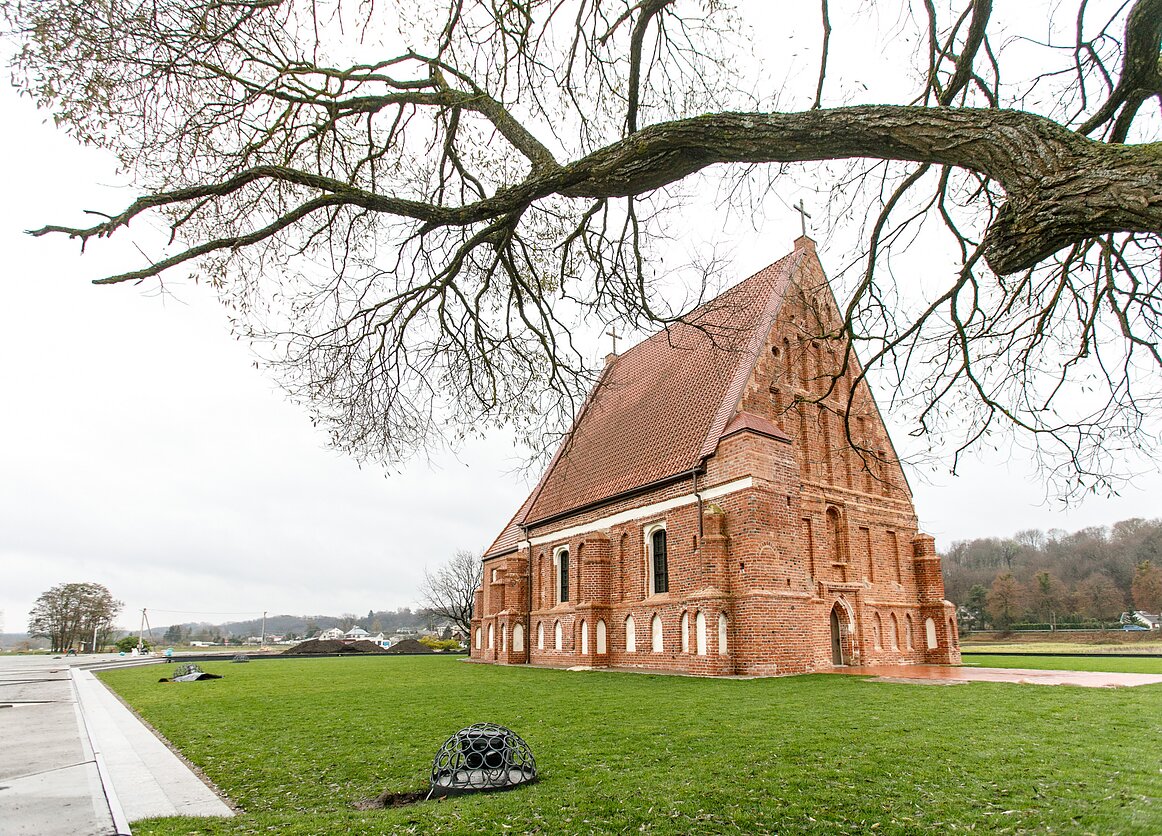 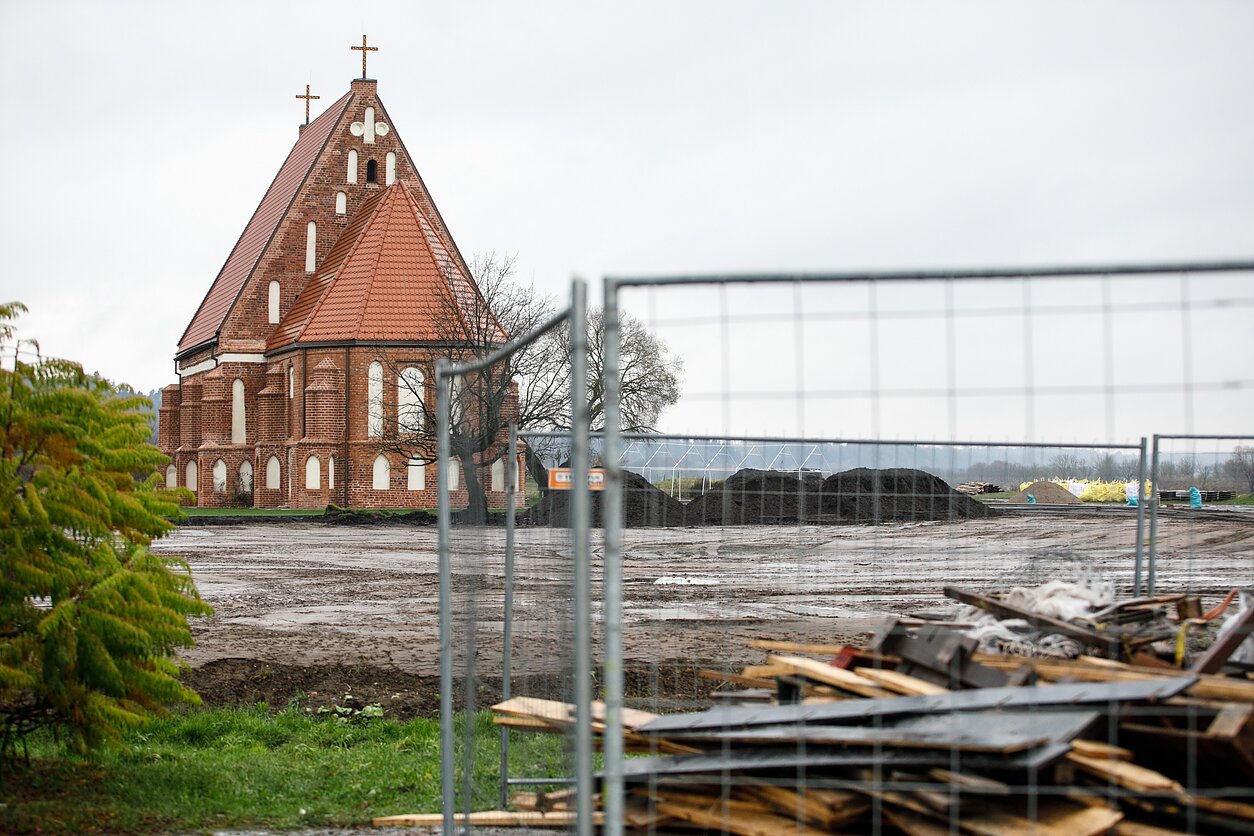 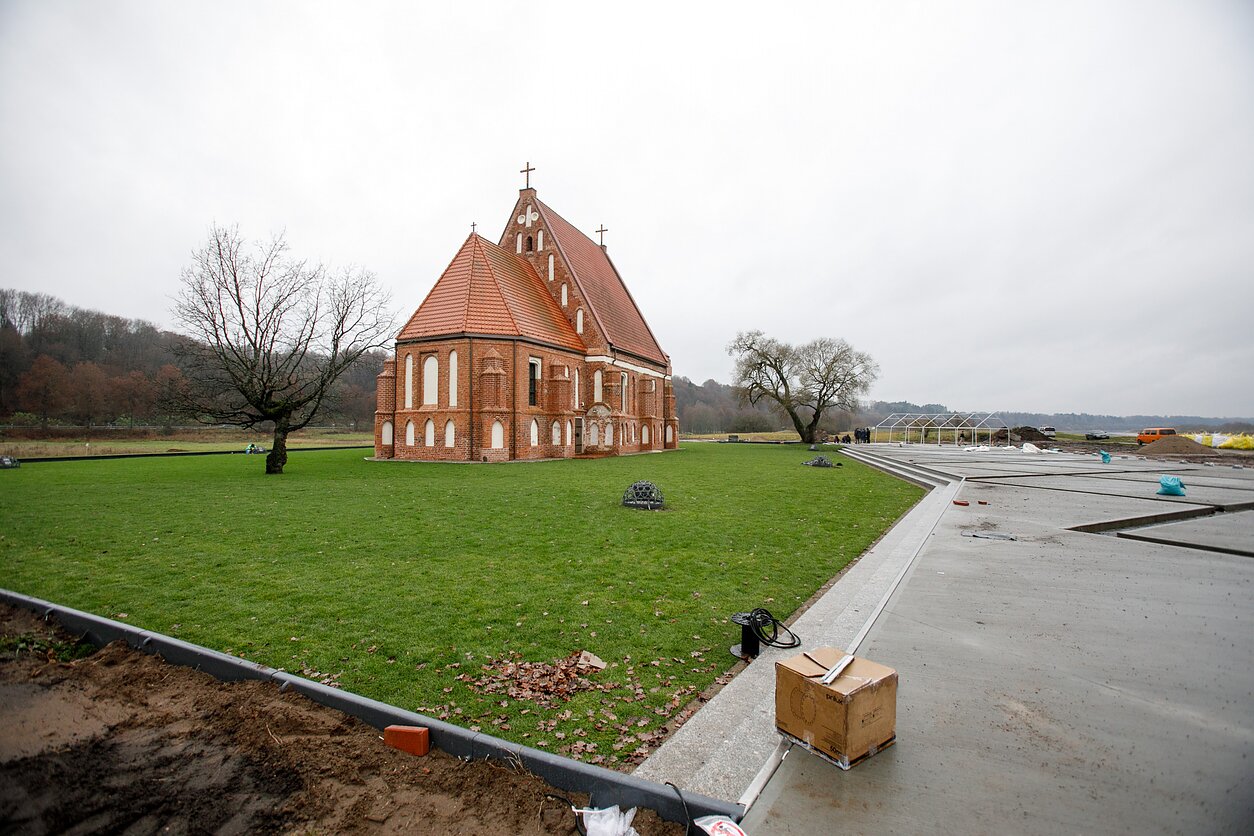 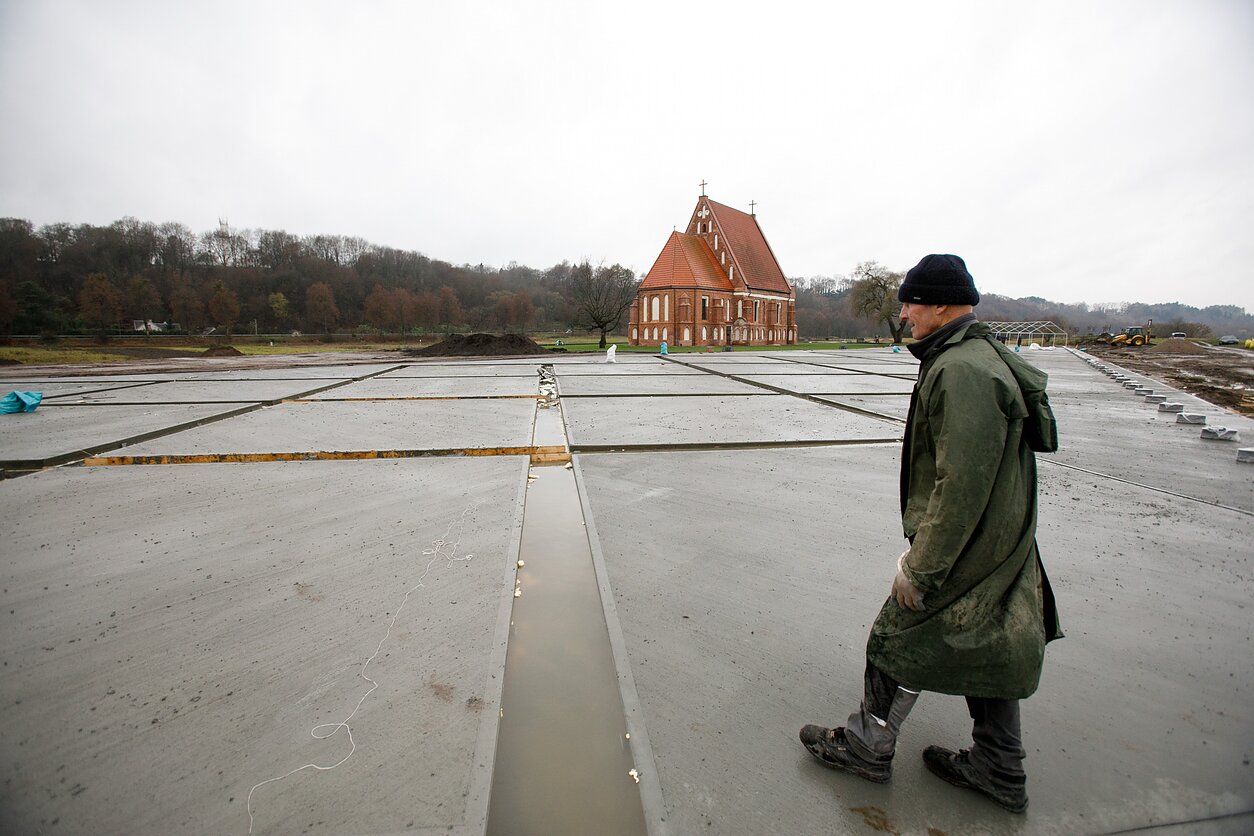 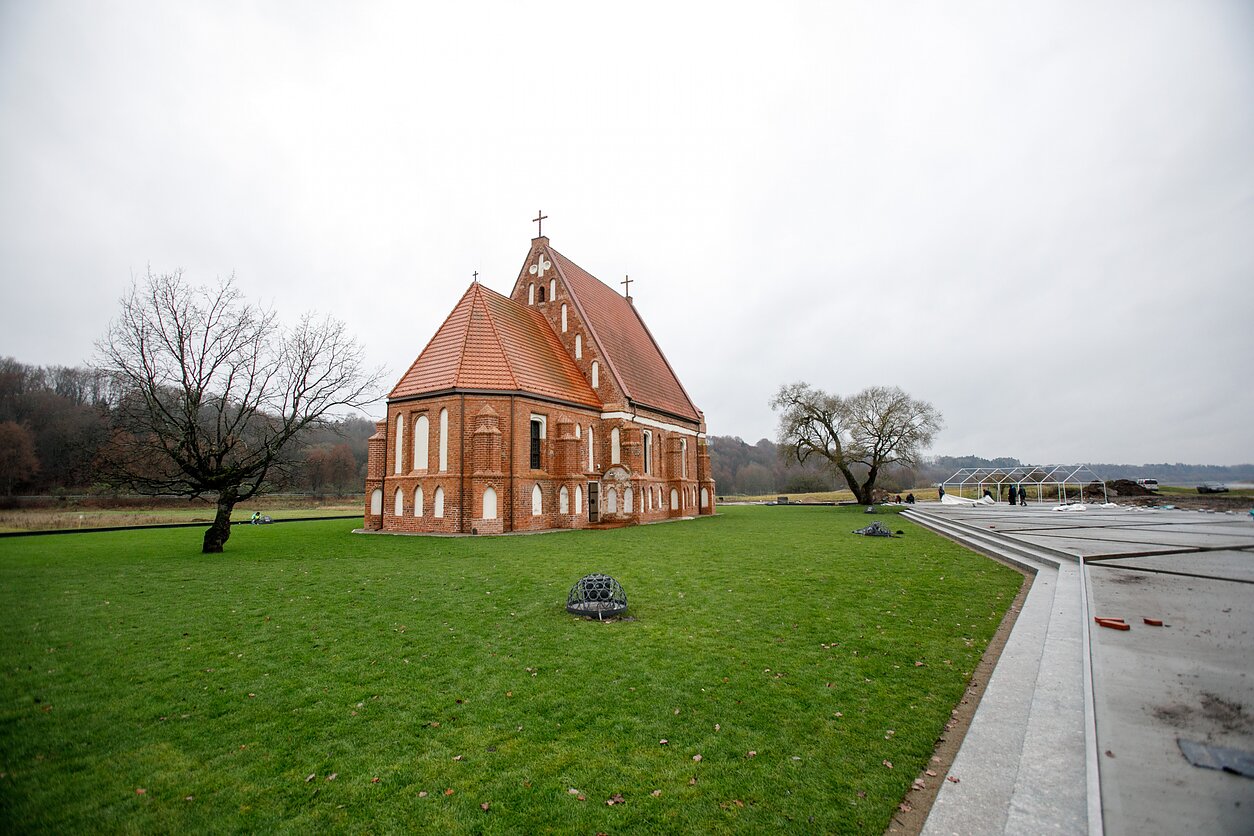 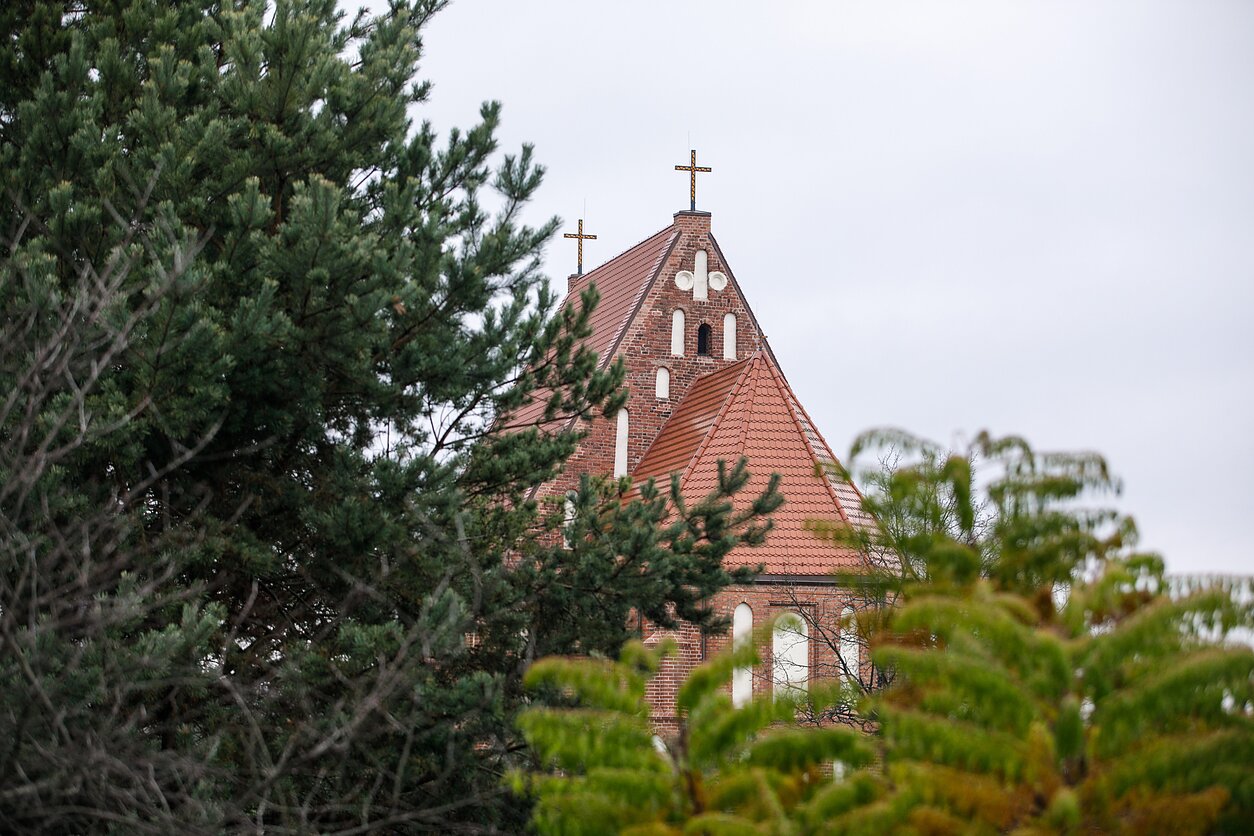 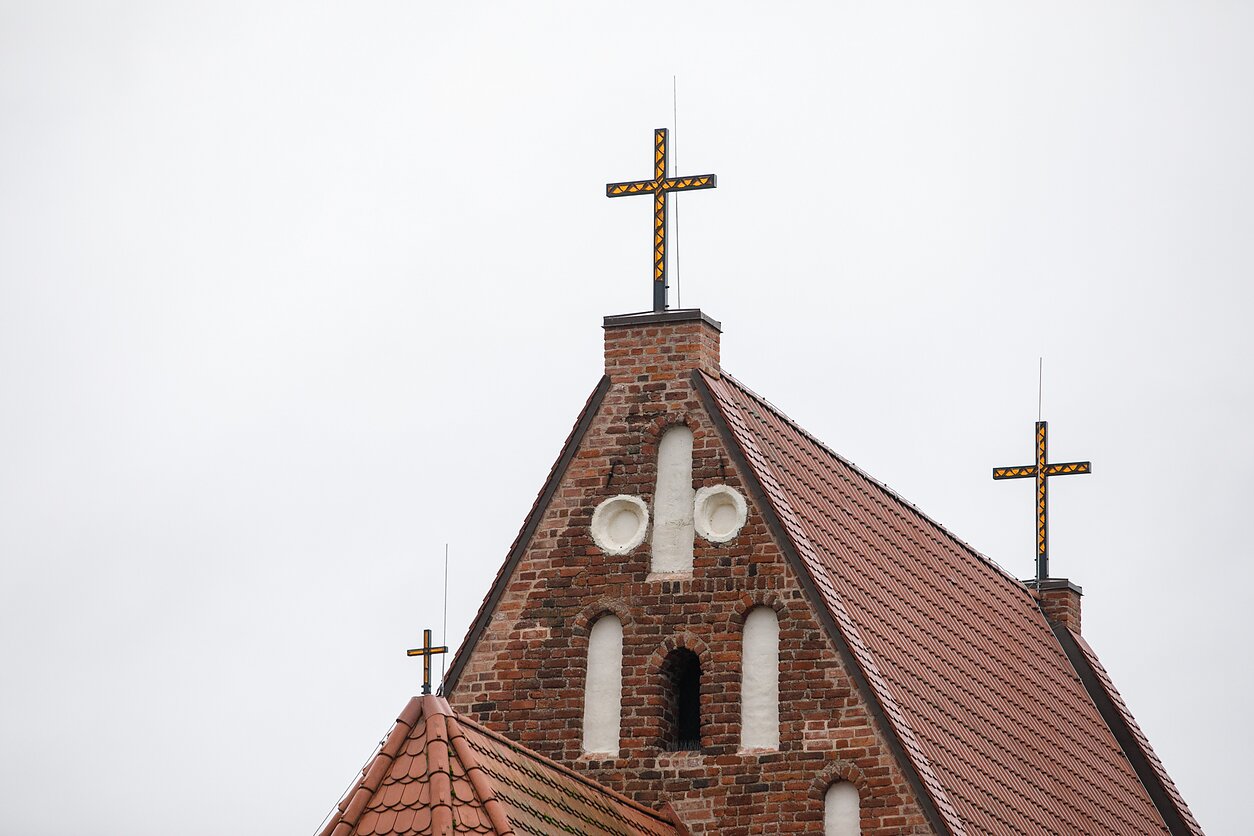 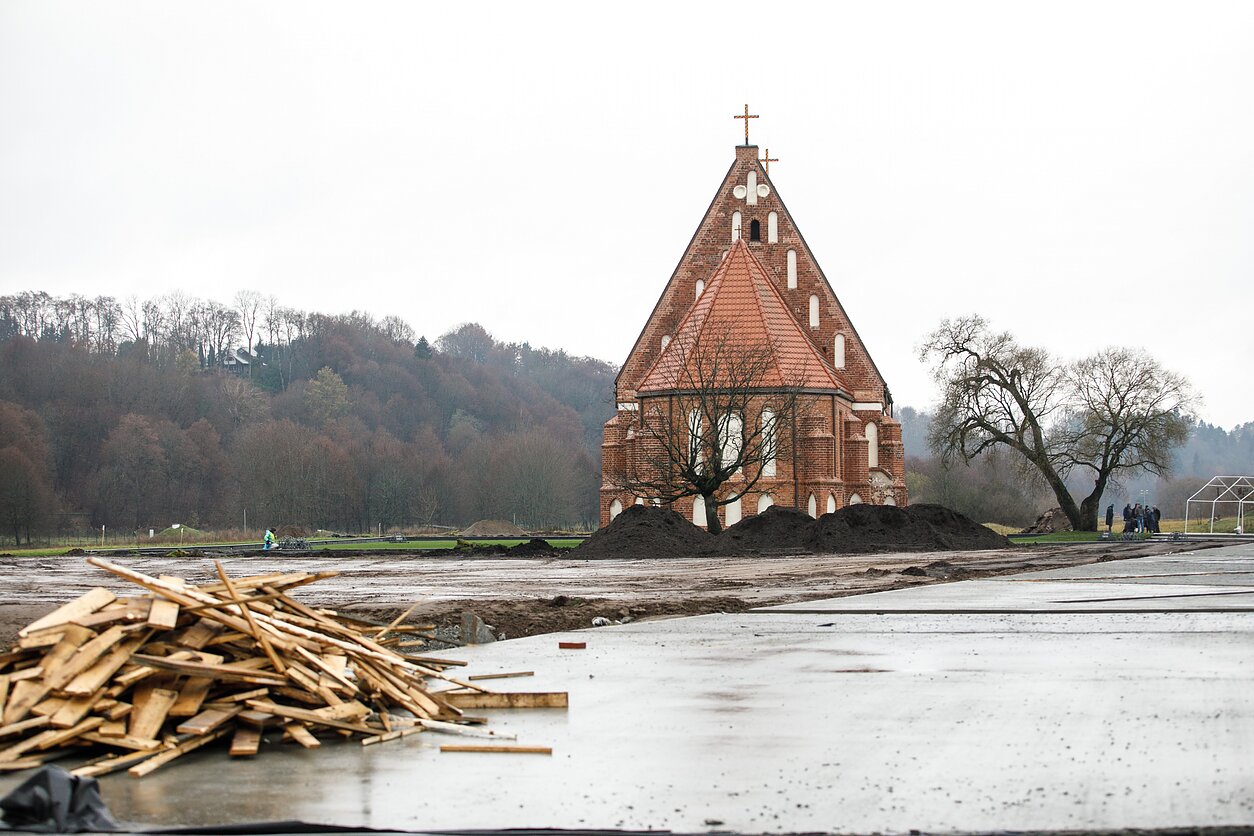 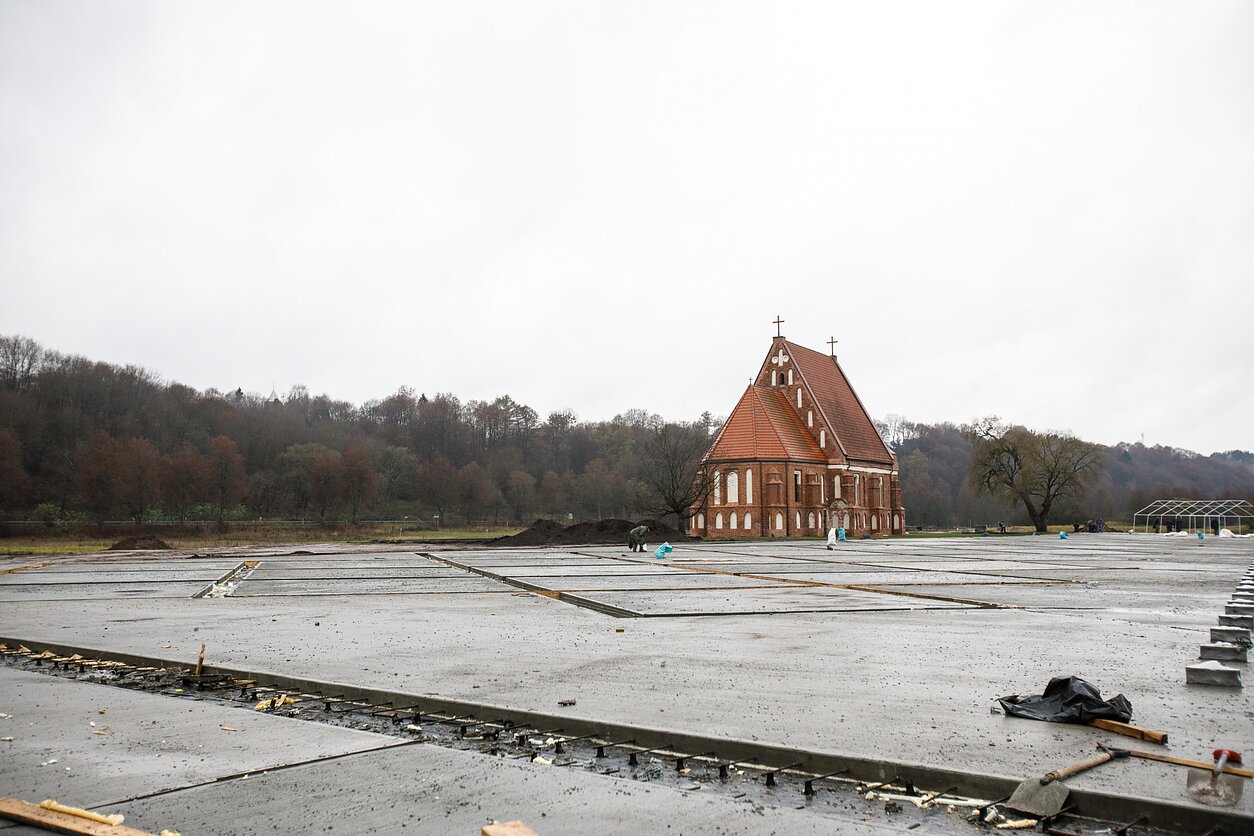 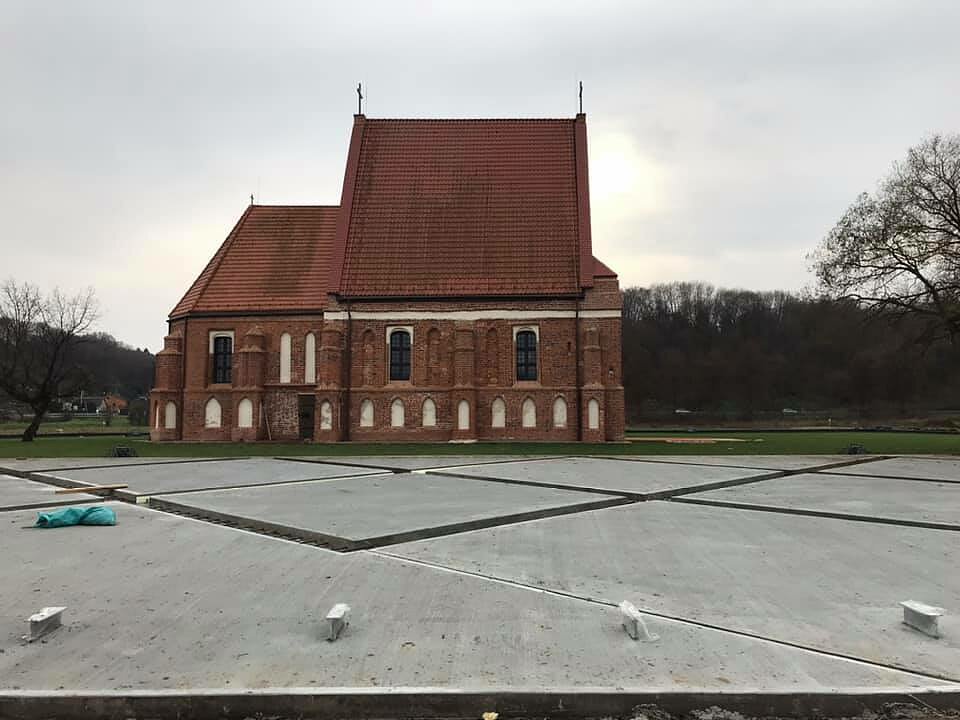 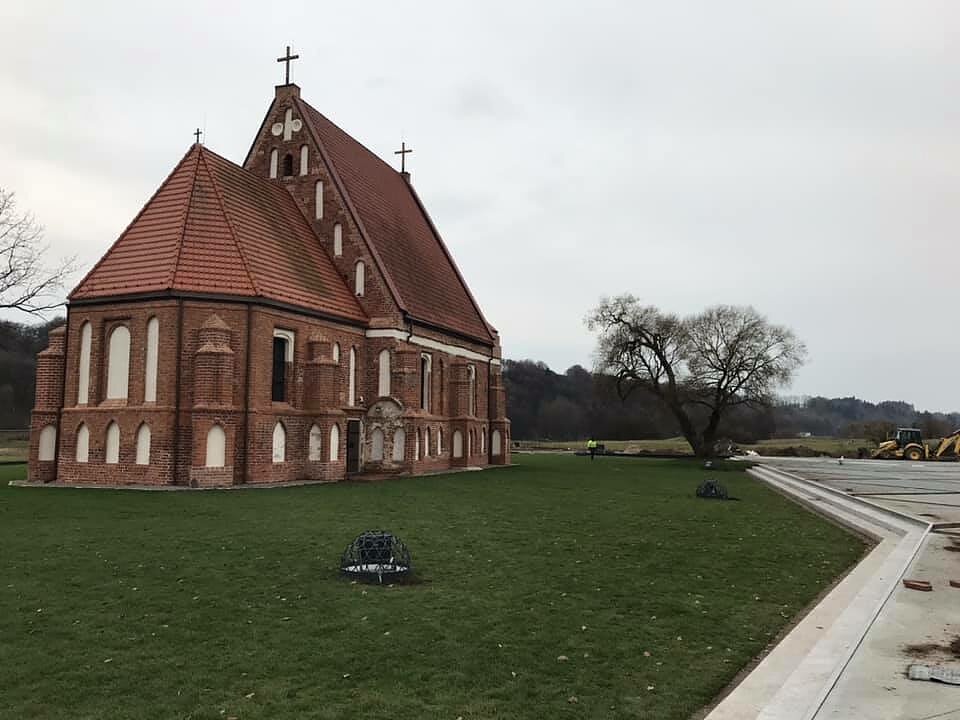 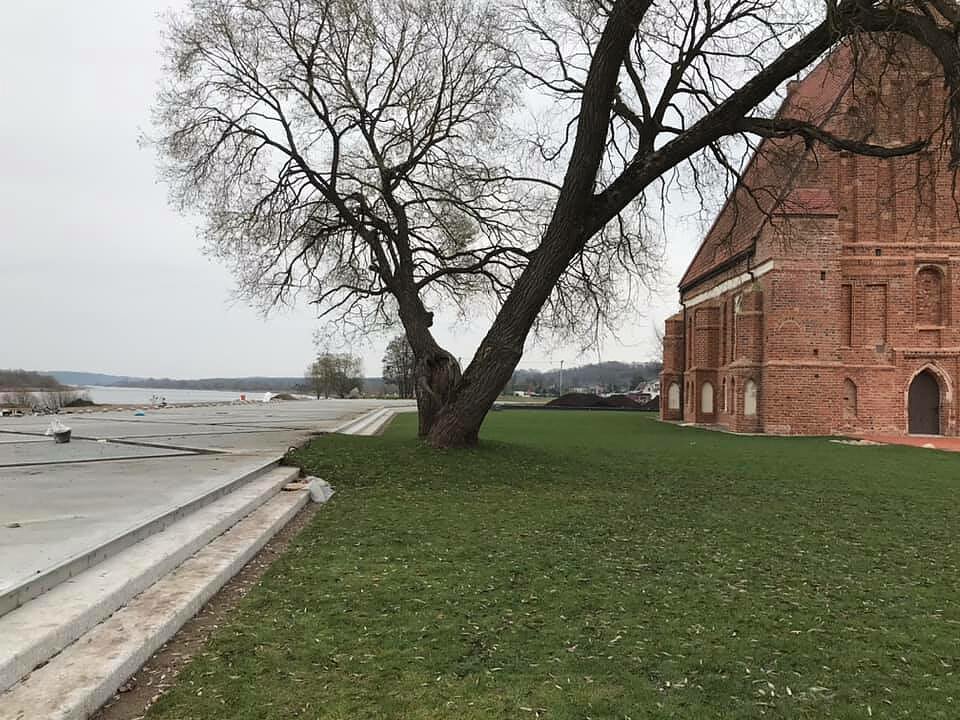 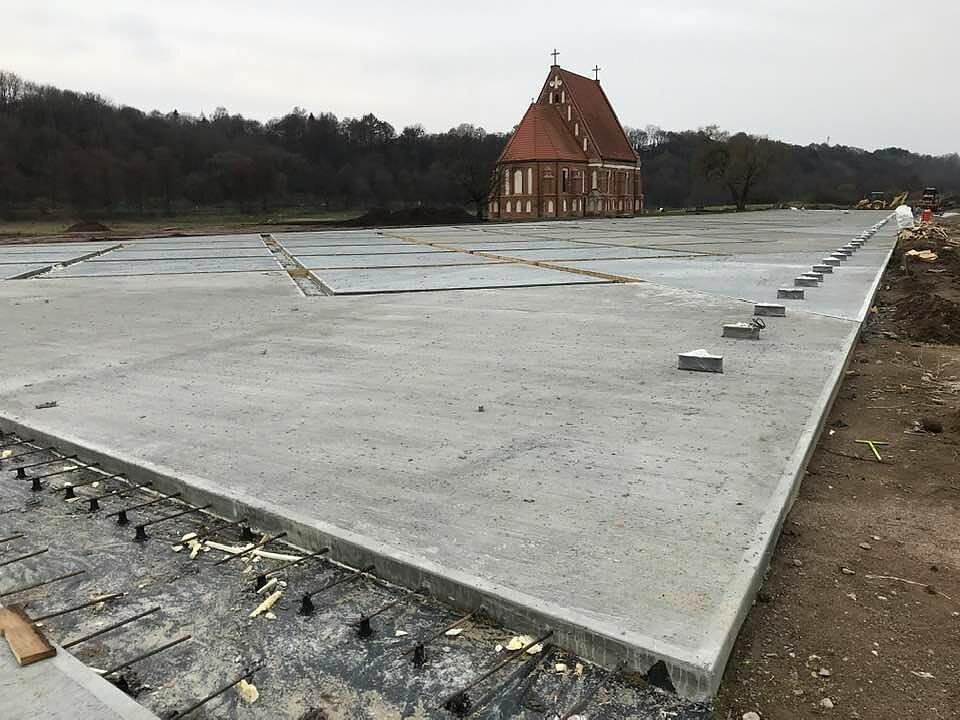