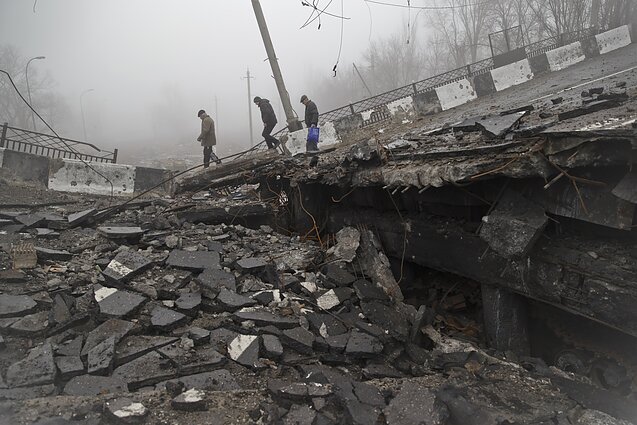 While Lithuania has been hosting Ukrainian soldiers undergoing physical rehabilitation, few Ukrainians have spoken publicly about the mental scars left by the war in Donbass.

Ukraine has heard stories of veterans opening cafes and launching startups. But this one found herself in show business. The way she communicates her experiences is rather unusual.

Anastasiia Shevchenko took part in the 2013-2014 Maidan Revolution and the war in Donbass. Now she is a TV host and a singer who makes provocative, yet touching music videos under the name CTACIK ('Stasik' – short for Anastasia). She is one of the few veterans and artists who is willing to talk about her tough first-hand war experiences in a meaningful and musically relevant form.

Her music is tough to listen to, but people do like it, which is testified by the positive comments under her videos. She admits that her songs can be hard to digest, but people always like what is genuine.

“We like pretty things, but we require genuine things.”

September saw the release of a new video with an evocative title 'Lullaby for the Enemy.' Naming no names but using strong metaphors and visual images, the singer wishes upon the enemy "to become Ukrainian soil for wanting [to conquer] this land".

Her other video, 'Shadow Fighting', is equally hard-hitting and shows Shevchenko facing the fears and inhibitions she already had and those she developed as a female who went through warfare. This is especially relevant in a society where there are clearly set out expectations for both genders, with most pressure often coming from relatives.

Shevchenko went to war as a volunteer in August 2014. But since her return from war, she has been very open about her experiences, unlike fellow soldiers who often find it difficult to share all details. Shevchenko gave numerous public speeches that shocked some people with frankness. These days, however, she is undergoing therapy and trying to avoid direct contact with the topic of war, hoping to focus on her musical career instead.

Talking of her candid performance at the Ministry of Foreign Affairs event in 2016, she distinguishes between “speaking as a military and as a veteran”. Most speeches given by veterans concern war and what the life there was like. Few people choose to speak of post-war life.

After Shevchenko took part in the Maidan Revolution at the age of 20, her life changed forever. She refers to the experience of growing up as an “accelerated natural evolution,” which in turn led to less approval-seeking. However, she can still be shy and conscious of her appearance and does have a fear of being humiliated.

According to Shevchenko, her body is not made for sports or heavy workload, yet she always somehow managed to find the strength to offer help wherever it was needed.

Speaking of her time in the Donbas, she recollects how in extreme conditions, she was “able to deliver using merely her survival instinct and willpower”.

“I went ahead and my body just, sort of, had to adapt, but now I am paying the price.”

Shevchenko’s current needs are very basic. She has accepted the fact that her health will never be in the pristine condition again, so all she wishes upon now is “the energy to go forward in life.”

It is only recently that she started identifying herself differently, as a TV host, for instance. Previously, she always introduced herself as a veteran in therapy. For the former soldier, it was a big step to be able to identify herself in a different way. She recalls some civilians feeling shame and discomfort when talking to people who have been through a war.

“We rarely forgive each other fear or aggressive behavior.”

Shevchenko urges people to treat the military just like any other humans, but the main problem lies in the inability to place yourself in the other person’s shoes.

Speaking of people who choose to ignore the presence of war and live on as before, she can understand them, albeit not the ones who say “we didn’t send you there” or those who call it “oligarchs’ war”.

“I was ecstatic to return to Kyiv – I wanted everything the city had to offer at once!”

In this respect, Shevchenko is much like her peers: she admits spending time going through her friends’ social media pages and even mentions the thoughts she had at times: as if she were “defending the existence of her favorite cafe at the frontline”. At the same time, fellow soldiers often did not share her standpoint, failing to understand how someone can be having fun, whilst they were in pain and jeopardising their lives for their country.