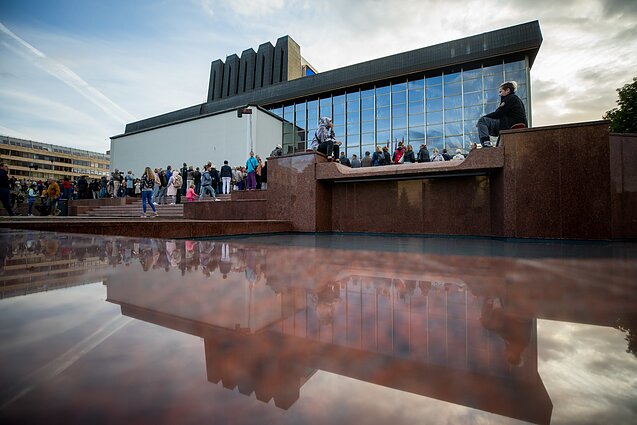 Forever and a Day is due to premiere at the Lithuanian National Opera and Ballet Theatre (LNOBT) in October, directed by the Israeli choreographer Itzik Galil – former member of the Batscheva Dance Company and Bat-Dor Dance, who later moved to the Netherlands and established his own ballet company.

According to a press release, Galili is not only the director and choreographer of the production. Having undertaken to produce the performance in Vilnius, he gathered various poems that he wrote during different periods of his life – they provide the thematic background for Forever and a Day, as well as lyrics for the songs.

Martynas Rimeikis, assistant to the theatre’s artistic director of ballet, claims this production can be perceived as both an opera and a ballet.

The creative team named their work dance opera, its music is being written by young composer Rita Mačiliūnaitė, who in 2017 was bestowed the Golden Cross of the Stage award, while the dramatic concept of the piece is formulated by dance critic, producer, dramatist Ingrida Gerbutavičiūtė. 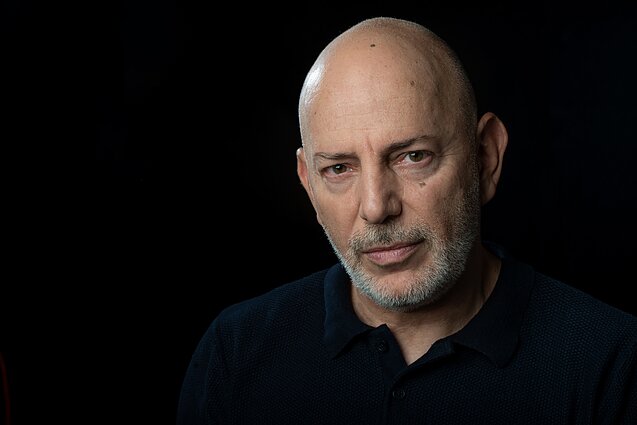 What will Forever and a Day give to the Lithuanian context?

Ingrida. First of all, a unique structure. Secondly, an innovative genre – in Lithuania a dance opera was produced only a few times. Thirdly, we shall have a production by a world-class choreographer, who is in high demand all over the world. This time he decided to come to Lithuania; it is an enormous gift.

Itzik. I really don’t feel like an international star. I’m fascinated by Lithuanian artists, especially by the latest news about their victory at the Venice Biennale – the Golden Lion for opera Sun and Sea. There were so many artists who previously tried to explore the subject of climate change – and this small, poorly financed team from Lithuania finally managed to do that. In my perception, it is a powerful reminder of how crucial it is to give young artists a possibility to work and show their work to the world. I’m happy that I can create Forever and a Day with young, talented people. Such personalities must be pushed forward and encouraged at all times. Of course, it’s not easy if they’re still being “trained” at school by their teachers equipped with staffs. Every person of the world of art must understand how to find new things in bodies, thoughts and souls. If we don’t do this, we die – emotionally, mentally and physically.

How would you describe the genre of dance opera?

Itzik. I could compare operatic and political situations of our days. In many countries there is an obvious uprising of radical right power. Due to various reasons some people perceive it as a good sign, others – as a bad sign. In exactly the same way, we have appreciators of classical opera, who trust the traditional description of the genre (I would call it the ‘right wing opera’) – it keeps up with the means of expression that were established a long time ago.

At the same time, there are various artists that provide to traditional opera their unique ideas and possibilities, who stir, break and examine the genre. For instance, in Stuttgart a certain young director produced an opera, in which the characters climb into an elevator and sing there, while the audience is listening to their receding voices.

Another director, who created opera about an old father and a son who was taking care of him, filled the stage with the stench of feces – in this way, he tried to explore the situation that engulfs elderly, ailing people and the relatives who take care of them. And the audience liked it! Thus, the classical opera of today showcases a lot of fractures, through which seeps the light of different colours. I truly hope that with time this principle will turn into the main direction of this genre. Personally to me, opera is a possibility to tell stories in ways that are unusual.

Ingrida Gerbutavičiūtė. For a while now, contemporary genres have been joining together music, dance, video material, visual arts, etc. It is the union of these elements. Representatives of classical genres claim that they too are welcoming new, fresh ideas, while keeping classical form intact. 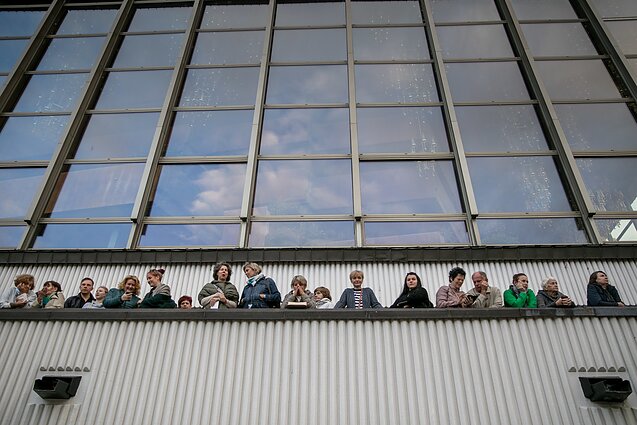 Does this opera have a storyline?

Ingrida. Libretto is more common when it comes to classical genres. In the case of Forever and a Day, the approach is more contemporary, therefore there is not libretto. One should also not expect a linear narrative.

Rita. Such approach is nothing new, although it can seem a bit unexpected to the regular guests of the LNOBT. While talking to people I sometimes learn that classical and contemporary operas are not equal and should not be evaluated in the same way. Yes, the means of evaluation should differ. But does this mean that these styles cannot be equivalent to one another?

What stands behind the dramaturgy of Forever and a Day?

Ingrida. Decisions that are made in music, directing and choreography. The dramatic background that I write is in direct contact with Itzik’s choreography and direction. There is also an indirect correlation with Rita’s music, that is conceived as Itzik analyses her creations.

Rita. I think that the dramaturgy will also strongly depend on the interpretation offered by conductor Ričardas Šumila – he will receive not the poems, but a finished opera; in other words, a work in which music is already blended with the text. Then he will interpret this work in his own way.

Ingrida. The dramaturgy of Forever and a Day is primarily rooted in ten poems, which were written by Itzik during different phases of his life. In the initial stage of the creation of dramaturgy, choreographer introduced his visions along with the poems – how he imagines the action on stage. During the second stage there is an obvious fluctuation of visual material, depending on Rita’s music. Then comes the expression of performers – it is very important to avoid illustration of what they’ve read, the poems cannot become superficial. Also, the dramaturgical text must not reveal too many facts that the director tends to keep to himself – the reader must interpret these facts on his own.

Having this goal in mind, Itzik asked me to offer an interpretation of poems that would create a certain kind of fiction. My task is to create a suitable narrative, concept, backbone, which would connect all poems. It doesn’t even have to be just as Itzik imagines it: sometimes he wants to reveal certain feelings, thoughts, memories, and to conceal others. This is where I step in, widening or narrowing the context – this is how the aforementioned fiction comes to life.

Rita. While working in the genre of opera I almost never encountered a classical storyline or libretto. I only collaborated with contemporary dramaturgs, poets, and they offered me extremely different materials. For instance, my opera Dresscode OPERA doesn’t even contain words – it consists of phonetic sounds, references of narrative in certain punctuation marks and remarks. I perceive the storyline of an opera as a connection that is being established between music and soloists. 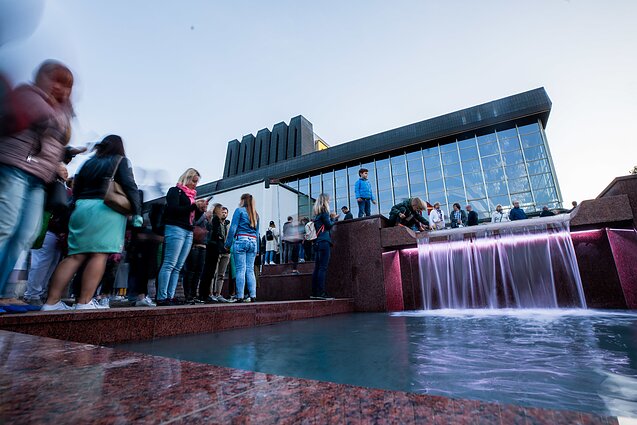 How do you suggest people who come to see Forever and a Day should prepare for it?

Itzik. I suggest they imagine that they’re coming to see a gala concert, in which opera singers shall perform ten different arias. A concert that will last forever and a day, and that shall speak of…

Rita. Love. It is the most important thing.

So the production will be about love?

Itzik. It is now my turn to ask: how would you call a feeling that a newborn first experiences in regard to his mother?

Ingrida. It is love.

Itzik. Of course. I myself started thinking about this only recently, when I realized that I have now less left to live than I have already lived. Love is four dangerous letters. I know a woman who spent her childhood taking care of the house, of her brother and sister; she never heard a kind word from her mother and she came home from work.

Later she grew up, got married, had her own children, divorced the husband. And only many years after the divorce did she realize that for this whole entire time she was trapped in the relationship that was established between herself and her mother. Where is love when it comes to this story? In the relationship that was formed in childhood, and that this girl perceived as love.

In part, this describes the subject of the production – the complexity that is born once human beings collide. In classical opera we often see themes of revenge, murder, disappointment, broken hearts, someone is always dying. In our opera no one will die, but there will be a great deal of sadness. Sadness is a very deep feeling, consisting of many layers; some of them lead to happiness: understanding, reconciliation, letting go. I’m certain that every member of the audience has the ability to identify with these aspect of life.

The interview and press release issued by the Lithuanian National Opera and Ballet Theatre was prepared by Aušra Kaminskaitė and was edited for brevity by LRT English. 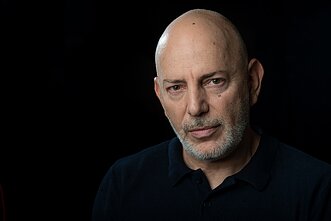 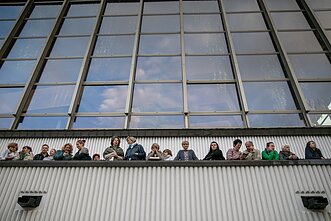 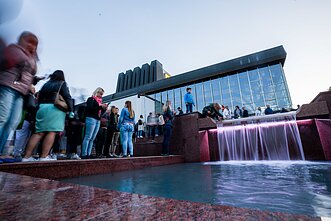