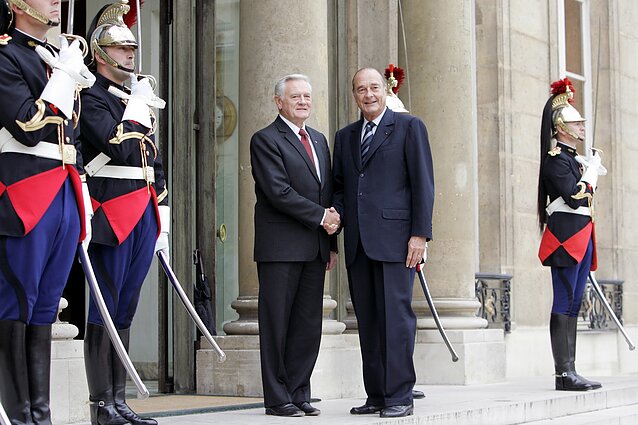 Lithuania's the then president, Valdas Adamkus, and Jacques Chirac in 2005 / AP

Former French President Jacques Chirac, who died at the age of 86 on Thursday, was a supporter of Lithuania's independence from the Soviet Union, Lithuania’s first post-independence leader Vytautas Landsbergis said.

"When I met him in Paris, he knew enough and was on our side. We have to remember him that way. He was a supporter [...] of Lithuanian independence. That really helped us," he told BNS.

Landsbergis recalled that he first met with Chirac, who was then the mayor of Paris, after Lithuania had already declared independence on March 11, 1990.

"Chirac then [...] promised that a proper place would be found in Paris to accommodate an information, almost diplomatic service of Lithuania. That was a huge achievement. We had no time nor need to realise it, because the fall of the Bolshevik putsch in Moscow in August triggered a flood of full recognition of our independence," Landsbergis said.

According to Landsbergis, Chirac, who served as France's president between 1995 and 2007, helped to resolve the issue of Lithuania's embassy premises in Paris, and his personal favorable attitude was helpful in Lithuania's NATO and EU membership bid.

Valdus Adamkus who was the Lithuanian president during Chirac's presidency, said that the French leader was surprised by Lithuania's hospitality during his visit to Vilnius in 2001.

"I have very fond memories. I remember his admiration, in Vilnius, for our Lithuanian hospitality," Adamkus, who served two terms as Lithuanian president between 1998 and 2009, told BNS.

"He told me he had invited his wife to go with him, but she thought that Vilnius was not a very interesting city," said Adamkus."Chirac said he would tell his wife [...] she had to regret the decision not to go with him," he said.

"He was sincere in helping us deal with security issues and was interested in Lithuania's affairs, especially in the field of education and cultural cooperation," the former president said.

"My relations with Chirac were very close, warm and sincere; we perfectly understood each other during our communication," he said.

Under Chirac's presidency, France decided to pay compensation to Lithuania for its pre-war embassy building in Paris which had been taken over by the Soviets.

A fierce opponent of the Iraq war, Chirac told Central and Eastern European countries which supported the intervention that they had "missed a good opportunity to keep quiet".

Valionis recalls having talked with the French president about Iraq on several occasions.

"There were frictions between us, too. Although presidents rarely speak to ministers, we had opportunities to talk about our commitments in Iraq," the former minister said.

According to Valionis, Chirac would not have supported Lithuania's accession to the EU and NATO if he had not seen benefits for France as well.

"Being a pragmatic politician and not being an altruist, he believed that you are as much favourable as you are able to prove a common interest. But Chirac realised that EU enlargement was beneficial not only to Germany, as it was often speculated at that time, but also to France," he said.

Lithuanian President Gitanas Nausėda said Chirac was a politician of international standing who sincerely believed in the idea of a united Europe, "and a leader who consistently pursued it".

"As president of France, he contributed greatly to the expansion not only of the European Union, but also of NATO," he said. 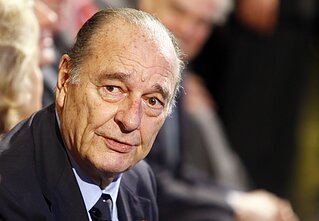 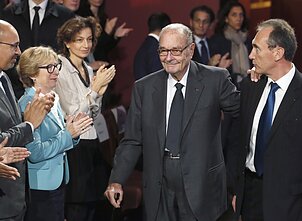