Estonia will not recognise Russian passports in Donbass, Lithuania calls for EU action 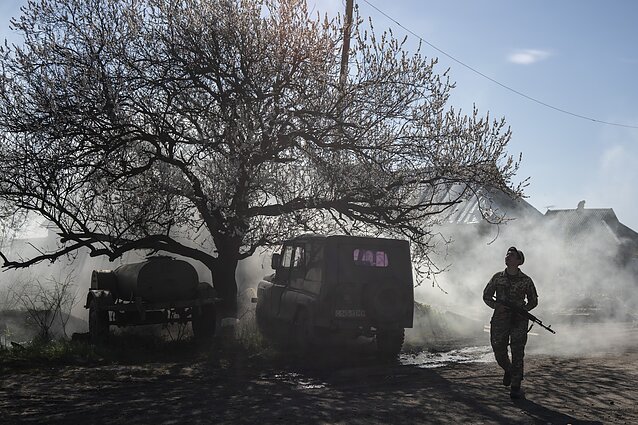 Near the front line in Donetsk Oblast / AP

Estonia announced on Monday it would not recognize Russian passports issued to residents of Ukraine's Donetsk and Luhansk Oblasts. Meanwhile Lithuania's Ministry of Foreign Affairs says it does not plan to follow suit with unilateral action, preferring instead a coordinated response from the European Union.

Estonia is the first EU country to take the step after Russian President Vladimir Putin signed a decree allowing Ukrainian citizens in the separatist conflict-torn eastern regions to get Russian citizenship under a simplified procedure.

“[It] is an additional attempt to undermine Ukraine's independence and perpetuate the current unstable security situation in Eastern Ukraine. This is fundamentally at odds with the spirit of the Minsk Agreements. Estonia's latest decision expresses our essential condemnation of such efforts by Russia,” Estonia's Foreign Minister Urmas Reinsalu is quoted on err.ee.

Meanwhile Lithuania's Foreign Ministry has told LRT.lt that it does not plan to take any steps separately from the European Union.

“Discussions are being held in Brussels where EU institutions and member-states are looking for ways to technically implement a coordinated and united EU policy of not recognising these passports,” the ministry said in a written statement.

However, should the EU fail to reach a common agreement, Lithuania does not rule out introducing “unilateral measures”, it added.

After Putin signed the decree in April, it was condemned by the United States and the EU. Lithuania then also issued a call on the international community “not to recognise the illegally issued documents and to consistently strengthen sanctions on Russia”.

A few days later, Ukraine's newly elected president Volodymyr Zelensky said he would offer the Ukrainian citizenship to all Russians suffering under the current Moscow government.