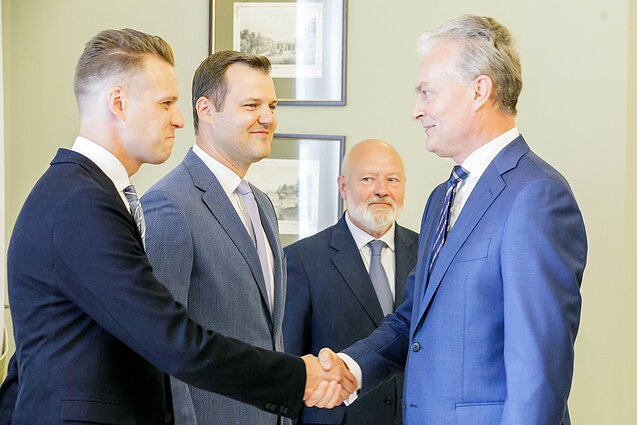 Lithuanian President Gitanas Nausėda and leaders of parliamentary opposition parties discussed on Monday possibilities for a minority government and an early general election.

“Possible scenarios were discussed (...), including a minority government scenario and a possible early election,” Povilas Mačiulis, the president's adviser, told reporters after the meeting.

The adviser added that such scenarios “are very unlikely, but things do happen in politics”.

“I think a lot will depend on how the ruling coalition manages to present good ministers and how consultations between the president and the prime minister take place,” he added.

The Cabinet is being reshuffled in line with the Farmers and Greens Union's new coalition agreement with the Social Democratic Labour Party, the Order and Justice, and the Electoral Action of Poles in Lithuania–Christian Families Alliance.

This week, Nausėda is planning to start meetings with candidates for Cabinet posts. Andrius Palionis, the ruling bloc's candidate for agriculture minister, will likely be the first to meet with the president on Tuesday, followed by a meeting with Health Minister Aurelijus Veryga on Wednesday.

The ruling bloc has decided to replace at least three ministers. Palionis of the Social Democratic Labour Party is likely to replace Giedrius Surplys as agriculture minister. Vladislav Kondrotovič and Jaroslav Narkevič of the Electoral Action of Poles in Lithuania–Christian Families Alliance are proposed for transport minister and interior minister, the posts currently held by Rokas Masiulis and Eimutis Misiūnas, respectively.

Mačiulis said Prime Minister Saulius Skvernelis has not yet formally nominated candidates for his reshuffled Cabinet.

Gabrielius Landsbergis, the leader of the conservative Homeland Union–Lithuanian Christian Democrats, told reporters after the meeting at the Presidential Palace that if a minority government were formed, his party would back key laws on condition that an early election be called.

“I can hardly imagine a minority government existing for almost a year and a half,” he said.

Eugenijus Gentvilas, the Liberal Movement's leader, sees a minority government scenario as quite possible, saying that the new ruling majority may fall apart if there is a split in the Farmers and Greens' group in the parliament.

The opposition politicians and the president also discussed which ministers could keep their posts in a reshuffled Cabinet, despite plans to replace them.

The Homeland Union and Liberal Movement leaders called for Defence Minister Raimundas Karoblis and Transport and Communications Minister Rokas Masiulis to continue in their posts, even though these portfolios should go to the Farmers and Greens' partners under the coalition deal.

Under the law, Lithuania should hold the next parliamentary election in October 2020.