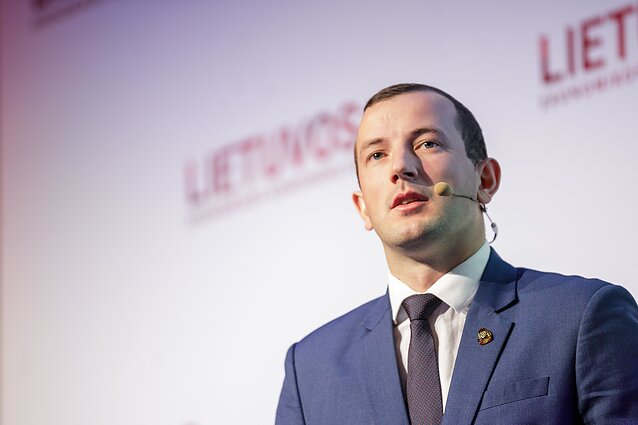 Virginijus Sinkevičius, Lithuania's current minister of economy and innovation, will be proposed as the country's candidate for the European Commission by the ruling party.

Sinkevičius was named by the leader of the Lithuanian Farmers and Greens Union, Ramūnas Karbauskis, on Thursday. He said his party would not support any other candidate in a parliament vote.

“We had a vote today on a candidate for European commission. The group unanimously supports the candidacy of Virginijus Sinkevicius,” Karbauskis told reporters on Thursday.

Sinkevičius said he appreciated the support of his fellow party members.

“It is early to say something. The political group has expressed their opinion, but let's not forget that there is the agreement between the president and the prime minister, and the government's nomination,” he said.

Meanwhile Prime Minister Saulius Skvernelis says that Lithuania's nomination will not be finalised before August. In Lithuania, the candidate for the European Commission is nominated by the government.

“If we propose a candidate and the try to look for a portfolio to fit the candidate – I am not sure that is the right way,” Skvernelis said. “I think we have to find and secure the area of responsibility [in the EC] that we want and then offer the best candidate for it.”

Foreign Minister Linas Linkevičius has expressed concern that the government is stalling the process of choosing its candidate, which may affect Lithuania's chances of landing a portfolio it wants.

Sinkevičius, 28, was elected to the Lithuanian parliament in 2016 with the Farmers and Greens Union. He was appointed the economy minister in late 2017.

The opposition says that the Lithuanian government has already missed the opportunity to secure and influential portfolio. Gabrielius Landsbergis, the leader of the conservative Homeland Union-Lithuanian Christian Democrats, says that he has heard from the European People's Party that negotiations on the distribution of portfolios in the next EC are effectively over.

“The last piece of news I got from the office of Ursula von der Leyen is that we're left with the scraps, what no one else wanted. That's unofficial information,” Landsbergis told reporters.

He added that other countries, serious about competing for influential positions, delegated political heavyweights, the likes of Latvia's former prime minister and EC vice-president Valdis Dombrovskis.