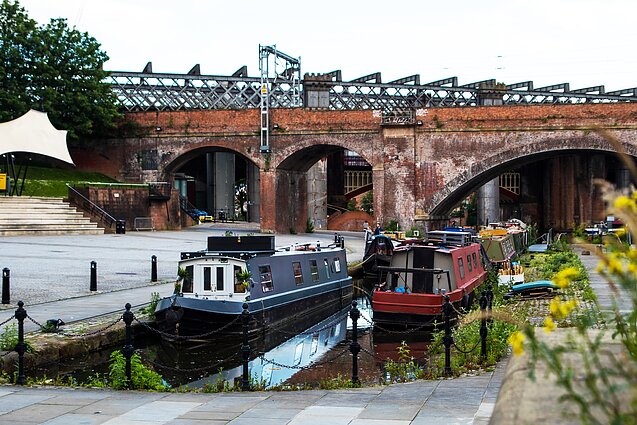 They bought a £50 dinghy, a £20 licence to allow them on the water and some bin bags before setting out into the filthy water of Rochdale Canal.

Raimondas 'Ray' Kazlauskas, 25, from the pristine town of Rokiškis in Lithuania, came to the UK three years ago. However, he got fed up of seeing the floating garbage as he walked to his job as an IT developer for a chemist firm in Manchester city centre.

So he and a friend, Evaldas Karosas, 25, from the same town in Lithuania, decided to act, purchasing the dinghy and a licence which gives them permission to take a boat into the canals for a week.

Following his impromptu clean-up operation, Ray, who lives in the city centre, told the M.E.N: "Every time I went past the canal I saw so much litter. After one year of walking past, it's enough; It's just annoying. There's geese and animals around and it looks a bit disgusting.

"It's enough. I needed to do something, I just got a dinghy and licence."

The two friends retrieved enough rubbish from the canal to fill five bin bags, most of it discarded plastic but also tennis and golf balls, a plant pot, unopened packets of sweets, rubbish-filled bin bags, toys and even a broken kettle, and a huge tennis balls.

"It was a beautiful day and I had a really good chat with my friend and we met a lot of nice people to be honest, giving us the thumbs up and saying thanks. It was really nice," said Ray.

He said he had seen geese playing with the rubbish and it had made him feel a "little bit sad".

Asked about his home town, he said: "It's very clean to be honest. I was a bit shocked when I came here. My first impression was that it was full of rubbish. It was a bit strange for me because I'm used to having a clean environment around. I can live here, of course, it's fine. I believe people behave differently."

In February, Manchester Evening News reported how between April 1, 2018 and the end of January this year, 12,560 fixed penalty notices were issued for littering in the city centre, an eight-fold surge that raised more than £500,000.

By law, the council may only use this money for its obligations under the Environmental Protection Act i.e. keeping public land free of litter.